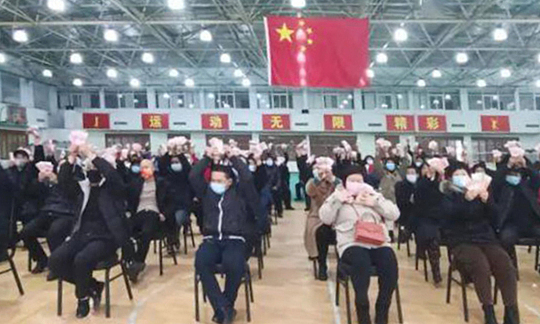 On January 25, a representative of Nam Phu Dien village in Y Xuyen district, Ha Nam province said that all 50 million yuan (178 billion VND) had been distributed to the people.

In the shared video, piles of cash are piled up behind a red sign with the words “Welfare of Nam Phu Dien Village in 2021”. Quite a lot of people were present in the hall, registering and receiving money in a very orderly manner.

Mrs. Vu, a village elder, shared that this year each resident received 5,000 yuan, and her whole family received 40,000 yuan. In addition, people are also given gifts and receive discount coupons from convenience stores in the village. “I’m so happy I don’t know what to say,” the woman said.

On the evening of January 27, Mr. Do, a member of the community committee of Nam Phu Dien village, confirmed that the welfare of the village increased year by year. In 2022, the amount people receive is 1,000 yuan higher than the previous year. In addition, on major holidays of the year, such as the Mid-Autumn Festival, or the Lunar New Year… the government also gives gifts in cash or in kind, gold and silver to families. Villagers get free electricity and water every month.

Many Chinese internet users asked, “Why is Nam Phu Dien village so rich?”

According to Mr. Do, the village is located in the center of Y Xuyen district, mainly developing trade in the form of a collective economy. From a poor village, in 2001, the new secretary implemented a series of policies to promote the economy such as industrial development, ecological agriculture, tourism and resort combination. After those changes, large shopping centers sprang up, along with many hotels built in the village.

By 2005, Nam Phu Dien village had accumulated a considerable budget. From 2008 to 2015, the government used this accumulation along with mobilizing capital from the people to build a 30-storey commercial center for rent. In recent years, large domestic enterprises have massively invested in this area, and many golf courses have been inaugurated. In Ha Nam province, Nam Phu Dien has become a community cultural center of international standards.

According to the report, in February 2021, Nam Phu Dien village with a population of less than 8,000 people owned 5 shopping centers with 230,000 m2 of floor space, paid annual welfare payments of about 40 million yuan, and accumulated the budget. community more than 5 billion yuan. From this money, the village leader made a “social welfare book” for the families and each person received an annual dividend.