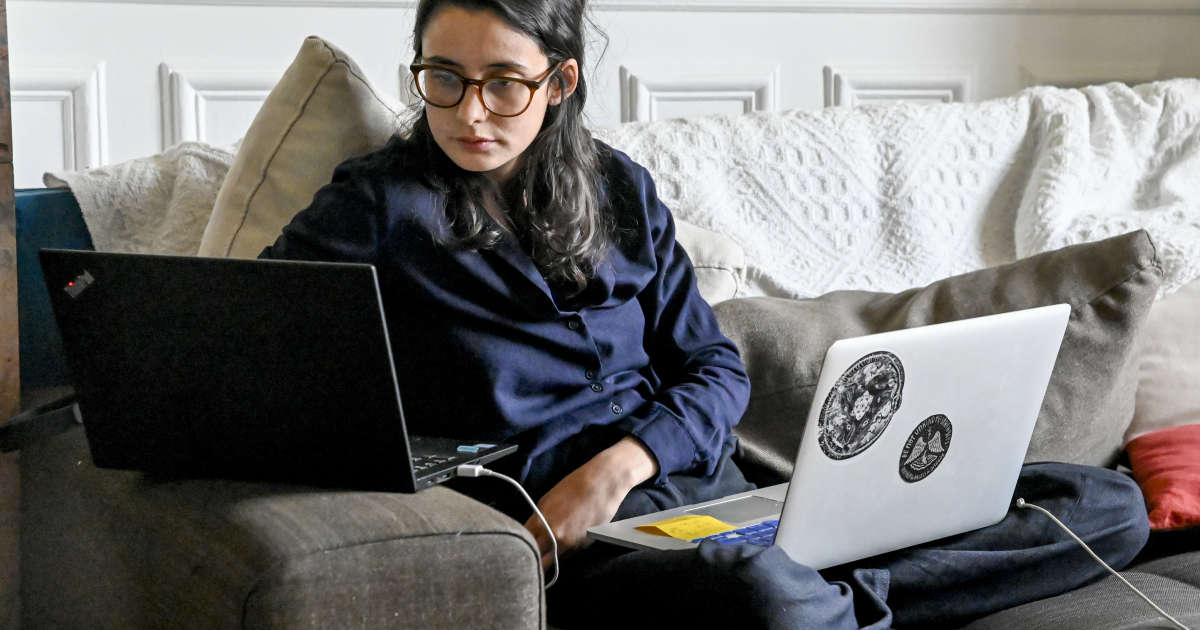 Employer and union organizations are starting negotiations on Tuesday to further regulate teleworking, to which the French are again forced to resort massively, after Emmanuel Macron called for it to be generalized to contain the epidemic.

This meeting had been fixed on September 22, well before the speech of the President of the Republic of October 28.

It had been torn from the forceps from the employers by the unions, who demand a negotiation for a national interprofessional agreement (ANI) on telework since the spring, when five million employees found themselves working overnight. home.

The Minister of Labor, Elisabeth Borne, urged the social partners to “Move quickly on this agreement” who “Will be able to give benchmarks to all companies on teleworking”.

Teleworking is “not an option” but “an obligation”, insists Elisabeth Borne

In October, before the request of the President of the Republic to generalize it, 1.8 million employees were still teleworking, according to the statistics service of the Ministry of Labor (Dares).

The refusal of the patronage

For a long time, the Medef refused any negotiation, considering the “Corpus of perfectly applicable legal rules and standards”. And unlike the unions, the employers want the future agreement, if there is one, to be “Neither normative”, “Neither prescriptive”, that is to say not binding.

François Dupuy: “There are winners and losers in teleworking”

The other employers’ organizations are on the same line. Negotiation must be successful “To a guide of good practices, so that each employer can take up teleworking with room for maneuver as close as possible to his situation”, suggests Michel Picon (U2P).

Serge Hefez: “A re-containment will worsen the psychological fragility”

Eric Chevée, from CPME, is open to “A guide or a framework agreement”. Above all, CPME wants the negotiations to focus on teleworking “In an emergency” (health, environmental, industrial accident), “So that companies are not taken by surprise like today”.

On the other hand, it did “Not the same appetite” to review the rules governing teleworking in a “Normal”.

“We are going to negotiations to have a prescriptive and normative agreement”, answers Jean-François Foucard (CFE-CGC).

For the CFE-CGC, “it is not telework, but degraded home work”

“I don’t see why we have to separate teleworking in a crisis situation and traditional teleworking. We will not sign just any agreement ”, warns Eric Courpotin (CFTC), who judges “Inevitable a prescriptive and normative agreement in the current context”.

“The CFDT asks (…) that we leave each other when we have completed this negotiation”, insisted on Friday Laurent Berger (CFDT).

“We are not going to take a month and a half or two months in this period of massive teleworking to come to an agreement”, he warns.

Discussions are therefore likely to be tense on Tuesday, where negotiators will meet from 9 a.m. by videoconference, Covid-19 requires.

Support for costs related to teleworking

Among the topics on the table, the unions want to address the workload, the right to disconnect, the coverage of costs related to teleworking, people with disabilities or gender equality.

On the management side, expectations relate to volunteering, the reversibility of teleworking, the anticipation of its implementation, the diversity of workplaces (coworking, third places), the training of managers and managerial practices, the integration of new collaborators.

A consensus has emerged around one point: the psychosocial risks linked to discontinuous teleworking, as it is again shaping up.

“Not everyone is equal when it comes to teleworking. Some suffer from great loneliness ”, underlines Michel Picon.

“After the first confinement, employees left completely damaged and weakened. Not sure they are holding up this time ”, adds Mr. Foucard.

The second meeting is scheduled for November 23, and more may follow.

Can middle management disappear? Here’s what teleworking does to our chefs

Currently, the legal framework on teleworking is based in part on the ANI of 2005, which in particular gives it a definition and lays down the principle of volunteering. It was partially transposed into the simplification law of 2012. The ordinances reforming the Labor Code of 2017 simplify the use of telework, but “Also go back on certain achievements” of 2005, as the assumption of expenses, according to the unions.