The first gold medal on August 7 belonged to Kenya’s Peres Jepchirchir after she finished first in the women’s marathon. Peres finished his part in 2 hours 27 minutes 20 seconds, 16 seconds faster than second place Brigid Kosgei (also of Kenya). Molly Seidel of the US won bronze in this content with a time of 2 hours 27 minutes 46 seconds. 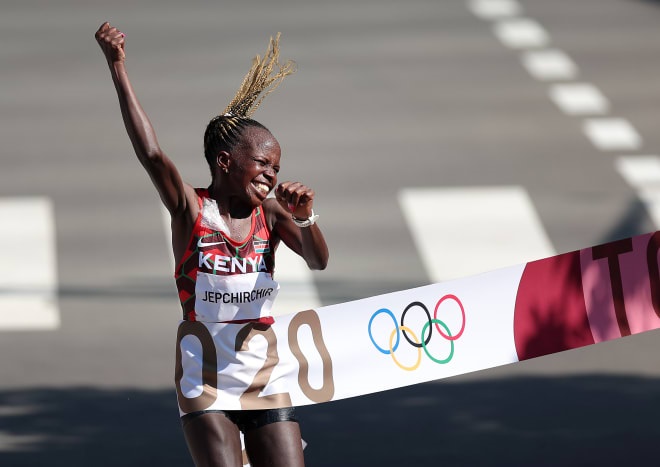 On the Tokyo Olympic medal table by the end of August 6, the Chinese sports team continued to lead the table with 36 golds, 26 silvers, 17 bronzes. The US ranked second with 31 gold, 36 silver and 31 bronze. Host Japan ranked third with 24 gold, 11 silver and 16 bronze. Entering today (August 7), the US sports team hopes to have more gold medals to chase China on the medal table. The men’s basketball, men’s softball and women’s water polo teams of the United States will all enter the finals.

In the men’s Kumite weight class, the American team also had a fighter, Irr Brian. Meanwhile, the trio of Kipyego Sally, Seidel Molly and Tuliamuk Aliphine Chepkerker are the hope of the American sports team in the women’s marathon final.

In addition, American fans also participated in the finals of the women’s high jump, women’s 10,000m run, men’s javelin throw, men’s 1500m run, and women’s and men’s 4x400m relay. Therefore, it can be said that today’s competition day promises to bring many gold medals for the national sports team.

China has the opportunity to consolidate the No. 1 position

And it is impossible not to mention diving, a subject that China has always shown absolute strength in many Olympic Games. Two athletes Cao Yuan and Yang Jian are expected to bring home gold in this forte.

The Philippines is one of three sports delegations of Southeast Asia that have won a gold medal at this year’s Olympics. Philippines is currently ranked 52nd with 1 gold, 1 silver and 1 bronze. And today (August 7), they will definitely improve their position on the medal standings.

The reason is because Philippine boxer Paalam Carlo will enter the final of Men’s Fly Boxing and his opponent is Yafai Galal (United Kingdom). Therefore, Carlo at least brought home one more silver medal for the home team.