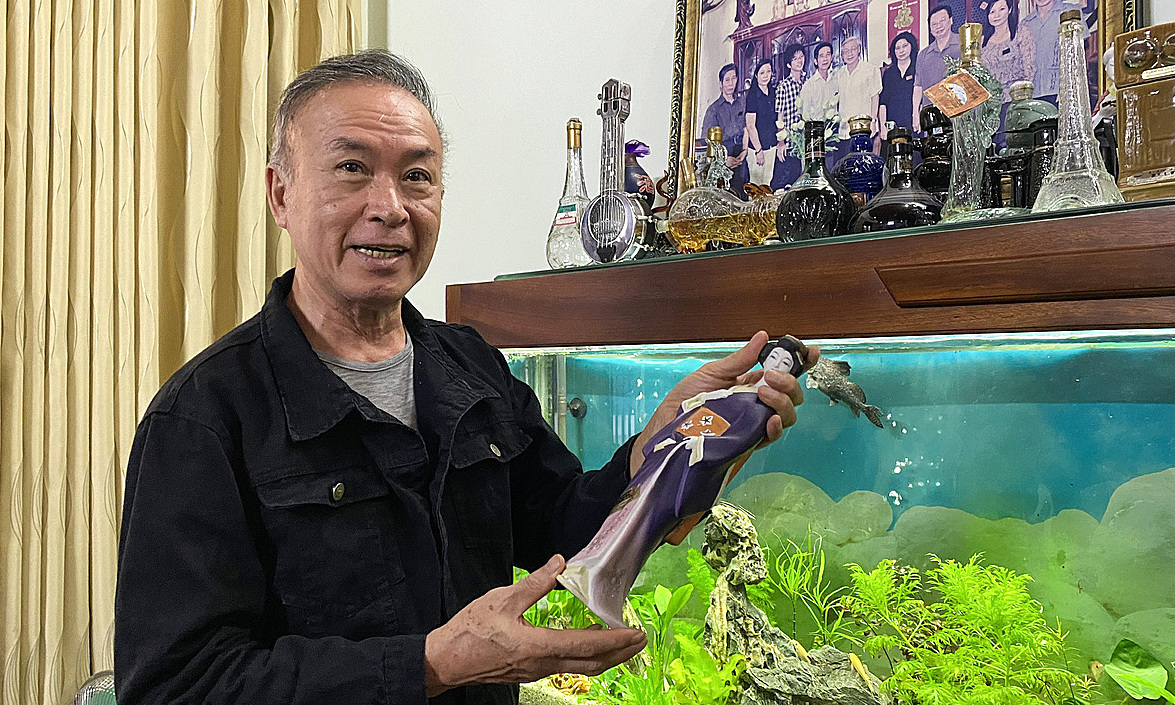 HanoiMore than 200 bottles of all shapes and sizes from many countries around the world are cherished and kept by Mr. Hoa as treasures after 18 years of collection.

In the last days of October, when it was humid, Mr. Nguyen Khanh Hoa went up to the 4th floor of his house on Linh Lang Street (Ba Dinh) to check the “treasure” of hundreds of strange shaped wine bottles.

“No one keeps collectibles in crates under the bed like I do,” laughs the 71-year-old diplomat. Mrs. Quy, his wife once complained that “people collect all the beautiful things, our family buys all the crap”. He explained: “When I was at work, I was alone in a foreign country, so I collected this dish to reduce sadness.”

Mr. Nguyen Khanh Hoa graduated from university in Cuba in 1973 and has been working at the Cuba – Latin America Department (now the Americas Department, Ministry of Foreign Affairs) since 1980.

In 2003, when he was a political counselor at the Vietnamese Embassy in Argentina, he had the opportunity to visit the home of the great writer Pablo Neruda – who won the Nobel Prize for Literature in 1971, in Isla Negra, Chile. As soon as he entered the door, he was overwhelmed by the objects “like a miniature museum” displayed in front of him.

Originally a diplomat, with money, Neruda traveled to many places and owned countless precious artifacts. From the masts of the ancient ships of the world, the fangs of the rare Mediterranean whale Narval, to the mask collections of many countries, the butterfly collection with butterfly specimens of all sizes, colors, and colors. colors are scattered throughout the house. And in a corner of the room, the Vietnamese diplomat was attracted by a collection of strangely shaped wine bottles.

The desire to collect something in him was growing. But the state-issued living expenses are only 400 USD per month, collecting antiques like Neruda is out of reach for Mr. Hoa. He came up with the idea of ​​​​collecting strange and unique wine bottles because they are often symbols of each culture and are cheaper than traditional antiques.

Since then, during his tenures in Argentina, Chile, Uruguay, Mexico and Cuba, Mr. Hoa formed a habit of going to flea markets on weekends to hunt for bottles of wine. Depending on the shape and rarity, each bottle costs from 10 USD to 200 USD. The salary was tight, so he also had to hone his bargaining skills, although he rarely lost more than 5 USD. Many times when he found a beautiful item, he liked it so much that he fell in love, but had to put it down because the price was too “expensive”.

“Like second-hand goods, each bottle has only one model, if you don’t buy it, you lose it,” he said.

Pointing to each bottle of wine, Mr. Hoa said, each one has its own background, showing the cultural characteristics of each country and has an interesting shape like the Russian knight, the great father of England, Black dancer of the Caribbean Sea, a drunk guy standing holding a Japanese lamp post… Most bottles are made of glass, ceramic, porcelain, or a combination of wood and metal is very sophisticated.

Among the purchased items, Mr. Hoa regretfully told about the Murano colored glass bottle of Italy. It is a handmade product, depicting a unique shape, very harmonious colors. After many times of betting and begging, he finally had to spend 150 USD, more than a third of a month’s salary to buy it. Unfortunately, it broke during shipping home.

Having worked together at the Vietnamese Embassy in Mexico 15 years ago, Mr. Ngo Tien Dung, 61 years old, residing in Hoai Duc district many times was led by colleagues to the flea market. “Whenever he buys a rare shell, he meticulously washes it and then sits and watches it forever,” Mr. Dung said.

Every time he returned home, the diplomat’s suitcase had no chocolates, perfumes or other imported items, instead just bottles of wine tightly wrapped in clothes. Knowing her husband’s hobby was a bit strange, but Mrs. Quy never stopped her. “I only dare to buy really unique things because my salary is limited and I still have to spend money to take care of my wife and children,” said Mr. Hoa.

After 31 years of work, in early 2011 he retired. Since then, the collection has barely been replenished. Some friends offered to help. Thought it was easy, but in the end everyone shook their heads because the “unique – strange – rare” criterion was not simple.

At the Exhibition of elegant hobbies of Hanoians on the occasion of the Lunar New Year 2011, Mr. Hoa brought a part of his bottle collection to display. In addition to compliments, one person left a comment “collectors should be more nationalistic”, seeing many bottles of foreign wine, but Vietnamese goods are too poor. He agreed, but said it was a difficult task because Vietnamese people still have a strong mindset that quality is more important than form. “Many countries I go to, they sell both wine and bottles. Our wine is good, but almost never comes in beautiful bottles with strange shapes,” he shared.

Spending $5,000, the 71-year-old man now owns 200 bottles of wine from about 30 countries and territories, such as the UK, France, Italy, Germany, Russia, Poland, the US, and Canada. Latin America, Japan, China, Korea… Someone offered to buy the whole set, but he shook his head. “If you keep it, you still have something for friends and lovers to come and enjoy. If you sell it, you only get the papers stored in your wallet,” he said.

In the near future, he plans to build a few display cabinets for the collection, attaching “personal information” to each bottle for easy understanding. At that time, he could welcome friends to enjoy the items he “gathered up after more than 30 years of wandering and fighting in foreign lands”.