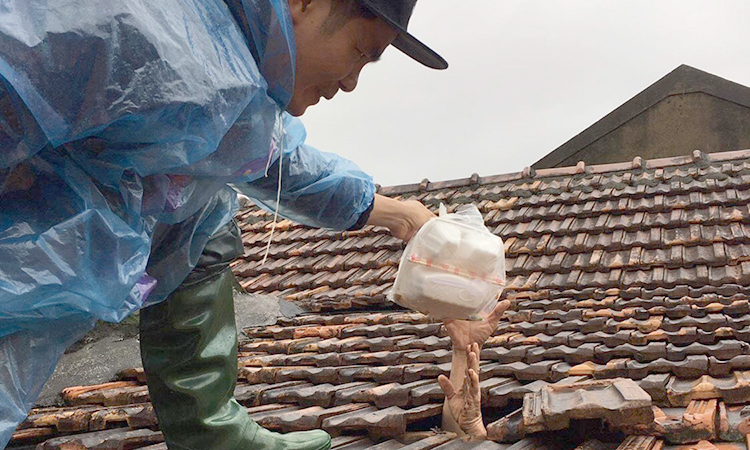 Quang BinhOn the morning of October 18, my mother just pushed the mud on the porch after 3 days of flooding when the rain poured down again and the water started to rise. The second flood began.

Ms. Quynh Huong, a lecturer at the Da Nang Pedagogical University, Dong Tu village, Hien Ninh commune, Quang Ninh district shared the story of the days of living in floods in her hometown.

In the family chat group, my sister constantly updates: Water has reached the last three levels, water has fallen on the porch, water entered the house, water has slipped off the feet …

On the evening of October 18, Dong Tu village was completely submerged in water. My mother sat bewildered, looking around at the altar and began to soak each of the galleries. My brother-in-law swam over from another house, together with his youngest sister-in-law, lit incense and carried the father’s altar upstairs. In the chat group, the eldest sister sent a picture of a buffalo taken to the highest point in the house and now only see black streaks on its back waves and its nose still trying to rise above the water. “Water broke his leg (leg), it would just give up”, she texted.

My Dong Tu village is located between two rivers, called “flood village”. My house is newly renovated, solid and the closest to the village, but the water still reaches my chest. The youngest sister-in-law manages to work with her old mother and two young children, and her husband is far away. Water entered the house and gradually rose, people on the second floor were not flooded, but the rain fell as wet as the sky. Water splashed through the window and back onto the floor. My grandmother and mother tried to sweep, push, and slap the water out but couldn’t.

At 8:00 p.m. on October 18, my sister announced that she was bruised and scratched her limbs due to trying to carry furniture and hold two pigs up. Like my sister, everyone in the village tried to save the property in the house. They tried to get taller, raise a little bit more, but could not beat the water level. Beds, furniture, finished pots … floating in the floods, drifting everywhere. Behind, my uncle’s house flooded close to the roof, there was no place to hide. Next to it, a house with a attic built a long time ago has reached the 2nd floor.

My village is now full of old people, young children, young people who have gone away to settle down. The nephew from Japan called: “My family is still better, my friends’ family is very guilty, auntie, it’s all gone, can’t move yet, don’t know if there’s something left to eat?”

The night I lay listening to the rain, I imagined tonight would be a very long night in a vast curtain of water. When I wake up in a flutter, I reach for the phone to read the news.

“Save Dong Tu village with the water flooding too big, many houses are about to run out of places and need to be relocated to the high house. Currently the village’s boat is broken and can not do anything, looking forward to quick relief!” My son is the deputy head of Dong Tu village calling for help.

I trembled and shared the status line. Under the comment line, my friend said: “Now the water is big and flowing, it is dark, some boats with small capacity (coler machines) cannot and dare not run in, must wait for the morning sky”. Nobody sleeps. Her sister-in-law texted: “Hear many cries for help, including cries and cries: Pig is dead, crawl is gone!”.

On the morning of October 19, news from his sister-in-law: “The rain stops in the morning, the water drops a little, I hear everyone calling.” She sent a photo of everyone waving from afar and added the caption: “Despite the wealth soaked in water, everyone in the village seems to be so safe and optimistic.” Her news made our mornings lighter.

But it still rains, the water rises again, the news is no longer updated regularly. Some people are exhausted, others have low battery power, our questions are no longer answered as before. My sister texted only one sentence: “Text a while, to save battery”. On Facebook, the village friend plays a live clip about your group has just saved a woman named Mo stuck in a nearly flooded house at the end of the village. Being rescued, Ms. Mo is still frightened and sobbing on the lifeboat.

I texted my friend about the situation of an old mother alone in the countryside, she said, she went up to look up (the mezzanine near the roof) to sit, the food for 3 days, the water was about 1 meter away. You also sent me a message of encouragement: “Either way, everything will be fine!”.

Today 20/10, I bring this spirit to congratulate my mother and sisters. I wish my loving women out there be strong as warriors, resilient to get through the toughest days of my life. In response, my sister-in-law texted: “O youngest, rest assured. Now everyone’s family is superman”.

At the end of the day, I texted my cousin about my aunt’s situation in a neighboring village, she texted: “In general, her survival skills are good, so I am not afraid, I am just afraid to get tired and get sick”. I sent a picture of my aunt smiling very brightly at the shelter in the cramped dark corner. I’m relieved.

Three days the flood kept playing games up and down, now it still stands still. Some people in my hometown are exhausted. Some people have started running out of water to drink food. There were first relief shipments, although it was difficult to move and send items in.

Still worrying a lot, but I believe, as my friend said, no matter what will be fine. Because my relatives share each other well; because the hearts of the whole country are still heading. Because our children away from home still stay awake in the same country.