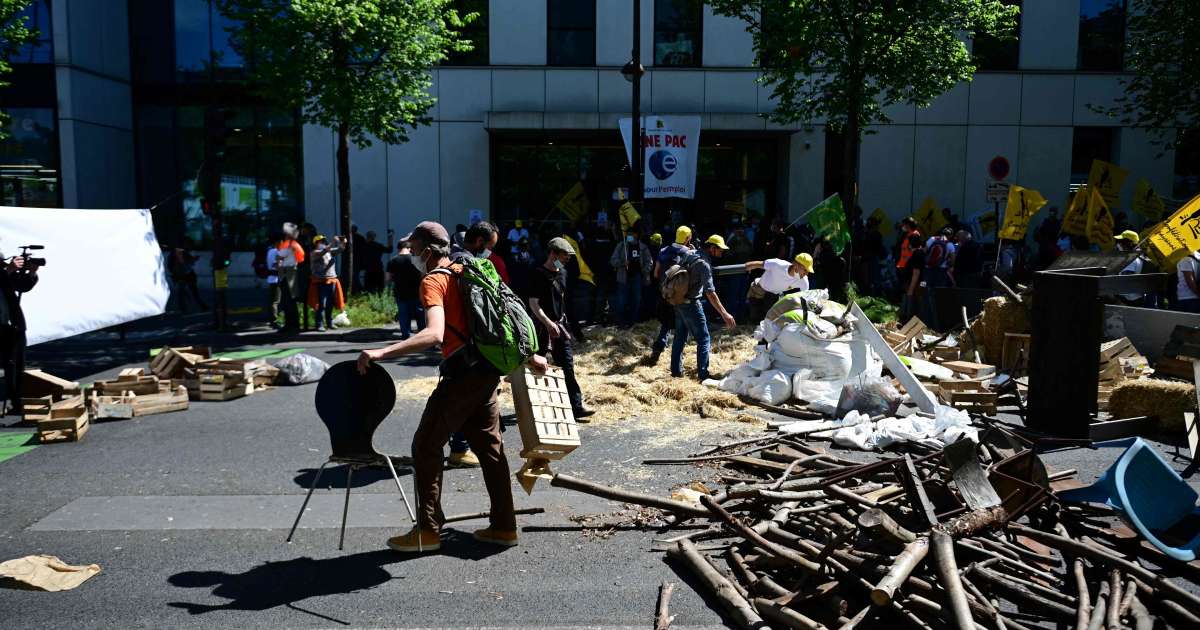 About 200 farmers demonstrated this Thursday, May 27 since the end of the morning in front of the premises of the general management of Pôle Emploi in Paris, in order to challenge the President of the Republic Emmanuel Macron and obtain a common agricultural policy (CAP) more oriented towards the employment, AFP noted. At the end of the afternoon, farmers who still occupied the hall of the Pôle Emploi headquarters were evacuated manually by the police, according to videos posted online.

The demonstration took place calmly, despite some jostling in the early afternoon, when the police wanted to enter the building. On Twitter, the Confédération paysanne denounced a “Very violent charge of the police inside Pôle Emploi and outside”.

From the start, around thirty activists entered the entrance hall to request an interview with the general management of Pôle Emploi, in order to “Negotiate a meeting with Emmanuel Macron”, Véronique Marchesseau, secretary general of the Confédération paysanne, told AFP.

Guillaume, farmer: “They are killing us”

After an interview with the deputy director of Pôle Emploi, she indicated that she had received the assurance of “Transmission” of its request through the Ministry of Labor, on which Pôle Emploi depends.

At around 2:30 p.m., the police barred access to the building where the thirty or so demonstrators are located, some of them chained to the gates. They jostled several activists and the member for Ariège Bénédicte Taurine (LFI), who came to support the demonstrators. Images showed in particular the latter, identified with her tricolor scarf, pushed to the ground by a police officer. She denounced the charge of the police: “Is that your response to the request for dialogue ?? “, she tweeted, calling on the government.

The action took place until then in peace, without blocking the comings and goings in the building. The demonstrators, on the other hand, blocked the street with crates and straw bales in particular. The administrative building was adorned with a banner “A CAP for employment”. Nicolas Girod, spokesperson for the Confédération paysanne, denounced “Trade-offs over stability which will mean that we will continue to lose 10,000 to 15,000 peasants per year”.

“When a farmer asks us for help, it’s because he’s at the end of his rope”

“They will meet here”, he lamented, pointing to the headquarters of Pôle Emploi. “We decided to come here, we decided to stay there. The weather is nice, it is not the ministry that we are calling, it is Macron! “.

“Respect us! We feed you! “, chanted the farmers in the lobby of Pôle Emploi, according to images posted by journalist Rémy Buisine.

At around 5 p.m., the farmers still present inside were evacuated by the police, reported BFMTV Paris.

According to the Confédération paysanne on Twitter, the demonstrators then organized a sit-in, before agreeing to leave the premises. The evacuation, tense, was still in progress at the end of the afternoon.

Agriculture Minister Julien Denormandie presented last Friday his first arbitrations for the next European Common Agricultural Policy (CAP), for the period 2023-27. Arbitrations deemed too little green and not sufficiently focused on small farms by organizations united in the collective Pour une autre Pac, of which the Confédération paysanne is a part.

“We, the agriculture we offer, it provides jobs”, said Véronique Marchesseau, who wants, among other things, a “Aid capping” to large farmers “For redistribution for as many people as possible” and a significant revaluation of the payment on the first hectares intended to support small and medium-sized farms.