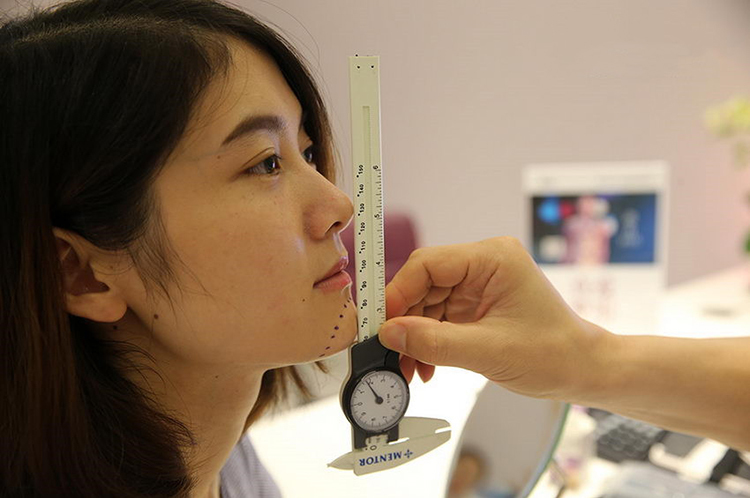 Kha Kha, 18 years old, was brought to the hospital by her mother to cut her eyelids, right after finishing her university exams. The doctor suggested rhinoplasty, saying that this combination would make her more perfect. At first, the female student was very interested, but later refused because she was afraid that doing two procedures at once would be painful.

For Kha Kha, a GenZ person, she considers plastic surgery a common and normal way of beauty.

When summer comes, the number of visitors to beauty salons and cosmetic hospitals in big cities in China increases rapidly. A doctor with 10 years of experience in Beijing shared that this is a golden time for the industry. “The largest number of visitors are students. They spend two months after the university entrance exam for eye surgery, procedures that take a long time to recover,” he said.

According to China’s “White Paper on Medical Beauty Industry 2021”, China’s youth demand for plastic surgery is increasing, with 51.9% of 18-25 year olds in 2021. This agency, people born after 2000 are becoming the main customer group of the country’s billions of people’s cosmetology industry.

According to the white paper, young people’s exposure and awareness of plastic surgery is divided into two stages. When they were students, they soon realized that they could change their appearance through aesthetics. The second stage is graduating from university and preparing to go to work, they need to edit their face to be more confident.

In order to attract customers, beauty establishments at this time are constantly launching marketing programs related to “summer break” and “graduation”. Institutions tout with coupons for people born after 2000 – the group that graduated from college this year, making plastic surgery “the best gift for graduation”.

Tieu Tieu, a doctor of a chain of cosmetic hospitals, said that this summer is the season for people born after 2000. “We have great promotions at this time such as launching “3 people together” go to beauty salon” or “mom and daughter have fun together”.

“Three people going to cosmetic surgery” will have a high discount. For example, the original price of double eyelid surgery is 12,800 yuan, if three people have the same aesthetic, only 9,999 yuan. The program “Mom and daughter are happy together” is a beauty project of mother and daughter. Many young people born after 2000 mostly have 7X and 8X generation parents. Therefore, some hospitals or centers offer packages such as “Mother and daughter go together, one person is free” or “Take your daughter to have a rhinoplasty, you can cut eye bags for only one half”.

Before that, many other facilities have launched slogans such as “cosmetic summer” or “graduation season plastic surgery” to entice users. In addition to direct advertising, many beauty salons actively approach customers through social networking platforms such as Douyin, Weibo, Xiaohongshu…

When friends called Luo Luo, 18, from Sichuan, she had just finished lip surgery so she couldn’t talk.

Lac Lac had plastic surgery at the age of 14. At that time, she was teased by her friends for baldness, so she asked her parents for a hair transplant. After finishing the university entrance exam this year, the young girl performed a series of procedures such as double eyelid surgery, widening of the corners of the eyes, acupuncture, facelift, rhinoplasty…. With about 10 upgrade categories. Such beauty, the total cost is 200,000 yuan (700 million).

Lac Lac explained that at first, she just wanted to cut her eyelids to make her eyes bigger, but then decided to lift her nose. In the end, she edited more and couldn’t stop. Currently, only her lips, she has also touched the cutlery 8 times. “My friends all have plastic surgery. Currently, for those of you who have never touched cutlery, I don’t know what to talk about with them,” she said.

Eye correction is often the first choice of young people having plastic surgery for the first time. Tan Tan, 17 years old, has just done a series of corrections including eyelid surgery, eye socket opening, liposuction. When she was in middle school, her mother discovered that her daughter had double eyelids, so she promised to have her eyelids cut after the university entrance exam. “Many classmates also went to have eyelid surgery after the exam. We often joke, try to go in groups of four to see if three people can cut, one for free.”

Wang Dan, an employee at a hair transplant facility in Shanghai, said that after the university entrance exam, there are about 100 hair transplant customers a week, of which nearly 20% are new students. According to Vuong, exam pressure causes many young people to lose their hair. Therefore, after the exam, cosmetic intervention is the first thing they think of.

In fact, young people in China want to beautify with cutlery more and more soon. However, not every age is suitable for plastic surgery.

Zhang Tao, a consultant at a cosmetic hospital in Beijing, said she once met a 16-year-old student who came to consult a nose job. The girl wants a high, slim nose like many famous actors. However, the doctor advised the girl not to touch the cutlery because she was still at a developing age.

Currently, many Chinese social media celebrities are converting into beauty vloggers. Because of this direction that many young people misunderstand, the tricks are appropriate for their age.

Dr. Tieu Tieu gives an example, thermage skin rejuvenation method is only suitable for people over 25 years old, but now many beauty salons still hang the sign “Anti-aging as soon as possible”. Therefore, some young people do anti-aging from the age of 20. There are even people who are underage but want to perform important plastic surgery, many facilities have hired people to pretend to be parents to complete the required procedures.

Zhou Tieu Huy, a psychological consultant, said that currently, young people born after 2000 are being bombarded by beauty ads, appearing everywhere. “This makes them like being hypnotized, having to be beautiful even though they can’t distinguish aesthetics to serve themselves or satisfy the eyes of others,” he said.

For example, Lac Lac, she understands that she has fallen into the trap of plastic surgery, so even though she has undergone many times of surgery, she is still not satisfied with her appearance.

“People say my facial features are very slim, like Barbie dolls, but I still find them ugly,” Lac Lac said. She winced every time she moved or bent down to pick up something, because her ribs had trouble getting cartilage to lift her nose.