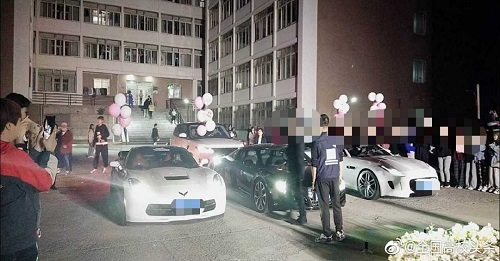 ChinaHe was proposed by his girlfriend when he brought a supercar, flares and flowers to the school, but Mr. Yang then had to “live in fear” for being criticized by internet users.

Surrounded by flares, flowers, balloons and hundreds of students, the boy knelt to propose to the dream person. Shouts and screams bustle the schoolyard as the girl, teary-eyed, nodded. Thought the ending was happy, but when the video was posted on social networks, the guy was strongly condemned by netizens because he thought he violated the school’s regulations.

Currently, the Dalian Polytechnic University is still closed to control Covid-19. School employees must register one day in advance, need a health code and report travel schedules in advance. Students are always in the school, outside must ask for permission.

“As a relatively well-known university in the Northeast, Dalian Polytechnic has such lax management. It’s really shocking,” commented one Weibo commentator. “Yes, there are other money”, “The truth proves that a rich child can do anything”, .. others are annoyed.

The male protagonist in the confession said he graduated from Dalian Polytechnic University, currently running a super car rental company in this city. Six cars on October 20 are owned by his company. “I make money with my labor, not inherit it from my parents as netizens think,” said the young man.

According to Yang, the day he confessed to his girlfriend, he scanned the QR code to enter the school as usual. After the incident caused a stir, the Dalian Polytechnic School contacted, Yang explained everything.

“Since it’s the first confession in my life, I want to prepare carefully to be sure and think my girlfriend deserves it. I just want to surprise her and now it becomes fear,” he said. boys complained.

Responding to the above problem, the representative of Dalian Polytechnic University said: “The school security room is currently investigating and resolving. The school is closed for management to definitely not let in. do wrong”.