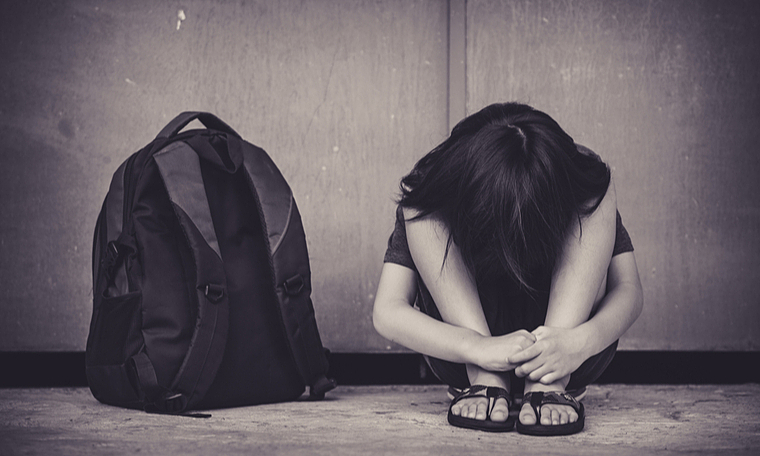 Mai Ngoc, 16, told how her life suddenly took a different direction since failing the entrance exam to the high school that her parents wanted.

“Every meal my mother is critical, insinuating or comparing with other people’s children makes me scared,” Ngoc said and added that for many months now, she often startled in her sleep because she still dreamily hears her mother’s voice next to her. ear.

The girl, a student at a private school in Ho Chi Minh City, admits that from a young age, her parents created all conditions for her studies, even if she spent any money she was ready. I also always try to have the best academic performance, to meet my mother’s expectations. From the day I went to school, Binh, Ngoc’s mother, chose teachers and classes because she wanted “the best learning environment”.

In addition to the main course, she registered for three additional subjects of Math, Literature and English on weeknights for her children. At home, she continues to tutor her children, the rule is not to stop before 11pm. “Sometimes, I complain that I’m tired, and my mother says, ‘I can’t finish eating and studying’. I choose to stay silent because I don’t understand when I try to explain, easy to be accused of being a liar, raising education to argue,” Ngoc sighed.

Nine years as a good student, always in the top 10 of her class, but Ngoc failed high school because she lacked half a point in Math. Days later, she was compared with friends by her mother, speculating that “getting involved in love” led to a decline in study. After that time, Ms. Binh collected the phone and forbade her children to go out to control.

From an active person, Ngoc became taciturn and quiet. “Mother doesn’t understand what I want, what I need, but only has to be perfect. I’m afraid of her mother’s excessive and domineering way of caring,” she said. Ngoc’s current situation is that she can’t concentrate, has limited communication, is afraid to go home and wants to go crazy when her mother constantly praises “other people’s children”.

Doctor Duong Minh Tam, Head of the Division of Treatment of Stress-related Disorders, Mental Health Institute, Bach Mai Hospital, said that the symptoms Mai Ngoc encountered were depressive syndromes. According to him, what is worrying is that in recent years there has been an increase in adolescent depressive syndromes. Up to 39% of people who come to mental health care in 2020 at the Institute of Mental Health are aged 14-19 years old. In which, the group of students at the end of middle school and at the end of high school make up the majority, usually good students, with good academic performance.

This situation occurs because children often do not confide in their families when they are sick; Parents do not recognize or admit that their children have mental problems. Therefore, patients often come to the hospital late and late.

The cause of depression in adolescence is deeper, stemming from the conflict between the young themselves and the concept of “good children, good students” in society, according to a study by Dr. Tam and colleagues in the year. 2020.

Not all children are depressed because of parental pressure. Psychologists and educators have noted that many young people put pressure on themselves. The better students study, the more pressure to achieve.

Until now, Thuy Trang, 20 years old in Ha Tinh, still feels shivers whenever she talks about the invisible pressure of students in specialized schools. A second-year university student in Hanoi told about the competition in the class, the pressure to maintain the rankings and the teachers’ expectation of winning high prizes, during her three years of high school.

In the 12th grade, Trang took part in the national competition for excellent students with the goal of winning first prize because she was the class president and was at the top of her class. But the female student only won the third prize nationally and witnessed the sudden change in attitude of the teachers. From the center of attention, Trang became invisible. The homeroom teacher entered the class only to congratulate the second-placed student, not caring about his existence. “They didn’t recognize the effort for many months, I even fell asleep on the table because of fatigue,” the female student recalled.

After that, Trang didn’t want to go to school because she was afraid of the disappointed eyes of her teachers. “I hated everything around at that time, my academic achievement went down because I felt unfair, humiliated and couldn’t find sympathy and understanding. But fortunately, my parents encouraged me to overcome,” she said. .

Assoc. Tran Thanh Nam, Dean of the Faculty of Educational Sciences, University of Education, Vietnam National University, Hanoi, said that for some students, test scores are synonymous with self-esteem and worth scores. Failure or failure to perform as expected means that the individual is judged as worthless, shameful, and unworthy of respect. This is one of the factors affecting the psychology of children.

According to Mr. Nam, there are many root causes leading to signs of instability in children such as spending a lot of time on social networks, making children less time for relatives and social relationships; Lack of experience in handling and solving situations and emotions; Physiological changes during adolescence; The need to exchange and make friends is limited, easily isolated and ostracized at school; Social pressure, especially academic pressure…

“Psychologically, some students tend to exaggerate the problem, seeing a small mistake as a big disaster; over-generalizing or always suggesting that they will not be able to bear it. All At these times, it is easy for deviant acts to happen,” said Mr. Nam.

Two years of online learning because of the epidemic made the relationship between Thuy Han, 15, in Hanoi and her mother become serious. Since high school, Han rarely talks to her mother due to disagreements and is often compared with friends of the same age. The conversation ended when the girl exclaimed, “I don’t understand you at all”.

Not trying to open her heart to her family, Han chose to be quiet, taciturn or pretend to be deaf as a way of protesting when her mother raised her voice. “I found silence quite effective because when I was bored, my mother stopped herself,” said the female student.

According to Young Minds (UK), a mental health research and support organization (UK), from 2017 to 2021, the number of children aged 5 to 16 years with symptoms of mental illness has increased by 50%. One in six teenagers has psychological problems. Some studies also show that social media has a negative impact on the psychology of teenagers.

A survey by research organization Common Sense Media published on March 23, showed that from 2019 to 2021, the average phone time among children and adolescents increased by about 17%, much faster than 4 years earlier. A 2015 Pew Research report found that 73% of 13- to 17-year-olds are allowed to use their smartphones freely, and 24% said it was “almost constantly online”.

Research by the American Psychological Association shows that teenagers who spend a lot of time using social networks, the internet, texting, playing video games have lower psychological health and are less happy than those who spend time outside. God. Notably, people who spent five hours a day using their phones were nearly twice as likely to develop depression as those who spent just one hour.

After many years of researching the work of supporting and protecting children’s rights, Ms. Hong agrees with the view that social networks are a double-edged sword. Many children look to the virtual world for entertainment and hope to share, but this is also an environment where they are led by some malicious groups and trends, increasing their ability to do foolish things.

Duc Anh, 18 years old, Nghe An, shared his academic pressure, his own incompetence when he failed college in a closed group on social networks with 23,000 members, hoping for someone to sympathize and share. . “It turns out that I’m not the only one under invisible pressure,” the male student said after reading many articles describing the feeling of fatigue and boredom because he was forced to be perfect.

In addition to encouraging comments, some people suggested “a painless release from boredom”. “They also sent private messages and gave specific instructions, but fortunately I was still awake enough to get out of the group and block negative thoughts from invading,” he said.

But not everyone is sober enough, rational as Duc Anh. Quynh Huong, 16 years old, Hanoi, was invited by a friend to join the group “Hate parents” with more than 2,000 members. “Mother always brings home discomfort and frustration at work. Whatever I do wrong, my mother scolds and even beats me. My mother makes assumptions and never listens. I need to find people. share the same situation to be empathetic,” the female student said.

“In the group, I found a lot of sympathy. Everyone shared their discomforts and frustrations with their parents, many people used obscene words. I know those statements and behaviors are not correct, but they make the mood. more comfortable”, Huong confided.

Hoping to understand, change the way of parenting, Ms. Thuy Kim, 52 years old, Hai Phong quietly set up a virtual account, ready to participate in groups that hate parents. “The way of parenting in the past was a bit extreme and rigid, separating parents and children. Instead of being a mother, I want to understand and be friends with my children. Even though I read your comments about parents, I It’s a little frustrating,” she said.

In order to prevent children from acting foolishly, Ms. Hong said, parents need to learn how to be parents, understand, be friends with their children and be careful for children to access social networks. “Each child has their own strengths. Do not let children be lazy but also do not create excessive pressure. Children do not have to go to university, study for a master’s or doctorate to be a good citizen. Just live in In a healthy environment, children will have a development direction”, the expert expressed.

Particularly for young children, Assoc. Dr. Tran Thanh Nam believes that negative thoughts and feelings when you face big disappointments such as failing exams, failing… are normal, everyone will encounter them. “But those are temporary thoughts and feelings. Over time and when you are calm, everything will change for the better,” said Mr. Nam.

As for Mai Ngoc, after two months of psychological treatment, the female student said she felt more comfortable, her mother was not fussy about studying. “I hope life is easier, I hope my parents don’t compare me with anyone else,” the female student confided.