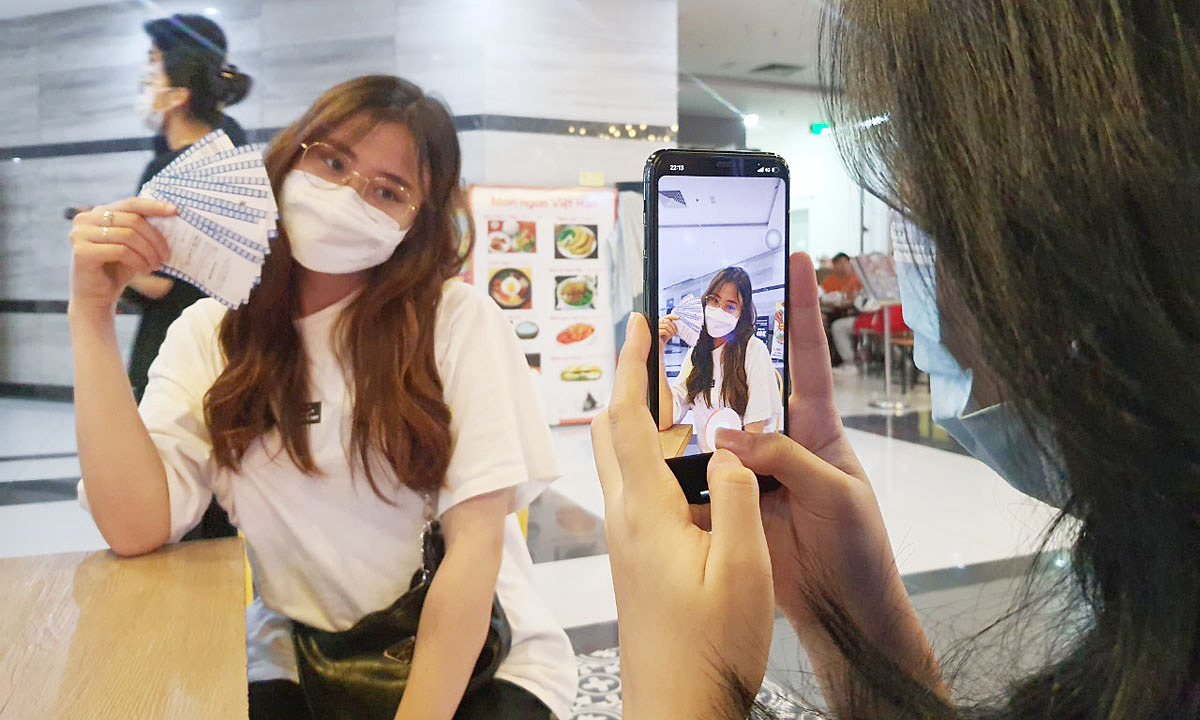 Quang Dung’s first date was “broken” by the phone calls to take selfies with his girlfriend.

On May 22, Mr. Dung decided to spend 10 million VND to buy a pair of tickets to watch the 31st SEA Games men’s football final between Vietnam and Thailand to invite his lover to watch and celebrate “successful confession”.

From the stadium gate to the stands, the girl asked Dung to stop and take pictures every once in a while. During the match, the girl leaned over, making all kinds of facial expressions to take pictures. In a thrilling moment, the girl turned to the stands, asking her boyfriend to catch the moment when the player on the field passed the frame. “This is how I post it to people to believe I’m going to the final,” explained Thanh Truc, his girlfriend.

While the audience on the field enthusiastically cheered for the goal, she worked hard to choose and edit photos to post on social networks. “I could not understand why in the midst of that joyful moment, she was still calm enough to take pictures and post them online,” said Quang Dung, 31, from Dong Anh, Hanoi.

Thanh Truc is not an isolated case. Along with the development of social networks and smart devices, more and more young people like to take “selfie” photos. In 2013, the Oxford dictionary editor (UK) chose selfie as “Word of the Year” because of the explosion of selfies. The frequency of use of the word in English increased by 17,000% that year alone.

Statistics of Statista In 2018, 62% of Americans confessed to taking selfies and posting them on social media platforms. In which, the group of young people aged 18-34 accounted for 82%.

In Vietnam, the “crazy” of taking pictures posted online is even greater. A survey by market research firm Q&Me Market Research in 2014, showed that 64% of Vietnamese like selfies, of which 28% take photos to change their avatar on social networks and 21% want to change their mood. On average, Vietnamese smartphone users take about 20 photos per week. People who regularly post pictures on Facebook will take more pictures.

“We are living in the ‘attention’ economy, a society obsessed with appearances,” commented Associate Professor – Doctor Tran Thanh Nam, University of Education, Vietnam National University, Hanoi. According to him, many Vietnamese people increasingly fall into the need to assert themselves and attract the attention of others through their own image.

Many scientific studies have found that when taking a photo and posting it on social networks, it gets a lot of likes, comments, compliments, and shows interest. It even increases the amount of dopamine and serotonin in the brain (the neurotransmitters that help us feel light, happy, pleasant). However, because of that feeling of pleasure, people who post photos tend to want to repeat with more and more frequency to enjoy the pleasant experiences again. Gradually they become addicted.

“This ‘addiction’ happens not only to young people but also to the elderly,” said Hoang Thu Huong, 32, from Hanoi, about the case of her 65-year-old biological mother who loves taking pictures, regardless of the situation. any. “During my grandmother’s funeral, my mother wore mourning clothes, stood in a melancholy pose to take a photo, and then immediately posted it online. The happy story was okay, the sad story also showed off,” she said.

Her mother used to be a senior manager of a business. Normally, she is always busy with work, social communication is very wide. Every Tet holiday, people come to the house to visit and give gifts. Two years ago, she retired, so her circle of friends narrowed, there were no subordinates, and social relationships gradually broke down. “I feel that my mother is constantly taking pictures and sharing them online as a way to hold on to the past glory, to want to be cared for and to be important,” she said.

According to psychology master Nguyen Thi Tam (HCMC), “narcissism” – too much love for yourself is one of the reasons why Vietnamese people like to take pictures.

“They love to be praised, to show off their wealth, luxury, and difference from everyone else. Like Thu Huong’s mother, sometimes something is lacking to show it off, afraid of being forgotten, not an important person.” Ms. Tam explained.

Because they are so absorbed in taking pictures, young girls like Thanh Truc miss out on other joys outside of the phone, losing connection with those around them. Standing in the middle of the stadium, but the girl could not feel the joy of victory, did not know which player had just scored.

Not only that, she also took the time and joy of her boyfriend. Quang Dung said that the following dates lost all meaning when going anywhere, doing anything around Hanoi, he also had to work as a “spouse” for his lover. “I want to get to know a more mature girl,” Quang Dung said.

Thu Huong’s mother also hugs her phone tightly, not bothering to make friends with neighbors, practice nursing or join clubs for the elderly.

According to expert Tran Thanh Nam, just because of his addiction to photography, many people become dissatisfied with their appearance. Mr. Nam cited data from the American Academy of Facial Reconstructive and Reconstructive Surgery, saying that up to 55% of patients want to have plastic surgery on the nose to become more beautiful when taking selfies but forget that the photos taken at Close-ups often distort facial features.

Accidents, “die by selfie” are becoming a strange epidemic of the digital age and social networks. A 2019 study found that, around the world, 259 people were killed between 2011 and 2017 while standing in front of smartphone cameras in dangerous locations.

According to psychologist Nguyen Thi Tam, the mentality of wanting to take pictures to show off online is also a clue to envy and denigration of others and the desire to show off more.

A team of authors from Nottingham Trent University (UK) and Thiagarajar University (India) confirmed that addiction to taking selfies (dubbed selfitis) is a serious psychological problem. Scientists have discovered that there are three levels of selfitis Boundary (taken at least three times a day but not posted), Acute (take photos at least three times a day and post them all on social media), chronic (uncontrollable need to take pictures and post them online).

Experts note, if you are immersed in the world of photos, then you should take a look inward. “Ask yourself why is this happening? How much time and energy did you spend on it? Did they create a strong connection with friends and colleagues from those photos?”, Assoc. Dr. Tran Thanh Nam poses a problem.

“It’s good to take pictures to preserve the beautiful moments, but don’t make it the only important activity in your life,” the expert notes.