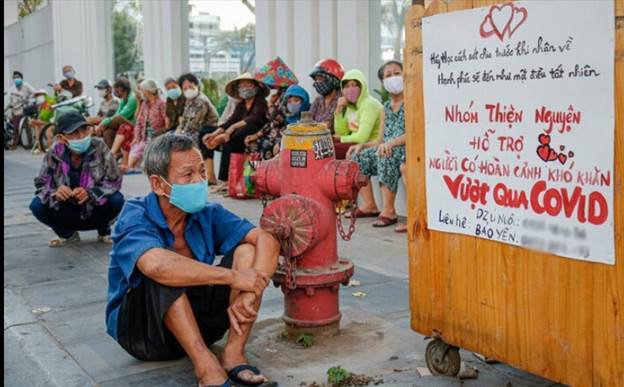 Salary reduction, job loss, unstable life … are the situation of some families in Covid-19 period, due to the difficulties in business activities of enterprises.

Covid-19 created a global crisis, hurting many poor people, workers and workers in some factories and factories.

In order to help her family in the countryside, including her husband who is constantly sick, 70-year-old mother and two children who are in grade 12 and grade 4, Ms. Tăng Thị Hồng Xuân (Tiền Giang) has to leave her hometown to Binh Duong to find a job in recent years. Applying to work as a worker in a garment company, Xuan thought she could support her family from her stable monthly income.

Xuan’s family currently lives in Hoa Phu hamlet, Hoa Khanh commune, Cai Be district, Tien Giang province. Her husband works on the farm at home and earns extra income when someone hires it. Because of his poor health, he often gets sick but could not afford to go to the hospital for medical examination due to economic difficulties. Since her husband was sick, Xuan became the main pillar in the house. With income from the monthly salary at the garment company, she sent home to pay for her two children’s school fees and support her husband and mother with meals, medical examination and treatment.

But when Covid-19 arrived, Xuan – the main economic pillar in her family became depressed, her daily life was disturbed. The company Xuan works for is severely affected when the world’s consumer demand falls sharply due to the epidemic. Although there are many forms of support for workers, the company is still forced to postpone three-month contracts with many employees. Xuan is one of the workers who had to quit her job since the beginning of September.

“If I continue to take a break after three months, I don’t know where to get money to take care of medicine for my mother and pay tuition for two children, the two children need to go to school”, Xuan shared.

Xuan’s family is not alone. Statistics from the Department of Labor, Invalids and Social Affairs of Ho Chi Minh City in the first 6 months of the year show that the whole city has 327,952 employees quitting. As of June 24, the number of people applying for unemployment benefits was 90,041 people.

According to data from the Department of Business Registration in 9 months, there are more than 78,300 enterprises withdrew from the market, equivalent to about 8,700 enterprises per month. The number of terminated business suspensions accounts for over 38,600 enterprises, an increase of nearly 82% over the same period and focuses on the group with capital size below 10 billion VND. The rest are pending dissolution or have completed dissolution procedures, about 27,590 and 12,090 enterprises, respectively.

The incident from Covid-19 made many workers more difficult, while life continued, children had to go to school, the elderly needed medical treatment.

The support from the government and community is very important to support workers in need. Capturing the real situation of the whole country and aiming to raise funds to support Vietnamese union members and workers who are severely affected by Covid-19, Saigon Beer, Alcohol and Beverage Corporation (Sabeco ) cooperated with the Vietnam General Confederation of Labor to launch the relay “Up with Vietnam” program.

Accordingly, more than 100 runners were selected from all different professions and fields to complete 1,875 km of “Heritage Trail”, starting from Ha Long City to Ho Chi Minh City and 145 km “Future Running Track”. with the end in Can Tho City. Runners will raise funds for the program “Up with Vietnam” through community links.

According to Sabeco’s representative, the program aims to raise funds with the amount of billions of dong to directly support workers, helping them overcome difficulties in the post-pandemic period. The total amount raised from the running program will be given to workers before the 2021 Lunar New Year.

To support the program, readers can donate via the payment gateway, independently donate through the program’s channel here or directly participate in fundraising by registering for a virtual run on the official website of the chapter. submit.

“The money generated from the program will contribute to help workers who have been experiencing difficulties slowly from the Covid-19 crisis overcome difficulties during the Lunar New Year 2021, towards a better future”, representative of Sabeco share.