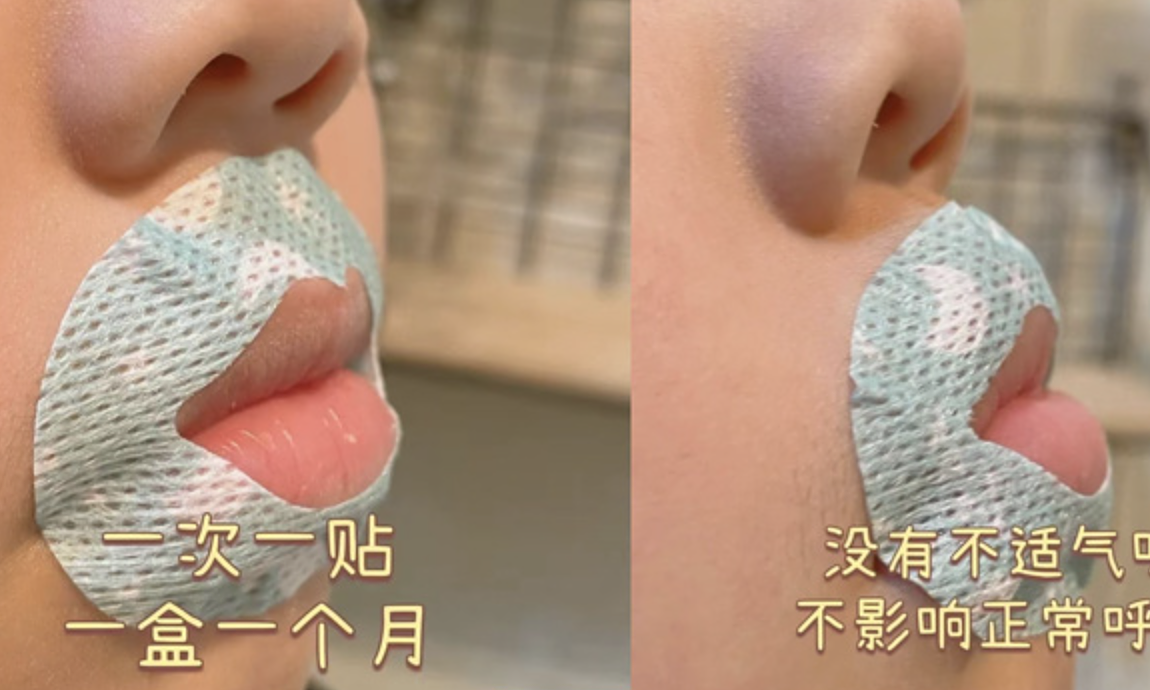 ChinaLi Zhenzhen covered his son’s lips with a special tape, believing that breathing through his mouth would ruin his appearance.

Since her son was 5 months old, Li has covered his mouth with duct tape before going to bed. This action was said by doctors as unnecessary and could be dangerous to the child, but Li did not care because he believed that this item would ensure his son’s attractive appearance when he grew up.

In China, more and more parents are taking extreme measures to ensure their children grow up in line with traditional beauty standards. For them, a child’s future success depends on appearance as well as education level, so early intervention is needed.

On social media, influencers are promoting a range of products that they claim can help correct a child’s visual defect, such as 3-year-old braces, box-shaped hats or curling braces. straight leg.

But health experts warn some products can seriously harm children’s health, causing brain damage and other illnesses. But contrary to worries, their popularity has not waned.

In a society that emphasizes appearance, many parents like Li Zhenzhen see good looks as a guarantee for a child’s future. “In the worst case without any strength, my child can still make a living by being handsome,” she said as soon as she saw her son breathing through his mouth, he was very worried because of the information shared. Online, breathing through the mouth is easy to cause children to have adenoid face syndrome.

Common signs of long face syndrome include long face size, prominent front teeth, short upper lip, and upturned nostrils. This leads many people to assume that any child who breathes through their mouth can develop the condition, and mouth tape is the way to prevent it.

Currently, there are about 200 products of mouth tape specially designed for children on the Xiaohongshu online shopping channel. More than 100,000 packs of children’s mouth masking tape are sold on Taobao every month.

Li has become a staunch supporter of mouth tape. It became her daily habit to gag her son when he slept.

However, doctors warn that oral bandages cannot prevent adenoid face, on the contrary, can be dangerous for users. The cause of the adenoid face is enlargement of the adenoid ducts (glands located above the roof of the mouth) and the tonsils. When the adenoid bulges, which can be caused by infection, allergies, or genetics, this blocks the nasal passages, forcing the child to breathe through his mouth to get enough oxygen.

Enlarged adenoid masses can be treated with anti-inflammatory drugs or surgery in severe cases. But mouth tape does nothing but deprive a child of vital oxygen, which can cause sleep disturbances, intermittent hypoxia, affect neurodevelopment, hearing loss, and even damage to the brain. brain injury.

Qian Wei, an ear, nose and throat specialist in Shanghai, said gagging a child’s mouth with patches is not the solution to a blocked nasal passage. “Putting an oral mask on without a doctor’s prescription can cause hypoxia and brain damage,” the doctor said.

In June, a 5-year-old child in Jiangsu province was said to have almost died from being embarrassed by a gag. The incident became a hot topic, sparking much debate about parents’ growing anxiety about their children’s physical appearance.

But the popularity of oral tape remains undeniable. Li didn’t know the product could pose a danger until she posted it on social media. The young mother quickly took her son to the hospital for a check-up and luckily, the child’s brain developed normally.

When asked by the doctor about the use of oral tape, Li still insisted he was right. “There’s nothing wrong with parents trying to make their children look good,” she said, adding that she continues to use tape on her son’s mouth to this day. Besides criticism, many other parents enthusiastically support, even asserting that the child will grow up to be a handsome man.

For doctors like Qian, the beliefs Chinese parents now place on social media are extremely disturbing, but difficult to refute.

Notably, the baby-beauty business goes far beyond mouth tape. Some children as young as 3 years old now wear braces 24 hours a day. In addition to mouth tape, parents also use products to wrap their feet tightly so that their children do not get bent; orthopedic baby skull cap with recommendation that if the nose is worn 23 hours a day for four months, the baby will show a round skull shape instead of flat and protruding forehead.

In the United States, doctors prescribe nose surgery if the child’s skull is deformed, but must be under medical supervision. But in China hats are widely sold online with prices ranging from 2,000 yuan to 20,000 yuan.

Xu, from Zhejiang province, also ordered a skull cap for his 7-month-old baby in August, when he read the advertisement on social media. In the past, she had been annoyed by the disproportionate head of her baby, which she guessed was the baby wasn’t positioned to sleep by the nurse while in the incubator.

“I had to intervene, otherwise I would be in a lot of pain every time I saw a disproportionate part of his head,” she said. Now, the woman has allowed her son to wear a hat all day. She says her only regret is not buying this product bigger, so that orthopedics would be easier.

More worryingly, Chinese parents increasingly see social media as a trusted source of medical advice. In some cases this is taking a toll on their children’s health.

Yang Yan, from Zhejiang, first saw his left hand breathe through his mouth when he was 3 years old. When taking the child to the hospital, the otolaryngologists said the child needed surgery soon when the adenoid hypertrophy had blocked more than 90% of the nasal passages. But worried about the health risks from general anesthesia, Yang refused to intervene for her daughter.

Instead, the family decided to have their daughter receive massage and rosemary therapy for three years, although she continued to breathe at night.

By the end of 2021, during a routine checkup, doctors announced that Yang’s daughter had lost part of her hearing due to damage by enlarged adenoids. She also has typical symptoms of an adenoid face. She eventually decided to have her daughter undergo surgery, but guilt over indecision persisted.

“She also has problems with concentration. I think it’s the result of not timely intervention, but now there is no way to correct the mistake,” Yang sighed.

Minh Phuong (According to Sixth Tone)