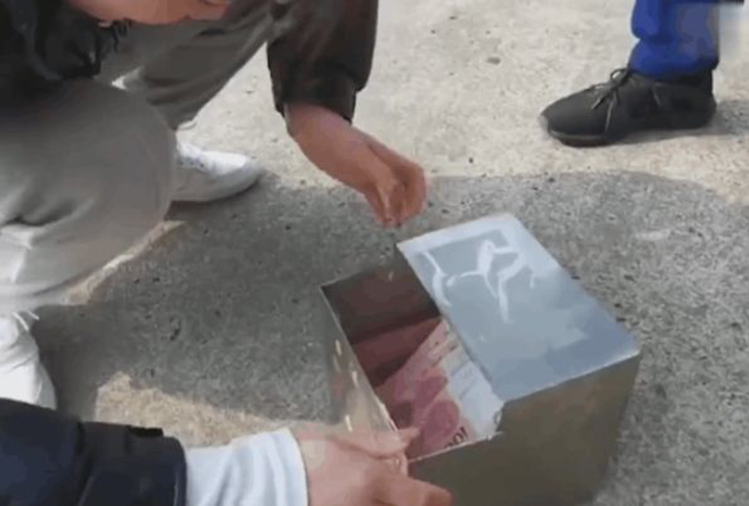 ChinaFound the iron box when cleaning the house for Tet, the wife brought it to the fire station by breaking the lock and discovered that it contained 20,000 yuan, which her husband had accumulated for many years.

The incident just happened on January 19 in Changzhou city, Jiangsu province. The woman, surnamed Lam, said that the box was hidden in a cupboard, no matter how hard she tried, she could not open it.

“I don’t know what’s inside, I don’t know who it belongs to. The appearance of a strange box made me worried so I had to ask for help,” said Ms. Lam, 30.

To open the box, firefighters had to use a saw. As soon as the lid came off, what was hidden inside surprised the wife with all the cash. She counted about 20,000 yuan (71 million dong). When questioned, the wife discovered that this was her husband’s black fund.

According to what the husband later declared, this money he had saved for a long time. Because he didn’t want his wife to know that he had his own money, he carefully hid the box in the closet, where the wife rarely paid attention.

The story, after being shared on Chinese social networks, quickly attracted the attention of Chinese internet users. Many people said that they were happy because the story was both humorous and entertaining. While others criticized the wife, because breaking the box was a private business but asked the firefighter for help. “Why should the firefighters help? Their mission is to rescue and save people, not something like this?”.

Meanwhile, a housewife commented, “This New Year, the wife has more money to buy Tet”. Another shared: “The hunches and sharp eyes of the wives are scary.”

About a year ago, another wife in China also found her husband’s black fund while taking a cotton blanket to dry.

Accordingly, a man in Anhui, China was recently awarded a Tet bonus of 30,000 yuan (more than 100 million VND). Not wanting his wife to know, he stuffed this money into a duvet.

After that, the wife cleaned the house, took the cotton blanket to dry. While the wife shook off the blanket, a rain of money with 100 yuan bills flew down the apartment block. When the husband returned home and was questioned by his wife, he was forced to confess that he intended to hide the money for personal needs.