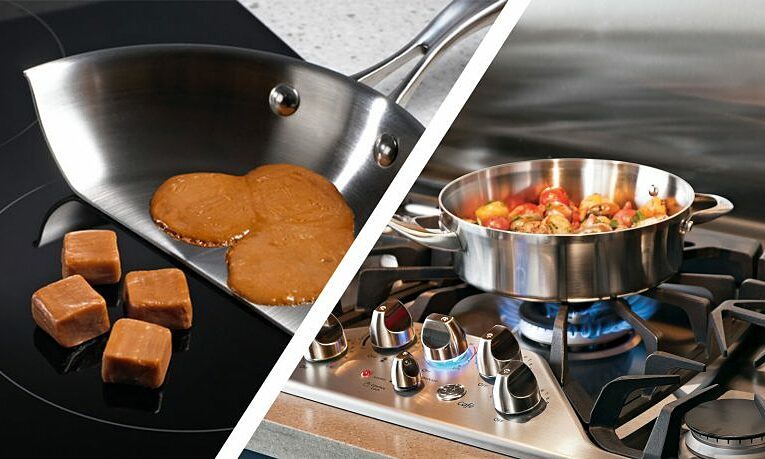 If your priority is to save money and any pot can be used, look for a gas stove.

Choosing a gas stove or an induction cooker is always a headache for many housewives.

Of the two types, gas stoves were born earlier and are more familiar to families, but many people are convinced that “modern families must use induction cookers”.

Gas stoves were developed in the early 1820s, patented in 1826 and commercialized by Smith & Phillips in 1828. Alexis Soyer, a famous London chef, converted his kitchen to use pipes. gas, which he said is cheaper and can automatically turn off when not in use. This helps more people accept gas stoves. By the early 20th century, gas stoves were widely used in America and Europe.

However, along with new technology, the induction cooker was born and gradually proved its superiority. The first patent for an induction cooktop was granted in the early 19th century. Instead of using a flame to conduct heat, an induction cooker heats the pot with an induction that is generated when an alternating current flows through a copper coil placed below the surface. a kitchen. Therefore, housewives must use pots and pans made of ferromagnetic metal, such as stainless steel or cast iron.

In addition, if you buy an induction cooker, you will need to go back to the kitchen’s electrical lines (unless using a standalone induction cooker). Induction cookers usually have a larger power consumption than conventional electric stoves. You also need to buy a series of specialized cooking tools because the induction cooker is very picky, or buy a magnetic heat-conducting base to work with copper, glass or aluminum pots and pans. Conversely, you can cook with any type of pot or pan on a gas stove.

It is undeniable that good or bad food is due to the skill of the chef, however, the kitchen is also an important contributing factor. The gas stove is good, not only because it is cheap and economical, but also because it cooks faster and is easier to control than a traditional electric stove. Gas stoves are especially suitable for high-heat dishes such as stir-frying, grilling or making steaks.

Induction cookers have an advantage in dishes that require super low temperatures, when you find it difficult to adjust the flame of the gas stove. For example, if you want to turn on a low flame to heat a sauce, an induction cooker is much better than a gas stove.

Induction hobs are safer and more convenient. Food dropped during cooking does not burn. It also does not face safety risks such as gas leaks. Finally, the induction hob is easy to clean.

Induction cookers are more expensive and the installation and operating costs are higher than gas stoves. Its glass surface can be scratched or even cracked. You have to replace your favorite set of pots and pans to cook with an induction hob while these products are not cheap. Due to the use of electricity, induction cookers are not suitable for areas with unstable power sources.

Gas stoves are more difficult to clean if food falls out, especially around the burner area. Although operating costs are low, they affect the environment in the long run.