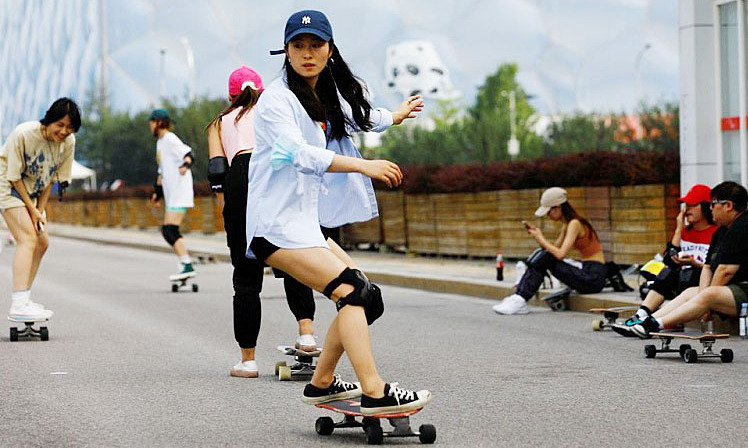 Frustrated that gyms, parks and entertainment areas were closed, Mina Zhao, from Beijing, decided to try skateboarding after seeing the trend on social media.

The 40-year-old woman was immediately intrigued. She invited her husband and children to participate in skateboarding, even introducing dozens of other female colleagues. “With my work, my life, skateboarding has a positive effect,” Zhao said, adding that it helped her lose weight and worry less about her children’s studies.

Clubs and groups of these subjects flourished in China. According to professional dancer Duo Lan, the weekly free class for women in Beijing that opened in late April has grown from 10 people to nearly 100.

Skateboarding search results skyrocketed in China. Xiaohongshu, a shopping and lifestyle recommendation app, said the cluster of “land skis” grew 50 times in June, compared with a year ago.

In one year, sales at the Beijing branch of the Burning Ice skateboard shop increased about 300%. In which, women make up 70% of sales.

In addition to stress relief, skateboarding makes Zhao feel fulfilled and full of positive energy. It prompted her to step outside, wear more colorful clothes, and dye her hair a light color for the first time. “Through this sport, I want to discover more about myself,” the woman said.

Some said the sport became a hobby, as Covid-19 made summer travel difficult.

Chen Yanni, 29, also tried windsurfing after seeing it on social media. “It’s so liberating. I’m almost 30 but I feel so young. It’s like being a teenager,” said the girl who works in the IT field.

“I feel like I’m back at the beach,” said Yoyo, 34, a financial expert, diving instructor and part-time surfer. is to feel free”.