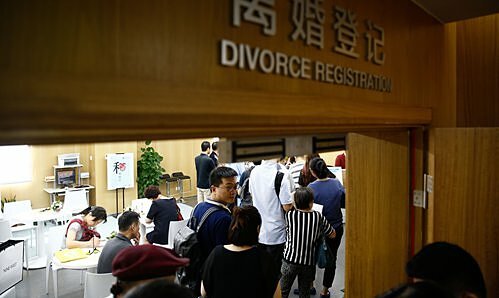 Under the new rules, couples who want a divorce must spend 30 days “cool down”, to review their relationship and have to file for a second divorce.

China’s divorce attorneys say they have received numerous requests from couples who filed for the first time after the 30-day deadline. In some cities such as Guangzhou, Guangdong province, the need to consult with divorce attorneys is so high that the agencies use an additional form of high-priced online assistance to help couples.

Zhong Wen, a divorce lawyer in Sichuan province, said he received a lot of phone calls from clients – most of all expressed concern that the new law would complicate their divorce proceedings and photos enjoy the right of husband and wife to break up freely. This new law states that, if one party withdraws from the divorce agreement 30 days before, the petition will be canceled, the other must reapply and start waiting another 30 days, or initiate a divorce lawsuit – one too. submission is very expensive and takes a long time.

Even before the “30 days cool down” law was introduced, the lawyer said, there were quite a few cases of “one party changed its mind”. Now, with the new law, the divorce process will be more complicated.

When the law was passed by the Chinese parliament last May, many people said the government was too deeply involved in privacy matters. More than 600 million comments online with the hashtag “oppose the 30-day cooling-off period” (oppose divorce cooling-off period). The incident also made a lot of noise on social media, when many Internet users asked the question: Are Chinese people no longer having the right to free divorce?

Meanwhile, the Chinese authorities believe the law will reduce the divorce rate in China, which is growing rapidly, while also preventing “impulsive divorces” among young people.

China’s divorce rate spiked, especially during the blockade period to prevent Covid-19 from spreading. In 2019, 4.7 million couples divorced, compared with 1.3 million in 2003.

Ran Keping – professor of law at Wuhan University – said: “Although divorce is the freedom of each individual, but the high divorce rate will affect the stability of the country”.

In particular, the new law does not allow unilateral divorce on the grounds of “being a victim of domestic violence”. Lawyer Zhong said the law would be detrimental to women, especially those without an independent source of income. “If a woman wants and the man does not want a divorce, the woman will have to file a lawsuit, hiring a lawyer at no small cost. Many women – especially those who are only housewives – do not. he has the financial capacity to do this, “Zhong said.

Zhong suggested that couples can avoid delays in the divorce settlement by applying for mediation instead of filing for divorce. In mediation, if the two parties reach a divorce agreement, the court will issue a document with the same validity as the divorce decision.

The right of Chinese citizens to marry and divorce has long been a matter of public debate. December 2020 – a few weeks before the new law goes into effect, a woman in Shaanxi province filed for divorce due to “being beaten by her husband for 40 years”. However, the judge refused to allow the divorce and said the couple have been together for 40 years, thus “they will need each other in their final years”. The judge said that the wife should cherish her hard-earned happiness in the years to come.