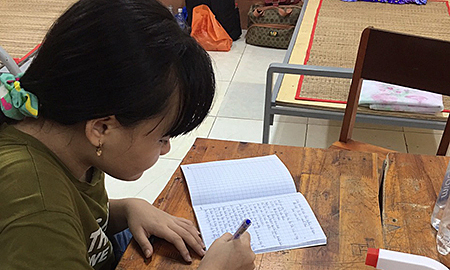 For the past five months, Mrs. Nguyen Thi Huong, 61 years old, has also added the role of mother to her two grandchildren, lulling them to sleep every night and ready to be present whenever they are startled and scared.

Covid-19 has poured three consecutive mourning into the small family of two children. Their father died in the hospital at the end of July. Six hours later, the mother died at another hospital in Ho Chi Minh City. Five days later, grandfather also passed away in the isolation ward. The world of Tran Khanh Nhu, 13, and Tran Dang Huy, 6, changed since then.

As the only remaining relatives of Nhu and Huy, Mrs. Huong and her husband had to pick up their children from District 8, Ho Chi Minh City to their hometown in Trung Tam hamlet, Thanh Binh commune, Trang Bom district, Dong Nai province. Although she has given up fishing for a few years, since raising more grandchildren, now her husband wakes up early to prepare tools for sailing to the Dong Nai River, earning hundreds of thousands of dollars a day to maintain his life.

Nhu and Huy are not an isolated case when they left their home to live in a strange place, due to Covid-19. At the Vietnam Economic Forum 2021, the Institute of Labor and Social Sciences released data that as of December 5, the pandemic had left more than 2,500 children orphaned, including nearly 100 orphans with both parents. both mother. Not only losing loved ones, many children also lost their familiar home, moved to live with relatives in a completely unfamiliar place.

“The fourth wave of Covid-19 has caused many children to fall into a cruel spiral with no support left,” said education doctor Nguyen Thi Thu Huyen, program director, educational organization Teach For Vietnam. .

With no support left, this month, 11-year-old Tran Thi Tuyet Ngan has learned to live alone in a corrugated iron house in Tang Thanh A hamlet, ward 2, town 5, Soc Trang. My mother died of Covid-19 and my father passed away from an electric shock 6 years ago.

Even before her mother passed away, Ngan’s family was always in the poorest household in the commune. After the death of his father, his brother, Trinh Van Nhan, had just finished grade 8 and had to drop out of school to go to Ho Chi Minh City to sell hired fruits at the Thu Duc wholesale market. A year later, her mother also took Ngan to the city to work as a porter. Both parents and children live in a 15 m2 motel near work.

In August 2021, Ngan’s mother was infected and died at a field hospital after seven days of treatment. Receiving the ashes of their mother, the two brothers took each other back to their hometown. After building a grave for his mother, Ngan’s brother received a phone call from the owner of the shop, asking to go back to work. Because of the working time from 6pm the previous day to 6am the next morning, he could not pick up and take care of him, so Trinh Van Nhan sent Ngan to his next-door uncle to “take care of it”.

On the day of his departure, the 21-year-old had to hide in the middle of the night for fear that he would wake up and could not walk. In the text message sent back, Nhan wrote: “The child at home tries to study well. I go to earn money, my father’s death anniversary will be back in a month”.

In July, Medical Journal The Lancet published research on the secondary effects of the pandemic. “Covid-19 out of control has dramatically and permanently changed the lives of orphans,” the study states. At the same time they “will grow up with a profound loss because of what they’ve been through”.

La Linh Nga, Director of the Center for Research and Application of Psychological Science in Education (PPRAC), said that children who suddenly lose a loved one will experience negative psychological problems such as sadness, despair, and irritability. or paralysis, lasting several weeks, others may experience longer-lasting effects.

When Huy woke up crying in the middle of the night, Mrs. Huong often patted him: “Go to sleep, parents will come back tomorrow”. To this day, she still has not dared to tell the truth to her 6-year-old grandchild. Half a month ago when the epidemic subsided, Mrs. Huong took a car to Ho Chi Minh City to collect the belongings of her two children in the rented room. When the car arrived home, seeing his parents’ things, Huy hugged him and sobbed, blaming: “If you bring all the clothes back, what will your parents wear?” As for Nhu, at the age of 13, she knew how to hide all her emotions from her grandparents. Every night, he would sit alone in his room, holding pictures of his parents, crying his pillow before going to sleep.

Since the day he left, Ngan has lived and studied online in her parents’ house. When it was time to eat and sleep, the little girl came to his house. Being quiet, having to live alone in a house of 30 square meters, she became more and more taciturn.

You are in one place, I am in another, whenever you have free time, Nhan calls home. At first, I often cried and blamed him for not bringing him to Saigon because he missed the hostel, missed the meal full of members. “Waiting for the job, I will pick you up”, Nhan promised me. Currently, he has just applied to work overtime at the store, hoping to increase his income. “For my sister, I have to try,” Nhan said.

According to Dr. Nguyen Thi Thu Huyen, the loss of a loved one and then suddenly moving to a new place will cause children to be severely shocked by the loss. Therefore, limiting changes in daily habits can help children somewhat.

“Relatives can talk to the child to know the daily routines of the family before.” According to Ms. Huyen, godparents should discuss with the child to rearrange some activities and habits, what does not need to be changed can be kept the same.

Family gathering events such as holidays and Tet can make children feel lonely, lonely and miss their deceased parents. During the first two years, loved ones need to be around the child more during these occasions and keep the child busy with the same routines.

According to Huyen, having a frank conversation about a parent’s death in a calm state helps children more than avoiding or lying to the child. The adults around can remind them of good things about their parents and encourage them to pray together that good things will always come to their parents in the other world.

Now, if she sees me crying, little Khanh Nhu no longer turns her face away but runs to comfort her. As usual, he pointed to the sky, telling Huy his parents were like stars, watching over the two sisters. “When you grow up, you don’t cry. Study well, help grandparents with housework, parents are happy”.

“Listening to her, my eyes sting,” Huong said. She understands, although the future is still difficult, but as long as the children are healthy, the family still has each other. “Now I need to appreciate what’s around me,” she said.

OLDThe New Year of Hope program of the Hope Fund – VnExpress newspaper is expected to give 1,500 gifts with the desire to share the loss with orphaned children because of Covid-19. Interested readers and businesses can support the program here.