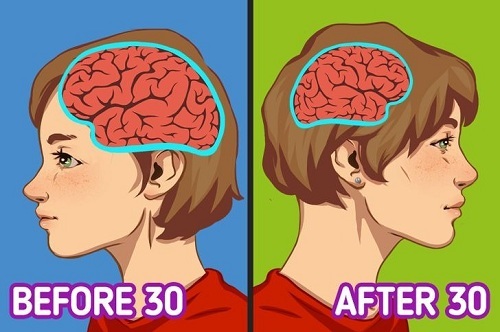 An article on the medical academic system of the University of California (USA) said that when people reach the age of 30, some areas of the brain shrink, especially the prefrontal cortex and the hippocampus (partially of the brain located in the temporal lobe) – areas important for learning, memory, planning, and complex mental activities.

It is estimated that the brain loses 50,000 nerve cells per day after age 30. But the human brain contains an average of more than 100 billion neurons, and research shows that the brain ages while learning to adapt better.

Women have varying degrees of perspiration with age. The sweat glands (mostly under the arms) also shrink with age, reducing sweat production.

Similarly, sneezing and coughing are less common as we get older. When you get into middle age, you get more illnesses and so your immune response develops.

The taste buds may fade with age and you may lose interest in eating and drinking. Most people lose some of their taste buds, according to information from the US National Institutes of Health. That is why the elderly often eat foods high in sugar and salt. Smell also encountered a similar scene.

One of the most pronounced effects of aging is a drop in weight, leading to weaker health. According to studies published in Pubmed (the National Library of America), from the age of 30 on, every 10 years, muscle mass decreases by 3–8%. This decline rate is even higher after age 60.

If you go through your adolescence in a very emotional state and by the age of 20 you try to prove something to the world, then after age 30 you will be calmer. Professor Paul Costa of Duke University Medical Center, USA, said, stable personality age is from 30 to 50 years old.

According to the publication in JAMA Medical publications, the researchers found that when we are young, nails will grow very quickly. Dr. William Bean, said, his nails grow at a rate of 0.123 mm per day. After age 67, this ratio drops to 0.095 mm. These changes can be caused by slower circulation of blood.

Teeth are less sensitive just because you could fall out. Over time, more and more dentin (hard inner tissue – formed between the enamel layer on the outside of the tooth and the central nerve) leads to a decrease in sensitivity. Plus, over time, our gums will become more receding, exposing the roots.

When you were a child, you often felt satisfied with life. After that, this feeling lessens, even, in a period you fall into a state of crisis.

According to common belief, the elderly will decline physically and psychologically. However, a research result is above American Journal of Psychiatry (2012) that as we get older, we can feel happier and more satisfied. Less depression and optimism.

Intelligent Update (According to the Brightside)