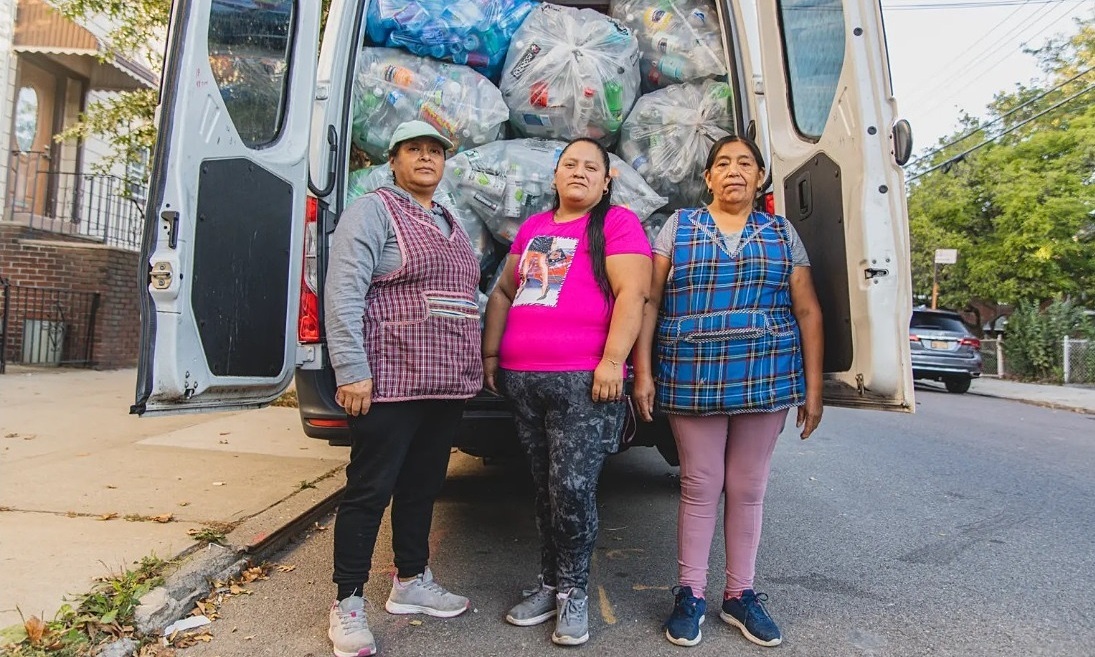 AmericaBags full of empty cans and bottles thrown away to passers-by are garbage, but for Pilatacsi, it’s money.

“Fifteen years ago, my father lost his job. My family didn’t know where to find the money to rent. He took the cart out and started picking up cans. Now he’s retired and we’re taking over.” Jeanett Pilatacsi, 38, of Queen, New York, said.

Each bag on the corner of Riverside Drive and West 89th Street contains about 200 drink containers, each worth 5 cents (1,000 dong), if brought in to exchange at the Elmsford recycling center, New York.

At first, Pilatacsi’s father picked up only 30 bottles of the drink a week. Now, on the most favorable days, family members collect up to 100 bags, or $1,000.

All 12 members of Pilatacsi’s group are related and live together in a house in Rego Park. Ms. Jeanett Pilatacsi said profits from scrap collection pay all their bills. When they’re not working, they dine together, help raise their children, and share in the thousands of dollars they make each week.

The children in the family sometimes help to collect the boxes when they are not in school. Pilatacsi’s grandson, 11, plans to attend college, still supporting the family during the summer days.

Pilatacsi sees his family’s work as a business, where the value of building relationships with store keepers and porters can be learned. ”Sometimes people say we’re scavenging but I don’t care. We know what we’re doing,” the woman said.

While the rich in New York are indifferent to collectors, transporting recyclables through posh neighborhoods, Jeanett Pilatacsi sees it as a profession that brings self-respect and pays well.

Previously, she also worked in a candle factory, had to work long hours but little money. “Now, my family and I work from noon to 8 pm, collecting until the truck is full. A day collects more than 600 USD,” she said.

The Pilatacsi family is not the only group in the business of picking up scrap. An estimated 8,000-10,000 New Yorkers make money by collecting cans, bottles and plastic containers, according to Ryan Castalia, executive director of the nonprofit redemption center Sure We Can. Among them, about 100 consider this as their main livelihood.

Mr. Ray del Carmen, who lives in Brooklyn, now works as a manager at Sure We Can, also used to work as a bottle cutter, said that the workers always know well when they will pick up a lot of scrap, especially on big holidays. .

While he doesn’t pick up scraps full-time like he used to, he still helps his girlfriend, who makes a living by helping her with her biggest holiday. “St Patrick’s Day is the best day. People start drinking early. So from 2pm to 4am, going from bar to bar, between 42nd and 45th streets, I made 800 USD,” he said.

For Mario Palonci, 70, a Czech immigrant, picking up trash became an outlet. “I drink 20 or 30 cans of beer a day,” he says. The man who now lives in a shelter in Brooklyn makes up for his financial shortfall by picking up 2,000 cans a night.

“I spend the whole morning sorting plastic, sorting it, putting it in the right bags. It’s hard work, but it’s the best job for me,” he said.

In addition to money, Palonci says his work earns him respect.

Garbage collection with Josefa Marin, a Mexican immigrant, is a profession that provides a good future for her and her mother. In the early 2000s, her daughter went to college, so she struggled to make ends meet with a series of low-paying jobs. Unemployed, Marin turned to picking up cans to pay for books, meals and travel expenses for her children.

In 2011, she ran into a man named Pedro Romero, a fellow countryman from Puebla. He is also struggling with his new life.

They recognize each other, fall in love, and work together to pick up scrap around the clock, sleeping when possible, usually in a scrap truck.