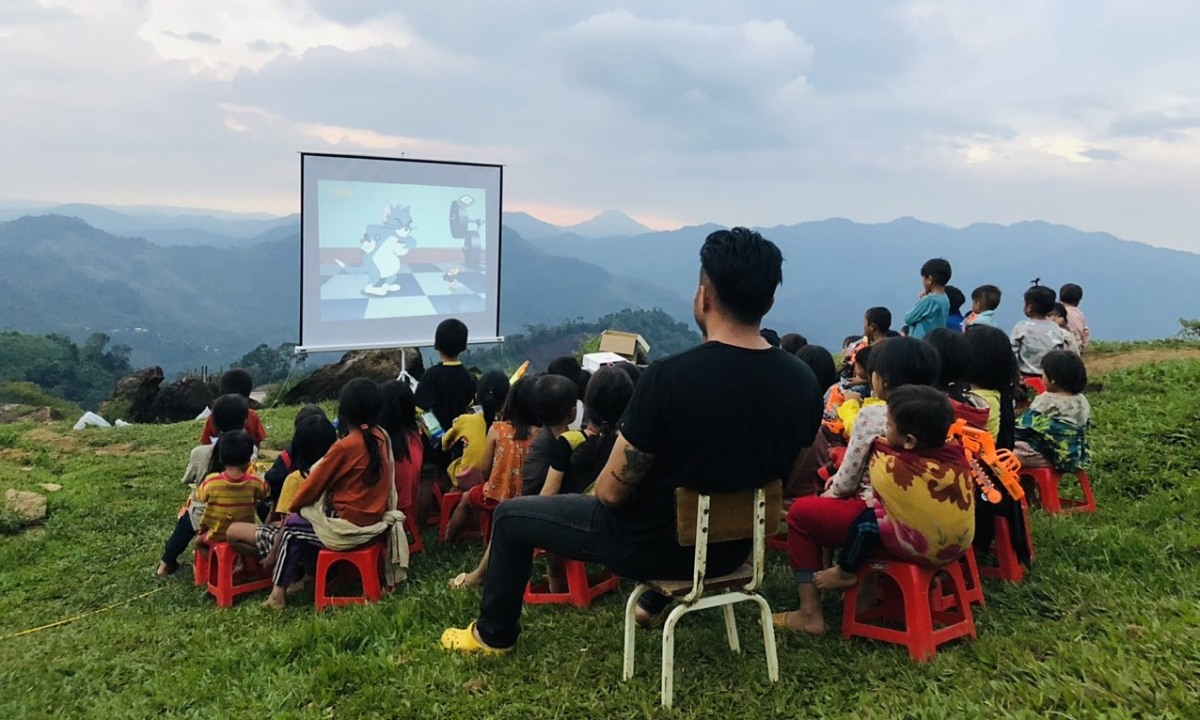 DanangWhen the 120-inch projection screen lit up with the opening scene of the cartoon, the children of Tak Po school cheered, and Ho Hoang Liem smiled with satisfaction.

This is the third movie theater on the mountain, Liem (33 years old) and his associates deployed it so that nearly 100 children of Tra Tap Primary School and Phong Lan Kindergarten “knew animated movies for the first time.” What’s the picture?”

To organize each cinema like this, Liem’s ​​group had to carry equipment, projectors and screens over hundreds of kilometers from Da Nang to Tra Tap commune, Nam Tra My district, Quang Nam province. The road is dangerous, there are places where vehicles can’t get in, people have to carry equipment to cross the mountain.

The idea of ​​setting up a mobile movie station appeared two years ago, when Liem caught the bewildered eyes of highland children seeing the sea for the first time, seeing cars on the road in his phone. The question “What is this?” of a young boy pointing at a tall building made him decide to act.

“The cinema is something very far away in the minds of high school students, because they only know about the buffalo, the chicken, the mountain, the stream where they live. I want to bring technology to the mountain, help them have a special childhood,” Liem said.

Looking at the eager faces of students when they first saw the cartoon teacher Tra Thi Thu, the teacher at Tak Po school couldn’t help but be moved. “Up until now, children had to imagine the world through their teachers’ stories, but now they can see it with their own eyes. In addition to entertainment, projectors are also a modern teaching tool, helping us to have more visual lectures about the world, attracting children to school instead of going from house to house,” said Ms.

There used to be a charity group to help build schools, sponsored food and school supplies for students, but the female teacher said that Liem’s ​​group is very special when it comes to the spiritual life of children and relatives. .

“Not only brought the cinema to the mountain, the group also gave the children kites, toy cars, and teddy bears, making the children call him “the toy god.” From students to relatives, everyone love and appreciate the group”, the female teacher confided.

Ho Hoang Liem was born into a poor family in Da Nang. From a young age, he and his friends in the neighborhood stood in line from noon to afternoon to receive food and toys from charity groups. “Every time I receive gifts, my brothers and sisters are very excited. Then I wish when I grow up, I will be like the uncles and aunts who bring joy to others,” he said.

In college, Liem joined volunteer groups. During a trip to give gifts to relatives in Dai Son commune, Dai Loc district (Quang Nam), organized by the university in 2009, seeing the flood and hardship of the people, what did the second-year student want to do? that means. Back home, he invited a few close friends to set up Da Nang Pink Smile Club, hoping to help unfortunate lives and poor students in the city to remote areas of Quang Nam such as Tay Giang. , Nam Tra My.

Initially, there was no strong support, the group of students went to sell candy, sell flowers, ask for each can of rice, organize street music nights to raise funds. After 5 years of operation, in addition to deducting salaries for charity, many sponsors offered to support, Liem’s ​​group began to find schools in remote and remote areas to install solar power, water purifiers, and yards. play for children.

“The more I go, the more I see that there are many places on the S-shaped strip of land that don’t have electricity, clean water or access to advanced technology. I want to help them change their lives,” he said.

In 2016, Liem and 13 members of the club took turns carrying 4 solar panels weighing more than 100 kg, crossing four mountains in 10 hours to village 5, Tra Don commune, Nam Tra My district. “Mountain climbing and forest make people tired and exhausted, limbs are scratched, covered with mud, sweat is like a bath, but knowing that relatives are waiting, we encourage each other to continue,” he recalled. .

After a few hours of installation, the first electric light from the light bulb turned on at dusk, making the people of Village 5 and the charity group happy, hugging each other and crying. “In previous years in the commune, there were many residential areas without electricity and lack of places to play. Thanks to Mr. Liem’s ​​group, we don’t have to use kerosene lamps or candles to avoid the dark night,” said Mr. Ho Van. Ven, Secretary of the Party Committee of Tra Don Commune, said. Up to now, the solar panels are working well, ensuring enough lighting for the villagers.

Along with the “carrying” of electricity, carrying the cinema to the village, thanks to the trust of domestic and foreign sponsors, the club also organizes surgery programs for children with cleft lips, cleft palate; to help children and families with difficult circumstances go to school; support orphanages; organized a 0-dong market, bringing food to difficult families when Da Nang broke out…

Mr. Liem said that he and the group did not receive donations. All costs of surgery, program organization are invoiced and sent directly to the sponsors for disbursement, avoiding the noise.

On average, the 33-year-old man organizes 2-3 humanitarian programs per week, but still has to balance with his main job. “I am fortunate to have the support of my family and superiors, enabling me to do charity work, but I also clearly define public and private affairs, avoiding affecting work performance,” he said.

During 12 years of volunteering, always being in difficult areas, so many times Liem fell into dangerous situations such as nearly drowning in the historic flood in the Central region in 2020 or lucky to escape a landslide in Vietnam. Nam Tra My 2019.

“Is it too dangerous? Or should I stop,” Liem’s ​​wife expressed concern when she heard that her husband had just escaped death. Understanding the family’s worries, but he still did it because he knew there were still many difficult lives in need of help.

“I don’t mind going far, working hard, just afraid of not being able to help all those in need. When there are no more offers of support, there is electricity and water in the most difficult places, 100% of children have access to knowledge. , only then did I allow myself to rest,” he said.

After completing three mobile cinemas, next September, Mr. Liem plans to set up one more theater in the northern mountainous region. In addition, the 33-year-old man wants to install more power stations using solar panels, set up many classes on applying modern technology in disadvantaged areas, so that people and children can have a better life. .