(Sports news – tennis news) Could the Australian Open 2022 be the start for the new “BIG 4” group to dominate tennis?

The Australian Open 2022 tennis tournament will be played from January 17 to January 30. This is the first Grand Slam tournament of the year and will be the convergence of the top names. Besides the top names expected to appear like Rafael Nadal, this year’s Australian Open will still be a stage for a series of next generation players (Next Gen group) to showcase their talents and show their ambition to conquer. . Without the defending champion Djokovic, Nadal will try to defend the honor of the “Big 3” at the Australian Open 2022?

* Medvedev challenges the dominance of “BIG 3”

The most prominent among the young players attending the Australian Open will be world No. 2 Daniil Medvedev. The star born in 1996 is a real counterpart to the “BIG 3” group, the 25-year-old tennis player has won 4 singles titles of the ATP Tour system in 2021, including the US Open championship. 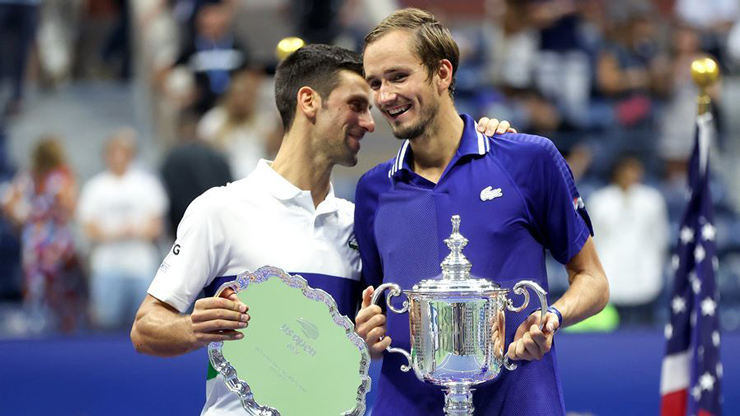 Medvedev is threatening the dominance of “BIG 3”

The Russian tennis player is the reigning runner-up of the Australian Open, losing to Djokovic in the final last year. However, Medvedev was able to “revenge” Nole when he won the US Open final the same year. Compared to the rest of the players, Medvedev has entered the ranks of big names and is no longer a promising talent, but of course he wants more titles to be more than just a passing phenomenon.

At the upcoming Australian Open, according to the announced draw results, the Russian tennis player will be ranked 2nd seed. His path to the final is expected to meet Laaksonen in the 1st round, Nick Kyrgios in the 2nd round, Humbert in the 3rd round, Diego Schwartzman in the fourth round, Andrey Rublev in the quarterfinals, Stefanos Tsitsipas in the semifinals, and according to the original scenario, Medvedev was expected to meet Novak Djokovic in the final.

This is a relatively favorable draw and the real challenge for Medvedev will probably only come in the quarterfinals.

Right behind Medvedev on the ATP rankings is Alexander Zverev. The player born in 1997 is entering the maturity of his career and has just finished 2021 perfectly when he defeated Daniil Medvedev in the final to take the throne at the ATP Finals. Before that, Zverev also won a gold medal at the Tokyo Olympics, defeating Novak Djokovic himself in the semi-finals in a losing position. According to the Australian Open branching results, Zverev is seeded at number 3. The German star is expected to face Altmaier in the first round, John Millman in the second round, Harris in the third round, Denis Shapovalov in the fourth round, and Rafael Nadal in the quarterfinals… is really not an easy branch for a 24-year-old player.

Another name that is considered capable of bringing down the “Big 3″ is Stefanos Tsitsipas. The Greek tennis star has just returned from an elbow injury and is eager to win the first Grand Slam title of his career, he in an interview also expressed curiosity about a world of tennis when the group ” BIG 3″ is no longer playing. Last year Tsitsipas won the Monte Carlo championship and was named in the final of Roland Garros, but he lost to Novak Djokovic after 5 breathtaking sets. The Australian Open is a tournament where the number 4 player in the world has twice reached the semi-finals. but they all fell to Djokovic and Medvedev.

At this year’s Australian Open, Tsitsipas has a “breathable” branch when he only has to meet Ymer in the first round, is expected to face Romas-Vinolas in the second round, Dimitrov in the third round, Bautista Agut in the fourth round, Casper Ruud in the quarterfinals, Daniil Medvedev semifinal….

Meanwhile, world number 5 player Andrey Rublev will be an interesting unknown when he has just tested positive for Covid-19 and missed the final event in 2021, the ATP Cup. Therefore, the Australian Open will be the tournament where Rublev marks the return to the best form. The Russian star is not as prominent as fellow tennis player Medvedev, but has a fairly comprehensive style of play. Therefore, Rublev promises to cause many difficulties for the top names on the way to the championship. The player born in 1997 has just had a memorable season, but at the age of 24 hours is the time when fans are waiting for him to truly develop into a top player with a big title to come.

Medvedev, Zverev, Tsitsipas and Rublev, the growth of these four players over the past few years makes them now considered top contenders for the “BIG 3”. If this quartet begins its dominance in world tennis from the Australian Open 2022, we can say a “BIG 4” group is forming to replace the senior “BIG 3”.

The “BIG 3” group is entering the twilight of their career, but although Novak Djokovic (about to be expelled) cannot compete, Rafael Nadal is still there to challenge the youth. Please read the next article about Nadal’s championship chances on the morning of January 16, 2022.