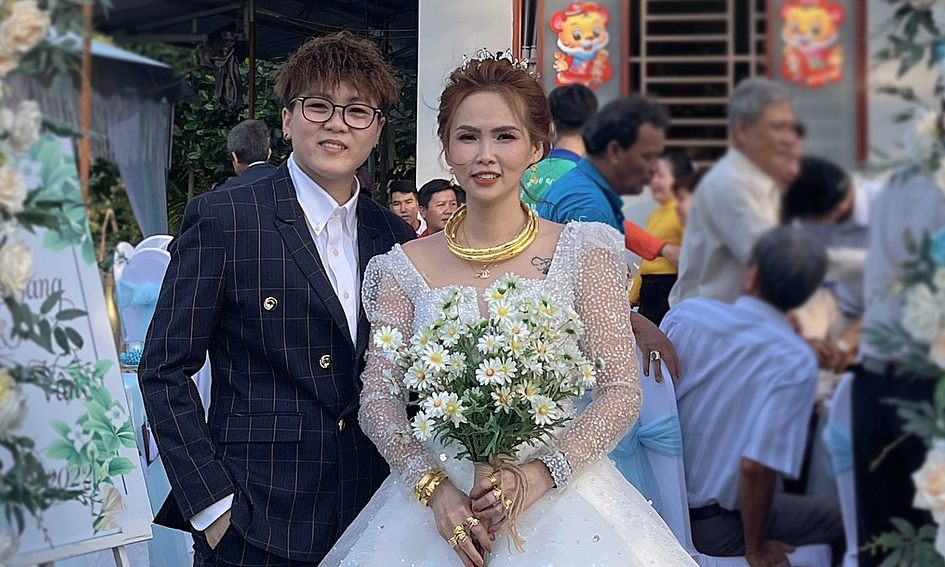 Ho Chi Minh CitySeven years ago, Tran Bang married a Japanese man and spent three years in a deadlocked marriage because deep down, she only liked women.

In February this year, Tran Bang, 32 years old, turned to a new page in his life: Getting married in his hometown of Vinh Long with the girl he loved. This time, Bang is the groom to pick up the bride.

“I have not been honest with myself over the years because I don’t want my parents to be sad, people will criticize me. At this moment, I want to be myself,” Bang told friends present at the wedding school.

They distributed invitations to relatives throughout Ho Chi Minh City, Vinh Long, Nha Trang, but asked guests not to give gifts. Tran Bang just wants to be blessed and prove that gay people want a home just like everyone else. For ordinary people, love is inherently difficult to find, for the Bang couple, it is even more difficult.

Before the wedding day, Bang took his wife Tuyet Van (38 years old, from Nha Trang) to the dress shop, personally chose the most beautiful dress for her, and together selected hand-held flowers, decorative flowers, bed sheets, and bought furniture.. She eagerly blew the balloons to decorate the wedding room and then rearranged the altar with her parents. “Every little thing I find very sacred, far from the first wedding ceremony,” she said.

Tran Bang shared, she began to realize that she only had feelings for girls since the 11th grade. However, she still kept her true self hidden because she did not want to meet the expectations of her adoptive parents. At the age of 25, Bang decided to marry a Japanese man. Looking at her fiancé’s way of walking, posture and friends, the foreign man knows she is not feminine but thinks his steadfast love will change his life partner.

On the wedding day, Tran Bang prepared everything like an unconscious person. Dresses and tables are all ordered by phone. The theater is up to your friends to help you arrange it. “I got on the flower car literally with my eyes closed,” recalled Bang. After returning to her husband’s house in Japan for two weeks, Bang moved out and announced that she would be independent. However, her husband still cares and supports her wholeheartedly.

They sometimes meet, but the wife has no feelings when she is close to her husband. From the place of wanting to avoid, Bang was disgusted and panicked when she saw her husband. Three years later, the Vietnamese wife proposed a divorce. Since then, Bang has cut his hair short, dressed in men’s clothes and identified himself as a man.

In a sleepless night, Bang saw a friend named Tuyet Van still online. They have been friends on social media for many years, but have never spoken. That day, for the first time, a foreigner asked to visit a Nha Trang girl. Tuyet Van confided that she was depressed because of love affairs. She said she was married to an American man. Due to the nature of her job, her husband comes home once a month and is cold to his wife. “I divorced after two years away from home because my husband was unfaithful,” Van told Bang.

Empathetic, they talk until morning and repeat that routine every day. “Relationships started online are virtual, but the vibrations are real. My heart dances, not soulless,” said Bang. The daily calls and messages of new acquaintances also warm Tuyet Van’s soul.

The girl was surprised when even though she was in Japan, sometimes she ordered flowers for her girlfriend in Nha Trang. Unable to return home due to Covid-19, on her lover’s birthday, Bang called to ask her close friend to order cakes and gifts and bring them to Van’s house. “But what touched me the most was that he was still steadfast in our love, even though it was full of obstacles,” Tuyet Van said.

Hearing Bang say divorce her husband to come with a girl, Mr and Mrs. Tran Quang Ut, 66 years old, objected. Grandparents do not believe that giving up a foreign husband in exchange for gay love online can make their children happy. For a year straight, grandparents and their only child could not find a common voice.

“If I can’t be with the person I love, I don’t want this life anymore,” she said and promised to cultivate a perfect marriage. Listening to his son’s gut-wrenching words, Mr. Ut accepted. “Instead of losing my only child, I have another one,” he encouraged his wife, as well as himself.

At the end of 2021, when international flights reopened, Tran Bang returned home to meet his girlfriend for the first time. “Holding the hand of the one I love makes my chest feel like it’s about to burst with joy. Even though outsiders look at me and point, I’m full of joy and confidence,” she confided.

Tran Bang shared capital to open two restaurants in Ho Chi Minh City, sell goods online, and subcontract apartments for rent. She went to her girlfriend’s house to ask for permission, took her to Ho Chi Minh City to work, and built a home for the two of them. “He is romantic, brave and always a support for his wife, for his elderly parents, like any real man,” the wife said.

The wedding was held earlier this year, Tran Bang and Tuyet Van were blessed by their parents, friends… On stage with only two people, the groom holds the bride’s hand, always smiling. “This is the most fulfilling moment of my life,” said Bang.

After more than four months of living in the same house, Tran Bang and Tuyet Van are planning to have a child, which is the crystallization of love and desire for a real home.