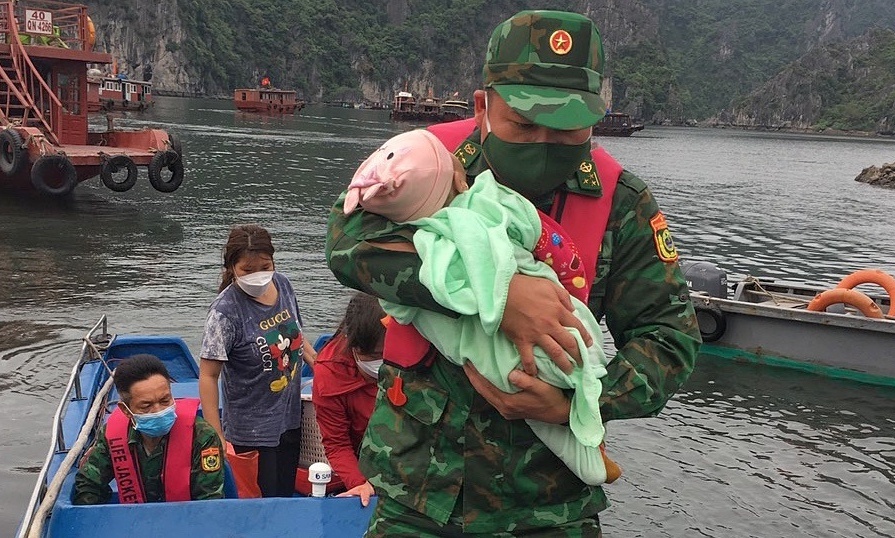 Quang NinhSeeing the cries of children falling into the sea, Captain Hoan and Lieutenant Colonel Toan quickly got on the boat and ran to search and rescue, on the morning of April 28.

The person calling for help is Mr. Ha Van Nam, who is fishing in the waters of Ha Mai, Van Don district. His daughter, Ha Minh Dan, one year old, slipped and fell from the family’s fishing boat in the middle of the sea, about 700 meters from Ha Mai Border Guard Station, Ngoc Vung Border Guard Station.

After arriving at the scene, Captain Vu Duc Hoan and lieutenant colonel Nguyen Trong Toan searched the surrounding area and discovered and picked up Dan’s nephew on a motorboat and brought him to the station.

After more than 20 minutes of continuous breathing, breathing, breathing pressure, by 7:25, Dan showed signs of regaining consciousness. The unit arranged a motorboat, sent 4 officers and soldiers to take the victim and his family to Cam Pha City General Hospital for further emergency and treatment.

According to Lieutenant Colonel Han, there were 5 people on the boat at the time of the incident, all of whom were family members. My family lives in Van Ninh commune, Mong Cai city. The baby fell into the sea possibly due to carelessness of the family.

Currently, the baby’s health is stable.

This is not the first time Ngoc Vung Border Guard Station has saved people. According to Lieutenant Colonel Han, every year there are still occasional cases of children falling into the sea, if detected in time, saving lives is not difficult.

“We always warn families with fishing boats to keep an eye on their children to avoid unfortunate situations,” said Mr. Han.