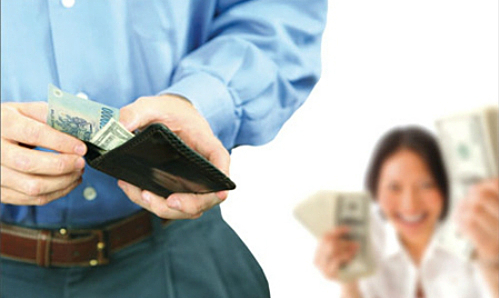 Hong Anh didn’t know that her husband sent her sister 5 million dong every month during her university years, until she graduated and posted a thank you post.

Minh Hung, her husband, is an IT engineer, earning more than 30 million VND a month. The entire salary he paid to his wife as agreed before the marriage. However, Hung secretly kept his part-time job, bonus, monthly sending to his sister to attend college and pocket money for himself.

I think helping you will reduce the burden on elderly parents, is a way of filial piety. Hung also does not let this affect the family’s finances. He didn’t want to say it because he knew his wife didn’t fit in with his family, and he didn’t say she was comfortable.

Hong Anh knows that her husband still has a black fund, but thinks he also needs his own space, so she doesn’t manage it. But the day I read the article of her brother-in-law, a 37-year-old woman in Dong Da, Hanoi suddenly became angry. “You consider me a scarecrow? How many other types of black funds do you have?”, she shouted. Minh Hung, her husband, apologized to appease his wife even though he felt he was not wrong.

“Giving money to my sister without saying it’s disrespectful to me. That really hurt me and lost faith in my husband,” she said.

Sharing feelings with Hong Anh, more than a quarter of couples consider “black funds” to be unfaithful behavior, worse than physical betrayal, according to a survey by financial services CreditCards (USA). year 2021.

Psychology Master Phong Nguyen (Hanoi) said that the “black fund” that Hong Anh talked about is actually a fear. “We are afraid that our partner is not honest, we do not want to be with us, but we are building a backup plan, an underground resource,” Phong said.

According to Dr. Nguyen Thi Minh, Lecturer in Psychology and Soft Skills, Sub-Institute of the National Academy of Public Administration in Ho Chi Minh City, in terms of finances, a perfect marriage is when there are no secrets between the two. However, if the spouse has a separate account that is not too large and does not affect the family’s finances, it is still acceptable. “Everyone has a privacy that needs to be respected, as long as it doesn’t cause harm,” Minh said.

According to experts, many people often equate “black funds” with “private funds”, leading to unnecessary conflicts. Ms. Minh said that Hung’s own money does not harm the family, but also helps parents, unites people, deserves praise rather than criticism.

In a survey by VnExpress with more than 500 readers, 46% said that husband and wife should have a black fund; 40% choose the husband and wife solution, so they agree to contribute to the common fund, the rest, someone’s money, and 14% think that family finances need to be focused on one relationship.

According to psychologist Nguyen Thi Tam (HCMC), according to a common concept, a black fund is an amount of money that a spouse keeps separately without his or her partner knowing. But even though the amount that Hung provides for his sister is called a black fund or a private fund, Ms. Hong Anh should not be angry.

“Black fund is not bad. Bad or not depends on the purpose of using it”, Ms. Tam said.

Because he believes that the purpose of using his wife’s black fund is not bad, Minh Duc (32 years old, in Ha Dong, Hanoi) is very comfortable. Two days ago, Ms. Nguyen Thi Ngan had just lamented that she ran out of money when she received a message from the bank informing that the interest and principal would be returned after saving more than 50 million dong. Incidentally, her husband was holding the phone to watch a movie together, so he could read it.

“There’s a black fund in your mouth,” Hoang Duc told his children in a panic. Ngan blushed, took the phone back, said “everyone has a plan”, then ran into the room. Duc looked at him and smiled. “I guess the wife has a lot of private accounts to hide from her husband, but leave her alone,” said the owner of a grocery store.

Duc and Ngan came together empty-handed, now have two children. On the first days of giving birth, only he went to work. “Delicious food, beautiful clothes, she gives to her husband and children, while I buy second-hand clothes to wear,” he said.

Once his daughter was sick, the amount of hospital fees was more than 20 million VND, Duc did not know where to borrow, his wife said “let me withdraw my savings”. As it turned out, every time her husband gave money to spend, she quietly deducted a small amount, in case she was sick. She often complains of poverty, but whenever her husband needs to take care of a large sum, her money appears. “I know that my wife always takes care of her family, so I have to thank her black funds,” Duc said.

Psychologist Nguyen Thi Tam said that, in addition to legitimate black funds, there are people who hide money from their spouses to drink, have sex or take up a large amount of money, which is the labor of both, to do their job. private. These types of black funds cause rifts and marriage breakdown.

The marriage of Ms. Hoang Ha (40 years old, in Ba Vi, Hanoi) is one of them. “Loved each other for 5 years, married for 10 years, but I only know a corner of him,” she said. Two years ago, Ms. Ha discovered that her husband had bought his own house and provided monthly allowances for his lover in Ho Chi Minh City.

Thanh Tung, Ha’s husband, is the director of a business, and sometimes informs his wife about going on a business trip to Ho Chi Minh City for a week. In the days with his wife and children, he showed so much affection and intimacy that his wife “deleted all the posts thanking her husband for her love”.

Two years ago, a friend discovered her husband was holding a baby boy, claiming to be three. Without reacting, she silently flew into Saigon at the address you gave her and was shocked “as if to die” when she witnessed her husband’s affair.

Tung admitted to buying a house, raising his wife and children, and having his own children for the past 5 years and wanted a divorce to go to another woman. “Even though I was financially compensated for having evidence of my husband’s infidelity, I could not keep the family for my children,” the mother said quietly.

According to Ms. Tam, for financial transparency, today, more and more young couples form marriage contracts. However, being too explicit about finances in a relationship means valuing money over feelings for each other. “This is not the right solution for family finances,” she said.

Sharing the same opinion, expert Phong Nguyen said that financial harmony is only a part of the harmony of a relationship. “If only financial harmony without empathy, understanding, two people are just partners, not husband and wife,” he said.

Instead of thinking about the black fund, Mr. Phong suggested that couples discuss how much they should contribute and share together, enough to ensure their quality of life, enough private space, and at the same time, no one can feel disadvantaged or too stressed.

“Need to be flexible in building a common fund, in stages. It is not possible for a husband and wife to make a lot of money, and someone who does a little to contribute equally. It is also not possible to force a spouse to pay a rigid amount all the time, when income fluctuates,” noted Ms. Nguyen Thi Minh.

Listening to the analysis, Hong Anh stopped the cold war with her husband. “Looking back, he has never done anything bad to me but always nurtured his family. From now on, I will be closer to my husband’s family so that he won’t be awkward,” she said.

The character name has been changed.