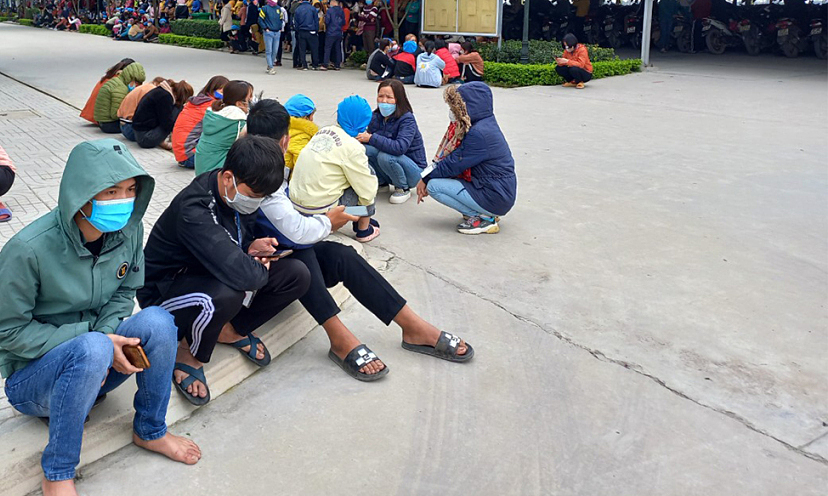 “I was cold and hungry, my limbs were weak and I thought I couldn’t go home,” said Pham Thi Tuoi in Quynh Luu, Nghe An when she saw her mother walking over. Her mother-in-law is no stranger to this scene. “The hot water is already on, take a shower and then eat,” she said.

Tuoi, 28 years old, has been a worker of Viet Glory THHH Company in Dien Truong commune, Dien Chau district since 2019, not long after this 100% foreign-owned enterprise went into operation. She received a salary of 3,670,000 VND, including allowances and overtime, about more than 5 million.

“After three years it’s still the same level,” she said. Failure to increase seniority pay is one of 11 points that caused nearly 5,000 workers of this shoe company to go on strike starting at noon on February 7.

In addition to the 11 main points that have been gathered to propose to the company’s leadership, other things that make Tuoi as well as many people frustrated is the fact that they must be present 10 minutes before each day; go to meetings only to hear no opinions; received a warning for the fault of the fingerprint scanner; the payroll is confusing, minus the ridiculous allowances. “They are like small sparks, sparking this strike,” the 29-year-old female worker shared.

She added that the company gives employees one day off each month and must use it during the month, when the benefits are cut. “For one person, the amount of money is not much, but thousands of people will be a lot,” Tuoi said.

For this mother of two children, salary and bonus is only an urgent part, the attitude of foreign managers makes “the heartbreak in the hearts of workers grow bigger and bigger”. “They cursed me for nothing. If I did something wrong, my shoes would be thrown in my face like a game,” Tuoi said. She hasn’t, but her colleagues have been. Another time, someone sneaked a piece of sticky rice to save hunger during overtime, was scolded by the manager like a slap and insisted on dismissing the job as a warning.

To ensure work efficiency, the company prohibits eating during working hours even before the start of overtime (from 17 to 19h) while other companies will have 5-10 minutes to distribute snacks. “Riding the sewing machine all day is very tiring. At noon, we still eat cold rice, so by the end of the afternoon shift, everyone is hungry and blurred. Many people have fainted from hunger,” the female worker shared.

The leader of Tuoi said that the company’s remuneration packages are not equal to those of other places, with unreasonable deductions, work pressure, high sales while wages do not increase. “Only in February, we have made sales in April”, Tuoi revealed.

Since the beginning of the year, the whole country has had about 30 strikes, this number is less than the same period in 2021 (35 strikes). According to statistics of the Vietnam General Confederation of Labor, the number of strikes in Vietnam has decreased continuously in recent years, from 329 in 2017, 214 in 2018, 120 in 2019.

“The scale of the strikes this year is not large, but there are many potential complications,” said Phan Van Anh, vice president of the Vietnam General Confederation of Labor. According to him, the cause of collective cessation of work and labor disputes in localities is mainly because workers do not agree with the form of salary payment and periodic salary increase of enterprises. Some outbreaks stem from the management’s inappropriate attitude towards workers, rigid regulations, poor quality of meals…

Ms. Hong, 30 years old, a worker in the goods inspection department of Haivina Hong Linh company (Hong Linh town, Ha Tinh province), also hopes to increase her salary when participating in a work stoppage with 500 other people, on the afternoon of February 15. Each month, Hong receives a basic salary of more than 3.4 million VND, plus allowances, due diligence and some other welfare regimes, total income is about 4.5 million VND. For nearly two years, this salary has not increased, although she and her colleagues have repeatedly proposed to the union.

Responding to the workers’ petitions on February 16 after the cessation of work, Haivina stipulates that the salary increase will only be 5% for employees who have worked for more than three years. Hong’s wishes were therefore not recorded in the minutes. “In the past, I worked as a worker at some companies in the North, people increased their salary twice a year. The salary system of this company was too mechanical,” Hong said.

In addition to the salary, the workers also have many pressing problems that have been stored for a long time. One day, Hong counted about 1,300 pairs of gloves, which were assessed as satisfactory, but every month, she was always deducted several tens of thousands of dong for no reason. Working daily from 7:30 a.m., but any worker who is late for even one minute, after 7:25 a.m. will be deducted 180,000 VND of the month’s dues. Hong said this regulation is too strict, sometimes driving on the road is very stressful. People say, if you miss three times a month, you will also accept the dues deduction. And here a minute late is subtracted immediately, there is no chance to correct the mistake.

Born in a poor family, Hong is used to raw meals with vegetables and sesame salt. At the company, many days Hong also eats raw rice. Many people complained to the manager, she said to herself, “I can stand this”. However, there are also things that I cannot travel, that is, not being able to choose annual leave. A year, a worker is entitled to 15 days of leave, but can only choose one or two days left, if he wants to take more leave, the manager chooses which day to take that day off. So sometimes the family has work, she has to take a break and accept to deduct the dues.

Last year, when Covid-19 happened in Hong Linh town, it had to be locked down, and Hong was allowed to stay at home. When she went back to work, she and everyone were excited because the leader announced that they would subtract the day off to avoid the epidemic into the annual leave.

Associate Professor Nguyen Duc Loc, Director of Sociallife, said that research shows that the workers’ strike is not a premeditated state but is a repressed emotional state, to a certain extent combined with a collective mechanism. will erupt. His research team once interviewed a strike in Ho Chi Minh City, where a worker discovered that his lunch contained maggots. That person knocks on the tray, suddenly the whole family eats riot, strikes, stops collective work and reflects many other unreasonable policies.

At Pham Thi Tuoi’s business, two shifts work 15 minutes apart. It is normally difficult to rally, but during lunchtime on February 7th, from a few disgruntled people led to thousands of people going on strike. In the following days, workers gathered in front of the company and did not come to work, only the team leader entered to negotiate.

Mr. Loc said that the number of spontaneous strikes has decreased and switched to a more rational dialogue. Workers have known to use interlocutors, intermediaries, and at the same time invoke legal policies when on strike to reach negotiations. However, Mr. Loc worries that the complicated causes of the recent strike could overturn this achievement. He suggested that this is the stage when it is necessary to promote the role of the trade union as an intermediary, first of all, to negotiate emotionally so that workers and employers can understand each other.

“The government has many supportive policies for workers affected by the epidemic, but on the contrary, many employers are still treating their workers in a way that reduces one more by two. During the pandemic Everyone is feeling hurt and once someone speaks up, it’s their common voice,” Mr. Loc said.

Mr. Phan Van Anh said that in the two years of the pandemic, employees have agreed to suffer with businesses such as accepting salary reductions, reducing working hours, taking alternate breaks, performing three jobs on the spot, not returning to their hometown to celebrate Tet, or overtime. to meet the delivery schedule. When the production situation gradually recovers, enterprises may lose part of their profits in the first time to increase welfare for workers.

After 6 days of strikes with many negotiations, Tuoi’s company finally decided to increase wages by 6% for workers from February 1. “After 3 years, my salary increased by 220,000 VND”, Tuoi said and said she was temporarily satisfied. Her husband is a driver, so the couple’s total income can be considered acceptable in the countryside.

As for Hong, her husband is a freelance worker with an unstable income. With a salary of more than 4 million VND, a mother of three always has to squeeze, next month make up for the previous month. Many times when Hong wishes the company had some small bonus every month or every quarter to encourage people to do well, she would try twice as hard. But her business did not issue this regime.