WTA Finals 2021, the tournament for the best 8 female tennis players of the year is currently taking place in Zapopan (Mexico). In the second match of the Teotihuacan group, the third seed Karolina Pliskova was determined to win the second consecutive match against Anett Kontaveit. However, the progress of the match did not satisfy the 29-year-old beauty. In the opening set, Kontaveit not only saved 3 breaks, but also brilliantly broke Pliskova’s serve game to win 6-4. Continuing the sublimation momentum, the Estonian tennis player made the opponent experience nightmare moments in the second set with 3 break-points and an overwhelming 6-0 victory. The double match again with a score of 2-0 (score of sets: 6-4, 6-0) in favor of Kontaveit.

Thus, Kontaveit officially enrolled in the semi-finals of the WTA Finals 2021 1 round early. This is a very commendable achievement because the Estonian player is ranked lowest and is participating in the tournament for the first time.

Next Gen ATP Finals: “New Nadal” in the finals

In parallel with the WTA Finals, another tournament called Next Gen ATP Finals for the 8 best male U21 players of the year taking place in Milan (Italy) went to the semi-finals. Number 1 seed Carlos Alcaraz, the player dubbed “New Nadal” encounters Sebastian Baez. 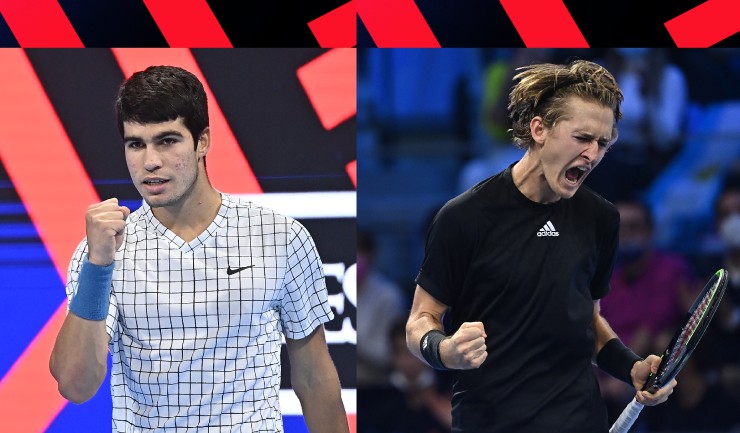 In front of an inferior opponent in terms of class (Alcaraz ranked 32 ATP, Baez ranked 111 ATP), Alcaraz easily overwhelmed in the opening set. The important break-point in the third game helped the Spaniard win 4-2 (the Next Gen tournament only hit 4 instead of 6).

Set 2, things went even more smoothly with Alcaraz. He broke up to 2 games of the opponent’s serve to win 4-1. Despite great efforts in the final set, Baez only lasted until game 6 before watching Alcaraz win the decisive break-point, thereby winning 4-2. The match ended with the final score 3-0 (score of sets: 4-2, 4-1, 4-2).

After the first seed Jannik Sinner was eliminated early, the 2nd seed Felix Auger Aliassime and 3rd seed Denis Shapovalov automatically became the leading candidates for the Stockholm Open championship. In the direct encounter in the semi-finals, Shapovalov showed greater determination and form.

In the final, Shapovalov faced Tommy Paul, who was not seeded but excellently defeated Andy Murray (quarterfinals) and 8th seed Frances Tiafoe.