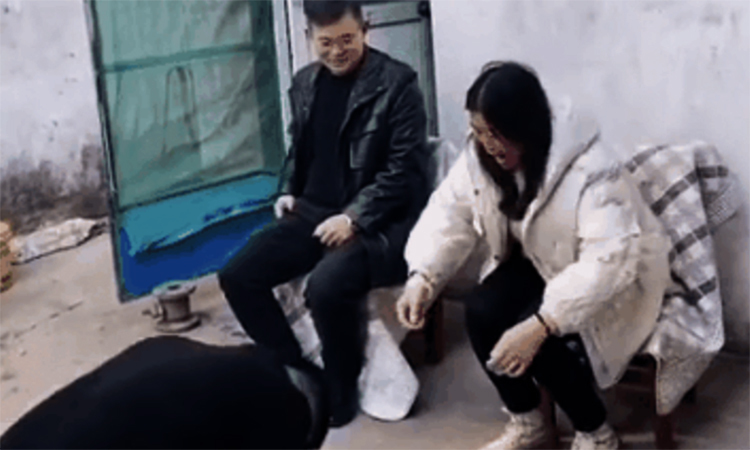 According to the custom of some places in China, when prostrating to the New Year, the elderly, the louder the sound, the better luck.

On February 11 (New Year’s Eve), a man surnamed La living in Jiangsu province brought an aluminum pot to his parents’ home to celebrate the New Year. When prostrating to his parents, this man pounded his head very hard into the pot, causing the “New Year tools” to flatten, the bottom almost flat.

La then posted this clip on his personal page with an explanation, beating his head in the basin comes from the wishes of his parents. “The grandparents said that if they make prostrations, the louder the sound, the luckier and more lucky money. That’s why I use aluminum brass to pay homage and make my parents happy,” La wrote.

The man in his 30s also said that, due to working away from home for more than a year, he could not meet his parents, this year’s 30th Tet is a particularly happy day because he can fulfill the filial piety of his only son. . La said, the head was not painful at first, but then felt pressure in the head due to the strong impact force. He even felt sorry for that broken brass.

After a video of La’s Happy New Year scene went viral on social networks, there were mixed opinions. Some people believe that this man’s actions are just outbursts, the purpose of creating a happy atmosphere in the family on the first day of the year. However, some people criticize this as outdated custom that must be eliminated.

“If I really appreciate my parents, do I have to put up the video to show off, that I am a filial son, can listen to my parents?”, A network user shared his thoughts.

La is not the first case of banging on hard objects to celebrate Tet. On New Year’s Eve, a man surnamed Liu living in the town of Heze, Shandong Province, shared a similar video. The only difference is that he wishes Tet with a red plastic tub.

Liu also bowed to his parents and hit his head down, causing the plastic tub to burst. The man explained in the video that his parents also promised that the louder the cry, the more lucky money, the better the new year. “Dad is sorry for money, and Mom is sorry. The whole family laughs together happily.” However, the video of Save has similarly mixed opinions.