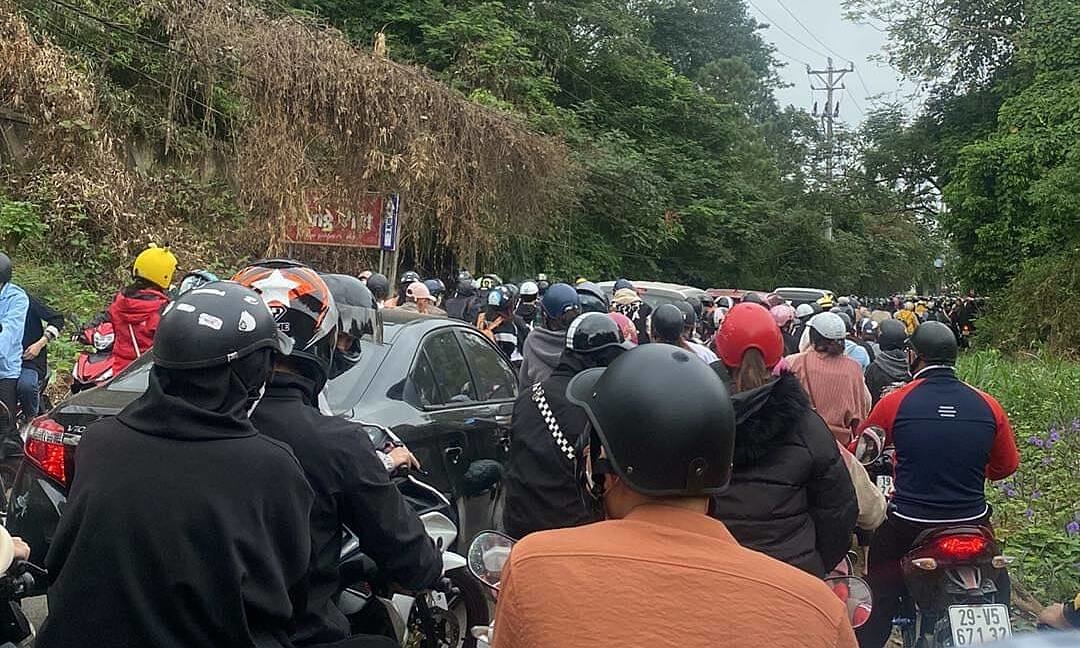 HanoiThousands of people flocked to Ba Vi National Park to admire the blooming wildflowers, but many had to return because of the crowd, queuing up all morning on November 20.

Looking at the line of people, cars lined up packed with a unique road from the foot of the mountain leading to the ticket sales area of ​​Ba Vi National Park (Ba Vi district) on the morning of November 20, Nguyen Thu Trang (19 years old) sighed in frustration.

Trang and her friends traveled nearly 20 km from their house in Thach That district to come here in the hope of admiring and taking pictures of the mountains dyed yellow by wild sunflowers in full bloom. But what the 19-year-old girl did not expect was that visitors had to queue from the entrance to the National Park to the ticketing area, more than a kilometer long, many people lamented that they had not waited for an hour for their turn.

Arrived at 9:30, but more than 11 o’clock, Trang was able to get to the ticketing station. “More than 10 times I came here at different times, but the first time I saw a long traffic jam, I couldn’t go on, I couldn’t go back,” the girl lamented.

Even after passing the ticket gate, Trang realized that the way to the top of the mountain still had many local congestions, especially the roadside sections with blooming wild sunflowers or the flower hill area because many people stopped to take pictures. Security forces constantly remind people to move, avoid traffic jams, but the effect is not much.

Stuck in the flow of people on many slopes, Trang said that many times she intended to return, but the afternoon down the mountain was almost gone because the motorbikes and cars moved up more and more crowded. Unfortunately, the effort is far away, so Trang and you continue the journey, hoping that the higher you go, the easier it will be.

Arriving 30 minutes before Trang, Nguyen Dinh Canh, 22 years old, in Nam Tu Liem district also had to wait in line to buy tickets. Wing said, his position is about a kilometer from the ticket office, with thousands of people in front of him.

“Even when I was just over a hundred meters from the entrance, it took me 16 minutes to move. Many sections had to wait 5 minutes to move one meter,” said Canh. After an hour and a half inching to the gate, the 22-year-old took another 30 minutes to queue to buy tickets. Total waiting time took nearly 2 hours, before moving to the parking area to climb to the top of the mountain.

“I don’t think it will be so crowded, it’s even more congested than the weekend pedestrian street. If I knew there would be a traffic jam in advance, I wouldn’t choose to go up today, not to mention the many congestions in the middle of the pass are quite dangerous for you. The female steering wheel is weak,” the guy shared.

A representative of Ba Vi National Park Management Board said that a large number of visitors came to visit on November 20, so there was a traffic jam in the morning. “Partly because on the weekend, which coincides with Vietnamese Teachers’ Day, it is the right time for wild sunflowers to be in season, so the number of visitors is large,” he said.

Although he waited patiently, but when he saw the traffic jam for a long time, many vehicles stood in one place, Nguyen Duong, 21 years old, in Cau Giay district decided to return after waiting for more than an hour but could not proceed further 500 m. . He noticed that there were a lot of people like him, who hadn’t been to the ticket office yet had to return because it was too crowded. It was estimated that even if he could get there, “the day would be over”.

The 21-year-old said that if he tried to wait, it would probably take the afternoon to reach the top, while it gets dark very early in this season. Especially, the road to the edge of the forest is narrow and quite steep, causing serious congestion.

“I wanted to spend the weekend in a quiet place with few people to relax, not try to squeeze in a crowded place, so I decided to return,” Duong said, adding that he would return in the middle of the week, or occasions to avoid holidays and Tet.

According to some locals, around 3pm on the same day the traffic jams ended.