(Sports news, ATP Finals) The focus of the semi-finals of the ATP Finals 2021 will be the match between Novak Djokovic and Alexander Zverev.

This match will be reported live, please pay attention!

Defending champion Daniil Medvedev will face Casper Ruud in the semi-final 1 ATP Finals 2021. The Russian tennis player soon made his name into the semi-finals after winning against Hubert Hurkacz and Alexander Zverev in the first 2 rounds. 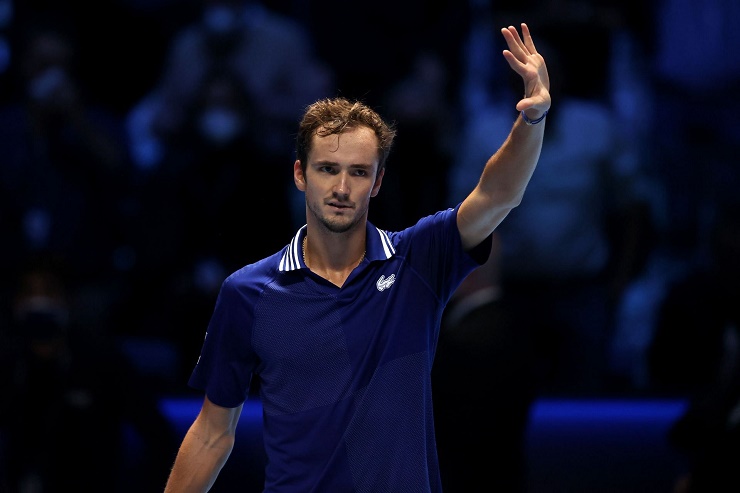 Medvedev will most likely put his name in the final

In the final group stage match against Jannik Sinner of the host country, Medvedev got off to a strong start and won the first set 6-0. But with the home crowd cheering, Sinner played inspired to win the second set 7-5.

Entering the decisive 3rd set, Medvedev played with bravery when he excellently saved 2 match-points to win the final 6-0, 6-7 (5), 7-6 (8) and won the third match. eight in a row at the tournament for the best eight players of the year.

In contrast, Casper Ruud’s ATP Finals campaign got off to a rough start as he lost his opening match to world number one Novak Djokovic in just two sets. In the next match, the Norwegian went upstream to beat Cameron Norrie to raise hopes of winning tickets to the semi-finals.

In the final match, Casper Ruud lost the first set to Andrey Rublev with a score of 6-2. But the 8th seed once again came upstream to win 2-6, 7-5, 7-6 (5) to reach the semi-finals of the ATP Finals for the first time in her career.

Medvedev and Casper Ruud have met twice before, with a head-to-head record currently being 2-0 in favor of the Russian tennis player. At the last meeting at the Mallorca Open, Medvedev easily overcame the opponent after only 2 sets. And with what has shown, the US Open champion 2021 has a great opportunity to make his name in the final.

What Djokovic has shown in the past two years is scary. The Serbian is near-perfect and is on his way to establishing himself as the greatest tennis player of all time. 2021 will see Nole win 3 Grand Slam titles, thereby equaling the record with Federer and Nadal. At this year’s ATP Finals, Djokovic is showing a destructive form when he has not lost a set. The Serbian beat Casper Ruud in the first match and blew Andrey Rublev in the next to get his name on the semi-finals soon. In the final match of procedural nature, Nole still easily defeated Cameron Norrie to confirm the position of the No. 1 candidate for the championship.

In a spectacular year, the defeat at the Tokyo Olympics certainly still haunts Djokovic. And Nole’s sorcerer is none other than Alexander Zverev – his opponent in this year’s ATP Finals semifinals.

Zverev is probably the most consistent player this season after Djokovic. The German tennis player has reached the semi-finals of three Grand Slam tournaments and won two Masters titles in Madrid and Cincinnati. Zverev’s pinnacle this year is undoubtedly the gold medal at the Tokyo Olympics.

In Turin this week, Zverev beat Matteo Berrettini in his first match and then lost to Daniil Medvedev in a three-set “action movie”. Then, the German tennis player overcame Hubert Hurkacz with a score of 6-2.6-4 to advance to the semi-finals against Djokovic.

This will be the 11th meeting between this duo and Djokovic is leading Zverev 7-3 in head-to-head record. The two players last met at the US Open not long ago, where Nole won in a five-set match. That promises to make this rematch between the two players extremely unpredictable.

(Video tennis Djokovic – Norrie, Blue board ATP Finals 2021) Outstanding class is what the audience witnessed in…