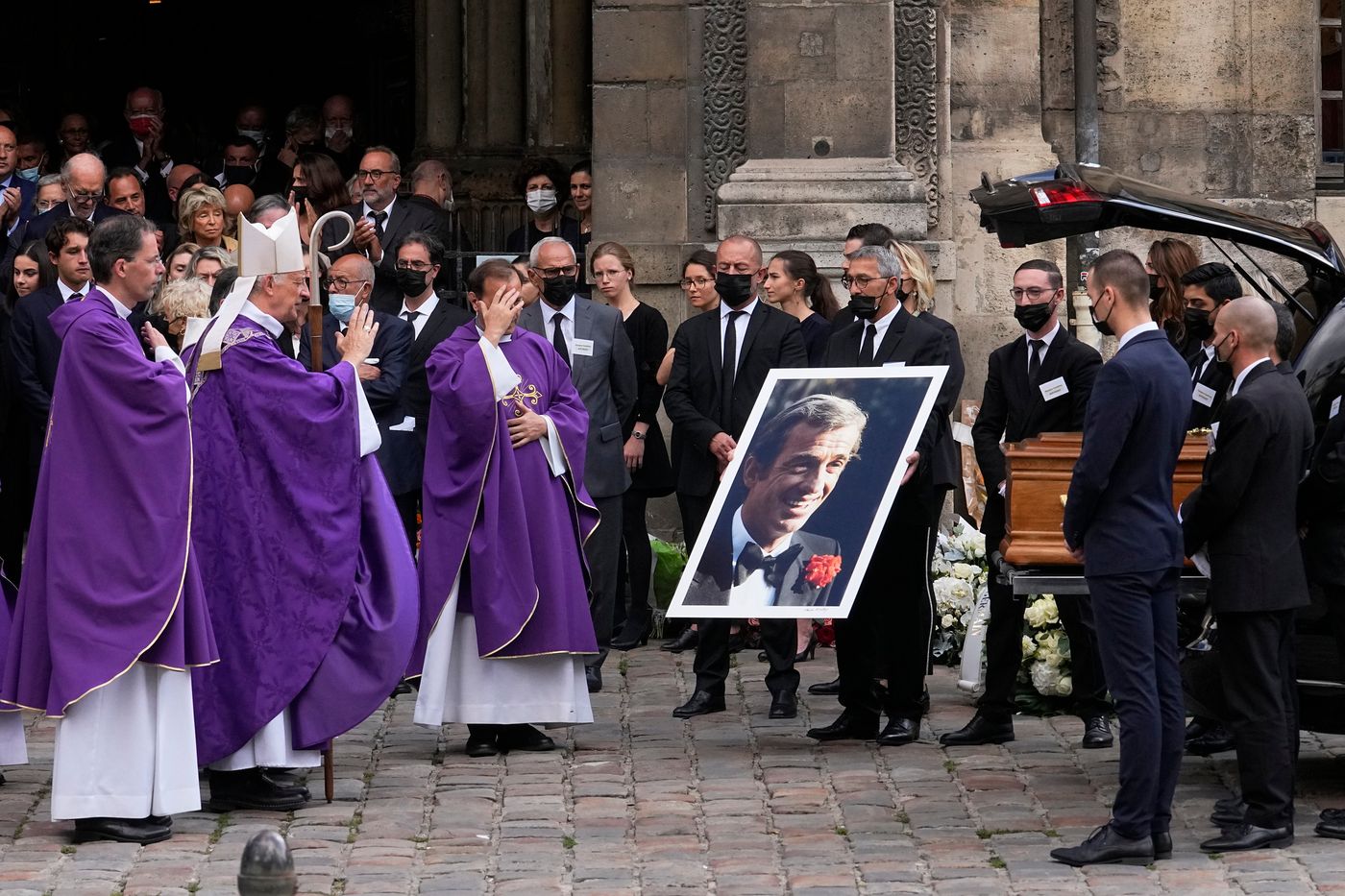 Two large portraits of Jean-Paul Belmondo on either side of the altar, under the superb starry vault of the recently restored church. After the unanimous emotion at the announcement of his death, at the age of 88, Monday, September 6, after the national tribute paid this Thursday to the Invalides, the religious funeral of Jean-Paul Belmondo took place, celebrated at the church of his parish Saint-Germain des Prés, in the 6th arrondissement of Paris, this Friday, September 10. It was a final and poignant reunion for his loved ones and for the great family of cinema and the arts, without camera or microphone, during a collected celebration.

→ READ. Homily at the funeral of Jean-Paul Belmondo: “The“ beloved of men ”meets today the“ Beloved of the Father ””

Behind the masks, we could recognize the actors, comedians and friends of the deceased artist, such as Michel Drucker, Jean Dujardin, Béatrice Dalle, Guillaume Canet, Véronique Jeannot, Richard Anconina and so many others, foremost among them Alain Delon and his son Anthony.

Tributes were followed by the great silence that reigned when the coffin entered the church, recalling how much Jean-Paul Belmondo was attentive to others, with contagious joy, “So laughing, so joker, so kind, so generous”, testified Muriel Belmondo, the actor’s sister. His grandson Victor spoke on behalf of the grandchildren and grandnephews, referring to the man “Passionate and exciting, astonished and astonishing”. And the memories came back: “He was playing clown with us, it’s just a dream. “ The funeral directors stranded in the elevator for twenty minutes this week will be the last joke attributed by Victor Belmondo to this grandfather who constantly played “Gugusse”. “He opened the way for us to a life of joy and happiness”, concluded the grandson in turn comedian.

His comrades of cinema and laughs have taken over, such as actors Thierry Frémaux, general delegate of the Cannes Film Festival, Albert Dupontel or Claude Lelouch: “His smile was a passport”, confided the director before giving the celebration of the Cannes Film Festival by launching a shocking standing ovation of nearly two minutes. “I don’t know, it came like that, it was spontaneous”, confided Claude Lelouch to The cross, at the end of the mass.

The grain that fell to the ground

The celebration was able to continue, chaired by Mgr Philippe Marsset, auxiliary bishop of the diocese of Paris. It was with Paul Belmondo, the son of the deceased, that the text of the grain fallen to the earth, extracted from Saint John (12, 23-26), was chosen for the Gospel. The celebrant spoke, to begin with, of the fruits of an entire existence: “The actor he was, lived in his ordinary life what he knew how to give to others: joy, generosity, humor. “

And Bishop Marsset insisted on the meeting of death: “We don’t die for nothing. Death is part of life. It is not the end of it, it is our birth in the mystery of God. (…) On the day of our death, we come out of the womb of our earth and we are born into an unimaginable reality. In this reality, at the center of everything, is our Father who is in Heaven. “

” I am a believer without being a practitioner. Believing also gives me the certainty that I will eventually find those I have loved … “, Declared Jean-Paul Belmondo in 2011.” Today, the brilliant man meets the Son of the Most High. (…) The “beloved of men” meets today “the Beloved of the Father” », Announced Mgr Marsset, concluding his homily: “Lord, I am not asking you why you took Jean-Paul Belmondo from us, I thank you for giving him to us”.

At the end of the Eucharist, the members of the assembly were invited to a final gesture of homage. After the grandchildren gathered around the coffin, it is Alain Delon alone, who slowly leaning on his crutch, walked around the coffin, like a last farewell to the friend and rival of always.

The public, in turn, contained for several hours on the sunny Germanoprene church square, applauded the release of the coffin for a long time. As soon as the assembly left, an impressive downpour flooded the square. The sign of a last pirouette of the artist?