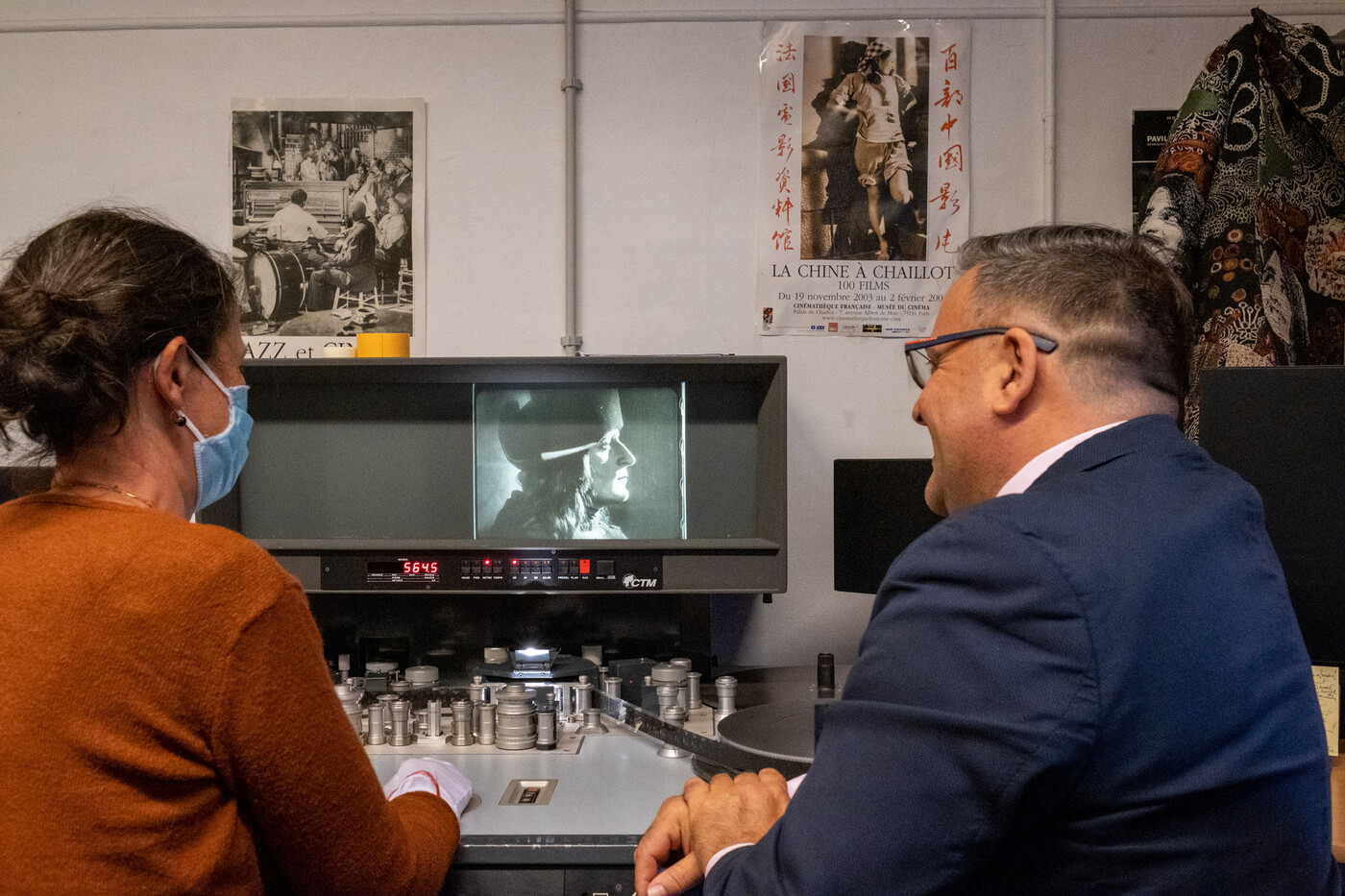 Buried under the mounds of greenery which conceal the fort of Saint-Cyr from outside view, in the middle of the new town of Saint-Quentin-en-Yvelines, the assembly room housing the restoration of the Napoleon Abel Gance looks like an entrenched camp. Instead of ammunition, reels of film neatly stacked on shelves set throughout an underground vaulted gallery that adjoins the small room.

The color of the boxes makes it possible to distinguish the origin. There are the “179”, the “Corsican copy”, those of Toulouse but also those of Belgrade, Copenhagen or New York. “My war chest”, exclaims Georges Mourier mischievously, staring at them.

It is to this passionate and talkative director that the titanic enterprise of “Rebuild” Abel Gance’s 1927 masterpiece, which over the years had been “Scattered like a puzzle”. Lasting seven hours, the original version had, despite five attempts to restore it, irremediably disappeared. What began as a simple expertise took a total of thirteen years of his life with its share of discoveries, twists and sleepless nights.

The fort of Saint-Cyr, located in Montigny-le-Bretonneux, in the Yvelines, houses the editing room where the titanic work of restoring Abel Gance’s masterpiece is carried out. / Marjolaine Bariou for La Croix

At the time of completing his mission, Georges Mourier feels no regrets. Quite the contrary. “It’s as if we had asked a Sunday painter to tidy up Michelangelo’s studio! Immerse yourself in the heart of creation. “

It all started in 2007. Camille Blot-Wellens, who has just been appointed director of collections at the Cinémathèque française, is faced with a dilemma. Since there are about twenty different versions of the Napoleon, which one should act as a reference? And what do the 300 boxes kept in their fund correspond to? Georges Mourier, who has just devoted a documentary to Abel Gance, is commissioned to see things clearly and asks for the assistance of Laure Marchaut.

A first surprise awaits them. “A real mess, he recounts. There were boxes which contained Napoleon but were not listed as such and others where there was indeed Napoleon, but not the correct one. It was not a question of a lack of conservation, but of Gance’s modus operandi who, to make his 1927 film profitable, reused bits of it in his talking versions of 1935 and 1971, including by cutting directly into the negative. original. “

Georges Mourier in the tunnels of Fort Saint-Cyr where the French film library keeps the film copies. / Marjolaine Bariou for La Croix

In addition to the 300 boxes at Fort Saint-Cyr, there are the 300 that the National Cinema Center (CNC) keeps. The discovery of 179 others poorly listed leads them, like nesting dolls, on the trail of 200 additional reels deposited since the 1980s at the Toulouse film library.

The duo then find themselves facing the “Monster”, as Georges Mourier baptized it. Thanks to these discoveries and to the “sequencer”, a document listing the order of the scenes as Gance had wanted it, established by Marie Epstein and Henri Langlois in the 1950s, during the first restoration, Georges Mourier and Laure Marchaut think then have everything you need to “Rebuild” the film.

A discovery that changes everything

But a new discovery will change everything. The duo knew that the film had been screened in April 1927, during a premiere organized at the Paris Opera, in a four-hour version ending with the famous final triptych (three images projected simultaneously on three screens), then a month later at the Apollo, for the press and distributors, in a version lasting nine thirty.

→ ANALYSIS. For Emmanuel Macron, “Napoleon is a part of us”

What they didn’t know, like their predecessors, was that they weren’t dealing with two versions of the same film – one short and one long – but two films with different dramatic and artistic biases. However, successive restorations had mixed the two.

Georges Mourier still remembers that night in the summer of 2010 when, by simultaneously viewing on his computer the shots of the same sequence from different sources, the evidence jumped out at him. “A chasm then opened up under our feet. Either we remained in denial, or we had to start from scratch without knowing either how long it was going to last, or how much it was going to cost. “

The decision taken by the Cinémathèque is to reconstitute the so-called “Apollo” version, reduced to seven hours by the director himself with a view to its commercial exploitation. This was seen by the public at least until 1931, before being condemned by the arrival of speaking and amputated by the scissors of its author.

Then begins for Georges Mourier and Laure Marchaut a quest through film libraries around the world in search of the missing parts. “This film is like a polyphony, insists the conductor of the restoration. Each shot is necessary to find its internal rhythm. Gance spoke of it as his music of light. “

A first assembly draft was completed in 2012. It remains to accomplish an enormous technical work to homogenize the texture of the films, to find the “Tint” of the black and white of the time, give it back its “Vibrato”. Engineers from the Éclair laboratories are mobilized to make “tailor-made” products and will develop processes that did not yet exist.

→ MAINTENANCE. “Napoleon has a transgressive, rebellious, punk side”

The economic vagaries of the company, which has since been bought out by L’Image recovered, and the social plans that accompany it delay the process a little longer. The “production” of the film does not begin until 2017 and will have required a year and a half of preparation. It should be completed at the end of the year at an estimated cost of between 2 and 2.5 million euros.

Work on the rewinding table. During the original editing, valuable information was placed in the “margin” of the film. / Marjolaine Bariou for La Croix

Stuffed with anecdotes, Georges Mourier’s account of this adventure is akin to an epic whose excessiveness is equal to what he considers to be a “Of the three monuments of world cinema” with Metropolis by Fritz Lang and Intolerance by DW Griffith. “It’s a revolutionary film in every sense of the word. A paroxysm of creativity and invention. Georges Sadoul said that certain sequences opened up to the cinematographic language of the roads which are still not explored. We don’t work on relics but on living matter, a power that can still be a source of inspiration. “

The director launches on one of his screens the restored sequence known as “from the Cordeliers”, of which he is most proud. Overprints, a short cut that accelerates like a staccato on the faces of the people who become one, before Danton and the crowd sing a Marseillaise to which the restoration work has restored its original synchronization, allowing the public to sing the chorus in the room. “Gance brings cinema to a metaphysical level”, exclaims Georges Mourier with admiration.

Photogram taken from the Cordeliers sequence.

Two hundred years after Napoleon’s death, the lyricism of Abel Gance’s work can be surprising. “There is Victor Hugo at Gance, he admits. It shows Napoleon as the one without whom the Revolution would have failed, which is not far from what historians say. “ It will take a little more patience to discover the restored film. Without doubt in 2022, advance cautiously Georges Mourier. “The room to welcome him with an orchestra on stage and a triple screen does not yet exist …”

1927. Release Napoleon, designed by Abel Gance as the first part of a historical fresco in six films dedicated to the Emperor. The arrival of speaking and financial difficulties prevent him from implementing this project.

1935. A first speaking version of his film is produced under the title of Napoleon Bonaparte. In fact, the filmmaker has shot new scenes and uses excerpts from the 1927 film as a flashback.

1960. Abel Gance tours in Yugoslavia Austerlitz, which is considered the 3e part of his project, with Pierre Mondy in the role of Bonaparte.

1967. Realization with Jean Chérasse of Valmy, a documentary triptych for television which uses some of the images from 1927.

1971. Bonaparte and the Revolution, produced by Claude Lelouch, takes up the 1935 film and adds new scenes to it. Its full version is 4:35.