Moma Bassoko was the focus of attention in the opening match of Duc Giang Chemical Club Hanoi and Kinh Bac Bac Ninh in Group A, the “death” group of the 2022 National Volleyball Championship taking place on the evening of July 5 in Hanoi. Ninh Binh Gymnasium. This is the debut match of the Cameroonian women’s three-time African champion. Having participated in prestigious tournaments such as the world championship or the Olympics, Moma Bassoko is considered as the best quality foreign player that Vietnamese volleyball has. Regardless of the audience’s expectations, the smasher born in 1993 had a top performance that made viewers constantly admire. With a height of 1m84, Moma Bassoko has a lot of remarkable high jump situations, launching smashes through the barrier of Kinh Bac Bac Ninh to score points. 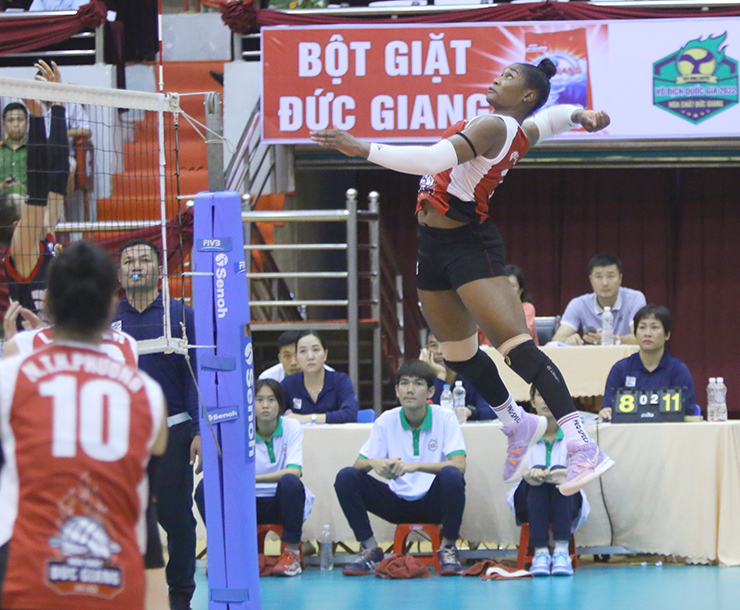 Not only attacking well on the two sides, the Cameroonian female counter-attacker also often stepped back to gain momentum before jumping very high to launch shots from behind the impressive 3m line. 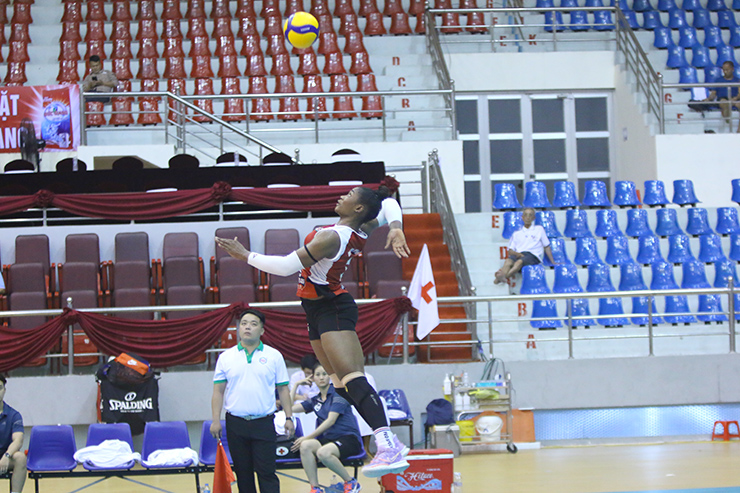 The excellence of this foreign soldier is also reflected in his ability to hold well and block the first step, many times helping the home team defend successfully. Her impressive performance helped Duc Giang Chemical Club Hanoi have an overwhelming 3-0 victory (25-18, 25-16 and 24-20), thereby having a favorable start at this year’s tournament. . Sharing after the match, Moma Bassoko said that she has not shown her full potential because her body still feels tired and secret because Vietnam’s hot and uncomfortable weather is too different from Korea’s. Country, where she competed before. Meanwhile, head coach Nguyen Huu Ha commented: “Apart from a few situations where there was no good coordination with the second pass, I am completely satisfied with Moma Bassoko’s performance in this match. Most of the passes are just right, he does it very well.” The head coach of Duc Giang Hanoi Chemical Club shared that although the home team had completed the goal of winning, he was not really satisfied when the students still had technical errors, some situations of deploying attacks. work is not good. Coach Huu Ha said that the next two opponents of the team, VTV Binh Dien Long An and Geleximco Thai Binh, respectively, are very difficult, in addition, Ninh Binh Doveco is also a very strong team.

“This year a lot of teams have an investment, not just our team. However, we will always play to the best of our ability and aim for the highest. The peculiarity of Vietnamese volleyball is the playing of 4-5 consecutive matches in the same week. So me and the coaching staff will try to make the athletes able to compete well with this intensity, “said Mr. Ha.