The appointment of Genius Loci at the Oscars surprised everyone, including its director. Adrien Mérigeau did not expect to see his animated short, mysterious and bewitching, the nocturnal drift of a young woman in search of herself, to be selected alongside the traditional Pixar studio film. Burrow, charming fable on the virtues of collaborative work, is not unforgettable but is still a favorite.

Much more experimental, Genius Loci is a sensory work that seeks to restore the emotions felt by his character in the colorful and noisy meanders of a popular district of the capital. A film that benefited from the graphic style of designer Brecht Evens, known for his illustrations and albums bathed in chaotic urban atmospheres with acid colors. 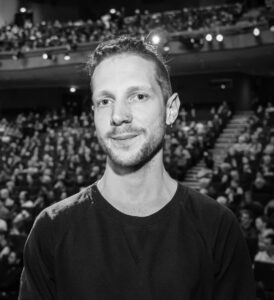 Worn for four years by Adrien Mérigeau and his producer, Amaury Ovise, from Kazak Productions (winner of the César for best animated short film last year with The night of plastic bags), this film on the “spirit of a place” (translation of the Latin phrase that gives it its title) and the way it shapes its occupants is a form of achievement for the young 37-year-old filmmaker.

Like many of his peers, Adrien Mérigeau came to animation cinema out of shyness, liking to draw comics in his corner, shoot short films on his Super 8 camera and tinker with video games on Flash software. The hedgehog in the fog, one of Yuri Norstein’s masterpieces, the title of which seems to describe the child that young Adrien was, made a great impression on him.

” I then discovered the richness of auteur animation, during my studies at Emca, in Angoulême, by watching the short films broadcast at night on Arte that we were recording, those by Jan Švankmajer, Norman McLaren. “

“I was amazed by the possibilities offered by this independent cinema and the strength of its community. “

He was also won over by the Japanese films of Hayao Miyazaki or Katsuhiro Otomo, and in particular his flagship work, Akira (1988). “When I saw Akira’s line tests (editor’s note: series of sketched drawings that allow you to see if an animation works), I found them almost more beautiful, more alive than the film itself. We see the pencil strokes, the traces left by the eraser, the repentance… ”

“For Genius Loci, I made sure that each shot could be viewed without the narrative being taken into account, by experiencing the lived image as a series of shapes and lines drawn on paper. “

On the edge of abstraction, Genius Loci is imbued with a spiritual dimension which is not without evoking the atmospheres of the films of the Irish Tomm Moore (also nominated at the Oscars this year for the feature film The wolf people), Brendan and the Secret of Kells (2009) and The song of the sea (2014), on which Adrien Mérigeau worked after his studies.

“Tomm Moore’s relationship to the forces of nature (water, stones, animals) inspired me a lot. He mixes in a very gentle and intimate way his Catholic education and Celtic pagan traditions. This approach to spirituality reassured me because I am very suspicious of religion. “

He develops this way of observing nature in his first short film, Old fangs (Vieux crocs), a painful reunion between a young wolf and his abusive father, in a lush and vibrant nature.

His parents, who play contemporary music and participated in the soundtrack of Genius Loci, taught him to have a meditative listening of sounds.

“All sounds can become musical if we take the trouble to listen to them carefully. This listening is a way of being in the world. A singer friend told me that she felt that a spirit guided her during her concerts. This is why a scene from Genius Loci takes place in a disused church, a spiritual place reinvented by artists, which evokes this form of spirituality linked to creativity. “

Returned to France in 2015, Adrien Mérigeau knows what he wants, leaving from a production, that of the feature film Pachamama, whose artistic orientations he does not share. He then gets down to Genius Loci, whose writing process, constantly put back on the studio, was not an easy task.

A film that is not immediately given to the spectator either. His vision has misled more than one, including the author of these lines, but Genius Loci improves over time, gains in depth and intensity as time passes and we see it again. Hopefully Oscar voters took the time to let it infuse their minds to be won over by the film’s.