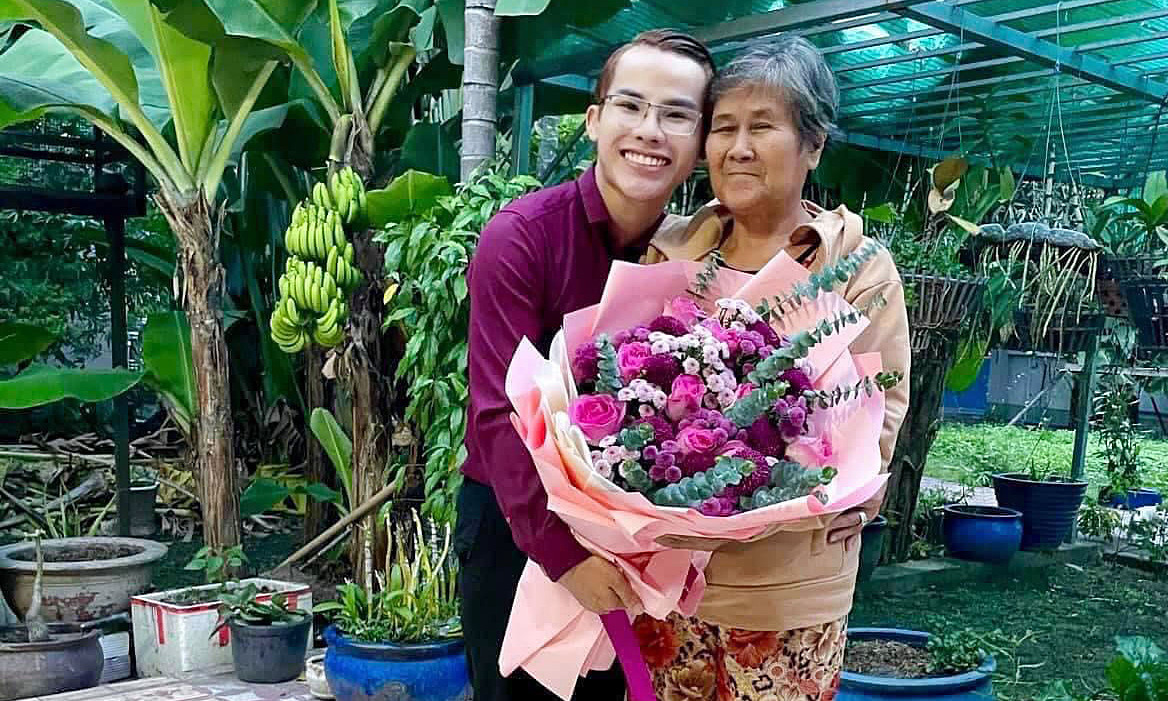 Ho Chi Minh CityWhen she picked up the 5-month-old baby Le Hoang Phong from the police officer, Hanh only knew that the boy’s parents were both dead, and the whereabouts of his relatives were unknown.

Nguyen Thi Hanh, 70, calls Phong a “level 1 orphan” in SOS Go Vap Children’s Village, Ho Chi Minh City. Other children, the one who lost both parents and still has relatives, some who lost their father and still have their mother, some who have parents but cannot raise their children, Phong alone has no information about his origins.

“I often tell some children, his younger brother is disadvantaged, now he has to love him. Other children still have this person to look forward to, but his family and relatives are us,” recalled Mrs. Hanh.

According to her memory, in 1992, Le Hoang Phong came to the village at the age of 5 months, with a birth certificate. The boy was born in Hamlet 4, Suoi Ngo Commune, Tan Chau District, Tay Ninh Province. In the parent column, they all write “died” from illness. The policeman who handed Phong over to the village said that there was a blind brother on Phong. But now, no one knows who he is still alive or dead.

In the dispatch sent to the SOS youth village, the Women’s Union of Tay Ninh province wrote that Phong was orphaned when he was less than a month old and was raised by a female cadre in hamlet 4, Suoi Ngo commune. The female cadre’s family is poor, so they have to ask the whole hamlet to support Phong. The boy was sent back to the youth village in a state of rickets, grade 1 malnutrition.

On the day of leaving, the policeman cut some of Phong’s hair and told him he would return to find it one day. Many times Mrs. Hanh just held her child and looked out, hoping that person would return and bring some information about the adopted child’s relatives. The adoptive mother just wanted that when she grew up, Phong knew a little bit about herself, and was less moved by difficulties on the roads of her life. But for 18 years Phong was in a young village, no one has returned to find him. “12 children in the family, I love them all, but I want to make up for them the most,” she said.

Mr. Nguyen Van Phu, Deputy Director of SOS Go Vap Children’s Village, said that in the youth village, all mothers are single women, not attached to the family so that they can give their children full love. “For Hanh’s mother in particular and the mothers in the young village in general, the children are all blood,” he said.

Returning to the young village, Phong was sick and timid, his adoptive mother had to carry him around the hospital. I heard that there was a teacher in Cu Chi who could cure it, so she also brought it back. In 9th grade, Phong argued with his teacher, had to write a review and invite his parents to come. In his mind, the adopted son thought that his mother would scold him. But Ms. Hanh reprimanded the teacher for not listening to the students’ thoughts, not understanding the meaning of the reprimand. “My mother protects me, loves me like a child, not just for duty”, he broke.

Once, Phong went to a neighbor’s house, also from a young village, playing with mischief, so he was hit by a large mirror, broken pieces of the mirror cut everywhere. Mrs. Hanh carried her child to the hospital. The doctor told her to stitch 10 stitches in the eye, 15 stitches in the head, she cried, holding Phong’s hand tightly. “When I woke up, I saw my mother still holding my hand. It felt very good, because I thought I also had a loving and comforting person,” he said.

She admits she doesn’t know much, but Mrs. Hanh always advises Phong “I have no one to lean on, so I have to study hard to master my life”. On the day Phong failed college, many people advised him to take an apprenticeship. Mrs. Hanh said nothing, quietly cycled 30 km back to her hometown in Cu Chi, borrowed a gold coin from a relative, sold it for money, and sent Phong to the training center.

“Holding the gold thread in my hand, I was scared and trembling. Thinking I had to pass it. At that time, I understood what it was like to sacrifice, and told me to know how to repay,” the young man recalled. At that moment, he officially started to practice. In 2011, Phong left the youth village and became a student majoring in International Studies, Ho Chi Minh City University of Education.

While going to school, Phong worked as a tutor, serving coffee shops, distributing leaflets, carrying calves. On Tet holiday, he was introduced by an acquaintance to clean the house and sell groceries. The school started at 6am, so Phong got up two hours earlier, took 2-3 bus routes to get there. In the morning he studied, in the afternoon he worked as a bartender until the next morning.

The money he earned, Phong brought it home and sent it to Hanh’s mother to keep it. “Sometimes I’m tired and pressured to want to give up, but when I call my mother, see her smile, wrinkles shove together, I urge myself to try again,” he recalls.

At the end of his sophomore year of university, Phong was sent by an acquaintance in the SOS village to work as an assistant interpreter for events. Here, he is cultivated and inspired to learn foreign languages. After days of hard work and practice, Phong became a cabin interpreter, having translated for many events of the US State Department.

At that time, by chance reading the autobiography of a modern woman who likes to move, Phong wished he could go abroad to learn a lot. He went back to tell his mother his wish, asking her for the money he had sent. Phong’s first trip was to Malaysia.

Hearing that someone told her that she had to go through the customs gate to have 500 USD, Hanh ran to borrow a relative. On the day the adopted son was about to leave, she put a stack of money in her hand and told her to “just take it to show it to people and then bring it back to her mother to pay”.

After the first journey with her mother’s support, after four years of university, Phong traveled to all Southeast Asian countries. Returning after each trip, he felt warm when he knew that Hanh’s mother was waiting at home. While working and experiencing, Phong is looking for learning opportunities to develop himself. “The older I get, the more I fear that I won’t grow up soon, I won’t have the opportunity to repay my mother,” the boy confided.

In 2017, Le Hoang Phong studied for a Master of Educational Leadership at the University of Malaya (the top 1 school in Malaysia, the top 40 in the world for education). At the end of 2021, he is one of four young Vietnamese future leaders selected to join the Future Leaders Connect Program, a global policy program of the British Council. The program has the participation of 63 young people from 13 countries, selected from more than 9,000 best profiles worldwide.

Currently, he is the founder and CEO of a social enterprise, providing English courses in Ho Chi Minh City. Phong is also a member of the organizing committee of Care Leaver International Community, advocating policies to comprehensively support orphans who have grown up and left the centers. shelters, open houses around the world.

Earlier this year, the orphan was eager to return to Cu Chi with his mother Hanh, when he was awarded a full scholarship by the US State Department to participate in the YSEALI Professional Fellowship program, with the theme Governance. and Society (Government and Society).

“In any big event in his life, Phong also welcomes Hanh’s mother to attend, as a way of gratitude. Every Tet holiday, he goes back to the children’s village to visit the mothers, staff and children living in the village. We are very happy and proud that Phong has really grown up,” said Deputy Director of SOS Go Vap Children’s Village, Mr. Nguyen Van Phu.

Three years ago, Hanh’s mother retired and moved to the retirement home of the young village to live. During more than 30 years in the village, she raised and loved about 40 children. Every Tet holiday, like Phong, the children carry their grandson and granddaughter to visit their mother, whose hair has turned gray. At the beginning of this year, Ms. Hanh fell ill with a life-threatening illness, and her children from Australia and the US… also flocked to visit and take care of them.

“For many people, being orphaned is unhappiness, but I consider myself lucky. Thanks to the love and tolerance of my mother and the young village, I came to life without being alone,” the young man said.