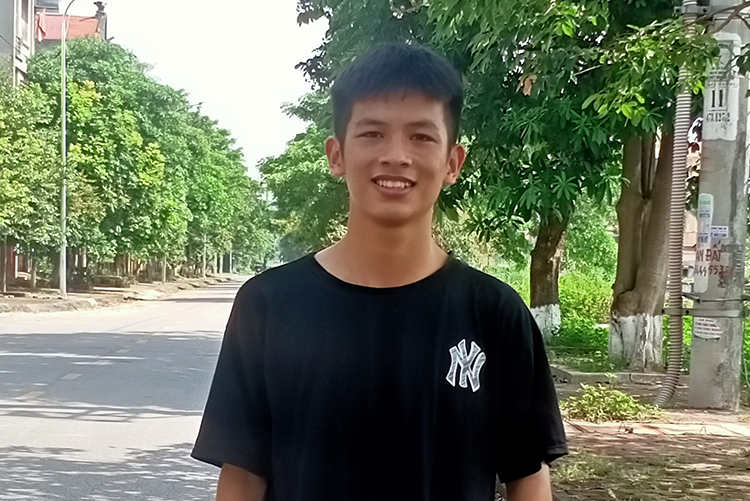 Bac NinhWhen she received news that her son had won a billion VND scholarship, Mrs. Nguyen Thi Banh was happy but in tears because she would have to be away from her son for a long time.

This is the first time in her life that a 70-year-old woman has to be away from her child for so long. She is happy that with a scholarship from the British University (BUV), she will be able to study well, but sad because she will not know who to rely on.

Mrs. Banh from Lap Ai village, Song Giang commune, Gia Binh district, Bac Ninh province adopted Nguyen Nhu Huyen when he was more than a month old. The one who brought the red boy home was the one she called her husband, but was not married. He mended bicycles, she worked as a farmer, lived together but had no children. “People give up, I take it back, then I work as a prop in old age,” he encouraged because he knew that she was blind in one eye, and had 20% vision in the other eye.

Huyen grew up, his childhood was associated with his father’s bicycle.

The boy he picked up was raised from rice water and begging milk, so he was shorter than children of his age. Every time he went to patch a car or work in the fields, the father would put his son in the basket in front of him. Dad worked hard, Huyen chirped beside him. In grade 2, the boy knew how to help sow and reap. When he was tired, he asked to go ashore to rest and listen to his father tell the story of the Three Kingdoms.

“Many people are so good. My old teacher is also good, so my name is like him, and later I try to be good at it” was the last encouragement he said to his son, before he passed away when he was 13 years old. Only when her father died did Huyen know that she was an adopted son. He was not given a mourning towel, nor was he allowed to see his grandfather’s face one last time.

The death of his father completely changed Huyen’s personality. Originally a studious boy, always at the top of his class, Huyen gradually shrunk back. The blind mother could not afford to take care of her child because she was exhausted from taking care of food and clothing.

Depressed Huyen dropped out of school. The 13-year-old boy at that time wanted to go to work to earn money, but his small figure was not accepted. Once wandering on the street, the homeroom teacher saw a reminder “don’t let life be buried in the three words ‘orphan’, don’t live forever in ridicule”. The boy suddenly realized his situation like that, if he didn’t study well, he would be despised. Huyen returned home, took out his books to review old lessons.

Ms. Banh’s eyes are getting worse and worse, her vision is from 20% to 10%, and her bones and joints are painful… she has to take medicine regularly. During the harvest season, knowing that her mother’s health was weak, Huyen went to school in the morning, brought rice to work in the field at noon, and returned to school in the afternoon. Mother and daughter worked hard with two poles of rice, pulling well enough to eat. Occasionally, there is a case of a few dozen pounds of rice surplus, and Banh sells them and buys her children new clothes.

Huyen’s mother and daughter are always poor households in the commune. The tiled roof house before being repaired by the state in 2017, leaked every time it rained. Dozens of pots were prepared by the boy, lined up on the brick floor, under the holes in the roof. The rain came, the child caught it, the mother caught it, but soon enough, every match in the house was soaked.

In order to support her mother, besides farming, Huyen also herds cows and knits bamboo frames. Although she is poor, only studied until 2nd grade, literate is not, but Mrs. Banh always encourages her children to study, hoping to change their fate. During the middle school years, Huyen was always a good student, in high school he became the class president, one of the excellent students in the class.

“With Huyen’s management, the class from 39/39 in discipline has risen to the top 3 of the whole school last school year,” said Ms. Dao Thi Toan, head of class 12A12, Le Van Thinh High School, where Huyen used to be. share learning. To her, this student is a life force that knows how to rise to fate.

At the beginning of the 12th grade, Ms. Banh’s condition got worse and worse, and her drug bill increased. He sold a newborn calf to get money to buy medicine for his mother, but before he could sell it, he died. The whole fortune suddenly swept with the wind.

Lacking money, the senior student applied for a job at a coffee shop outside the district, 3 km from his house. In the morning, she goes to school, and in the evening, she rides her bike to the shop to work from 19:00 to 23:00. Go home, take a shower, eat dinner, and then sit at the desk to study until 2 am. In the first days of continuous work, when he sat at the table, he was weak, just wanted to let go of the pen. Each time, Huyen opened the phone again, and in front of her eyes was the background picture with the words “Must try, don’t back down”. That line Huyen wrote on paper and then took a photo, to remind herself, no matter how difficult it is, do not give up.

At the end of grade 12, with the support of the Aspiration Fund, Huyen applied for a scholarship Lion heart of British University in Vietnam. In the essay sent to the school, Huyen talked about her biggest dream, which is to change the future and give her mother a fuller and happier life. “To do that, I know I need to make more efforts. That’s also the only motivation for me to train myself at the moment,” the 18-year-old wrote.

At the end of July, Huyen went to Hung Yen to prepare for admission, only Mrs. Banh was at home. Many times she felt weak but she did not dare to call her children, partly afraid to ask for a neighbor’s phone, partly knowing that Huyen’s sick mother took the car back, affecting her studies. The son knows, blames his mother, promises to go to school and work next time to accumulate to buy her an old phone.

“When I miss or get tired, my mother has to call me. Now, I only have my mother as the only relative in the world,” he instructed.