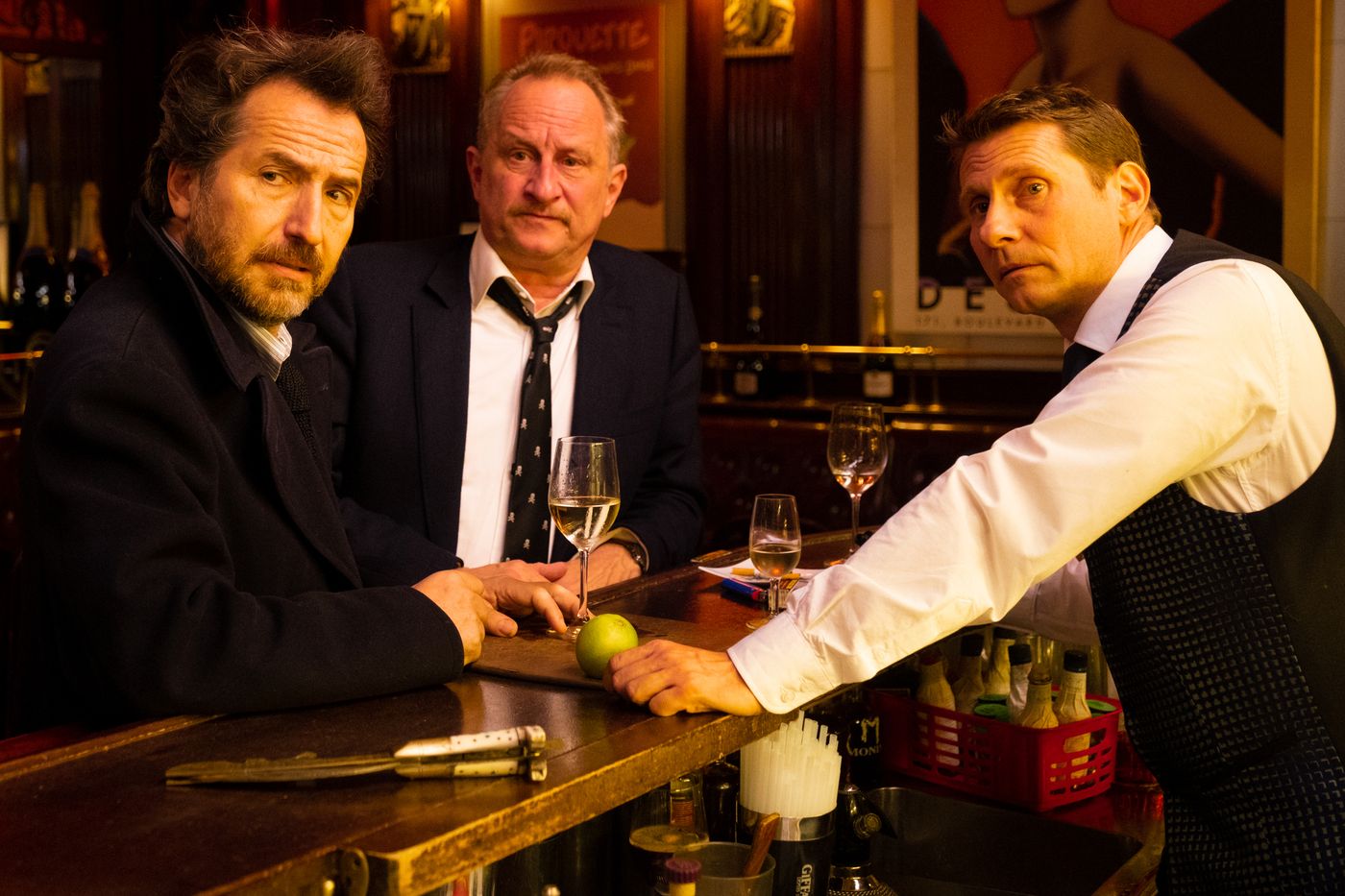 Being invited to attend in a chic restaurant the annual meal of eight friends, “legends of Parisian life”, who make a point of meeting to compare themselves, we were salivating in advance, ready to tie our napkin around neck, fork in hand. And let the party begin ! Just imagine the round table: Pierre Arditi, Jackie Berroyer, Bernard Le Coq, Daniel Prevost, Bernard Murat, Benoît Poelvoorde, François Damiens. With, for host, the late Jean-François Stévenin who has never been as present in the cinema as since his death.

We no longer count his post-mortem appearances. With, also, as an eternal latecomer who is long overdue: Gérard Depardieu. And the flash passage of the master of ceremonies, the puppet show: Édouard Baer himself.

Offshore, a few women, none admitted to this holy of holies of shared virility: Isabelle Nanty, Léa Drucker, Ludivine Sagnier. And a young waitress who turns the heads of these old males (ah, the number of eternal seducer played so well by the elegant Bernard Le Coq).

Suffice to say that, on the slate, the table d’hôtes was not lacking in style. And to know that Édouard Baer was at the piano to simmer dialogues with small onions, we licked our chops, ready to help ourselves. We suspected that this Farewell Paris, whose title sounds like a music-hall show, would give rise to numbers of actors, competing in the histrionics, abandoning themselves without restraint to their cute sin, adding more to amuse the gallery, pulling the cover to oneself, and make his own consideration shine in the eyes of the guests. The semblance of caring for others does not last long. All stick to their principle of life: tell me about me, that’s what interests me.

→ CRITICAL. The sound epic of Édouard Baer in Senegal

Obviously, Jackie Berroyer, lost inhabited by his silences, lives in his world. And, hazed, relegated, pushed back, Benoit Poelvoorde flourishes in the pale role of the guest, cruelly left out, for mysterious reasons, who tries to put on a good face and waits for the “opening”.

This pochtron pochade turns into a squeaky, bittersweet comedy, of “old idiots” who cling to the banister, review the attacks of age, money worries, against a background of noisy ranting, everything by philosophizing on a small scale. The rivalries concealed under the veneer of the pleasure of reunions do not resist the excessive blows which unleash the annealed resentments, the obscure settling of scores whose origin they have even forgotten, the quarrels of grown-up children who are aging badly. They yell at each other so as not to say to each other: we loved each other so much.

Édouard Baer wanted to pay tribute to the Belmondo-Marielle-Rochefort trio who used to spend days around a table to savor until the last glass the pure pleasure of warming friendship. We eagerly awaited him in this exercise in melancholy and gratitude. What happened to this genius of celestial appropriateness, usually so inspired, so surprising, so light, so poetic in his “improvisade” flights?

At the time of the addition, the account is not really there. It drags on, it’s uneven like any meal, with its hollows and its ups and downs, a bit heavy like a banquet that’s too long, the sauce doesn’t really take. Even the good words, which we are so fond of at Édouard Baer, ​​become pasty at times.

One of the springs of this film, a repeated gag, is the grumbling of the guests at not finding the dishes they were expecting on their plate. We are tempted to follow in their footsteps, without wanting to leave the room. We watch them leave with regret. We loved them so much.