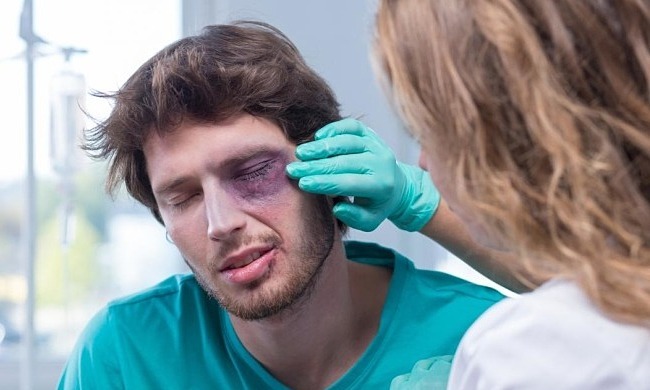 Turning to hug his wife, Mr. Tung was immediately kicked from the bed with the scolding “You are like an animal, don’t touch me”. He quietly hugged the pillow to the sofa.

Recounting this situation, Mr. Nguyen Duc Tung, 35 years old, from Nghe An sighed: “This house has been like hell on earth over the years”.

Previously, he and his wife were builders and small traders. Hang, his wife, is smart, so the family is peaceful. In 2016, the third child was born, life was more difficult, she borrowed to work abroad in Taiwan. Tung stays at home to cook and take the children to school. Big and small expenses are waiting for the money she sends back.

The economy has not seen prosperity, the husband and wife relationship has deteriorated significantly. Hang changed her attitude. She visits home for two weeks every year, but she is not close to her husband. “She told me that she was always stinking, and criticized me for being a parasite so she had to make money,” Tung said.

Back home, with business capital, Ms. Hang opened the largest grocery store in the commune. Tung still takes care of housework, taking children to school and helping his wife import goods and transport. The couple’s sex life was less cold than before, but whenever there was something frustrating, he was embargoed. She quarreled with her mother-in-law, but her husband did not defend him. In the evening, Tung was scolded and kicked out of bed. What is not satisfactory, she glares at her lightly, “kick the basket to touch her”, if she is heavy, she kicks her husband’s back regardless of whether she is at home or at the store. “I work dusty all day and still get compared to other people,” Tung lamented.

“Many cases of men being beaten, rejected, embargoed, blocked by their wives, etc., but with dignity, they do not dare to call out,” delegate Truong Anh Tuan (Nam Dinh) once said in a discussion session of the National Assembly about the issue. gender equality goals, November 2017. “When it comes to gender equality, people often think of women, but forget about men,” said Mr. Tuan.

Sharing the same view, psychologist La Linh Nga, director of the Center for Research in Psychological Science and Education (Hanoi), affirmed that both men and women can be victims of domestic violence. family, although the rate of husbands experiencing violence is lower. “Women are often subjected to both mental and physical abuse, while men are more often subjected to emotional abuse,” Ms. Nga said.

According to a poll of 8,000 American couples over a 10-year period (1975-1985), the rate of women assaulting men was equal to the rate of men being violent with their wives. Elizabeth Bates, a researcher at the University of Cumbria (UK), said that society does not accept that men can also be victims of domestic violence. She warns: “The story of men being abused by their wives is sometimes portrayed on TV or in shows with humorous contexts. We can laugh at women’s violence against men and this inadvertently prevents them. discourage men from seeking help, stemming from a fear that no one will believe them.” In fact, this can cost male victims a great deal.

Unable to share with anyone and not knowing where to seek help, Nguyen Duc (47 years old, from Ho Chi Minh City) always finds it difficult to breathe with married life. Since getting married, whenever husband and wife quarrel, Tu and his wife are ready to “you, me” with her husband. Once, the doctor came home late from work, saw his wife busy looking at the phone without food, so he got angry. With a fruit knife at the table, Tu Phi went to the door to face her husband. Fortunately, Duc avoided it.

For four years now, he has stiff knees, difficulty walking. Sometimes his wife calls to pick up the children, but he is afraid of unsafe roads, so he refuses. Tu far away scolded in the phone “no more husband like you”.

“I’m in pain because when I’m sick, my wife doesn’t share, but kills and looks down on me,” he said bitterly. Since her husband was sick, she left early and returned late so that she would not have to eat on the same tray as him. At night, she went to sleep with her children, leaving her husband alone.

In a survey conducted in two years 2018 -2019, with more than 2,500 men aged 18-64 of the Institute for Social Research and Development (ISDS), the rate of wife abuse was about 4%, equal to half the rate of husband violence against his wife. However, men at the youngest ages (18-29) experienced the lowest rates of domestic violence among the age groups. Even in this group, the percentage of wives who use physical violence is almost twice that of husbands (6.2% versus 3.5%).

Nguyen Duc Tung has had to take sleeping pills or drink alcohol many times to sleep. “No career, no money, being looked down on by my wife and children is very tiring. I used to have the good thought of pouring all the sleeping pills in the box into my mouth to end it all,” he said.

Like Tung, a quarter of men in ISDS’s survey admitted to feeling pressured in life. In which, more than 80% of financial pressure and 70% of career pressure.

Speaker and journalist Hoang Anh Tu said that many men who are abused by their wives often relieve themselves with alcohol or abuse their own wives and children. This creates a vicious circle, a deadlock.

Mr. Tran Van Hung, 41 years old, from Thanh Hoa is often consulted by the local women’s association for abusing his wife and daughter. The last time the officer came to his house, Mr. Hung said: “I promise to beat my wife less. But the sisters said it was less too much for me to breathe”.

As a mechanic, Hung often has to work overtime until midnight. There are days when he works 14 hours, but every time he comes home, Huong, his wife blames him “for being illiterate, why can’t you teach Ty to study”, “you can’t sweep the house with your crippled hands”… Just cleaning up, She just cursed at her children, but hinted at her husband “practice housework or tomorrow his wife will put her skirt on her head”. Frustrated, when he was drunk, Hung retaliated by grabbing his wife’s hair and slapping her ears.

To change this situation, speaker Hoang Anh Tu said that society and men themselves should remove gender stereotypes and take an objective view of domestic violence. “The story of men experiencing domestic violence is a reality that requires society to solve, not a story about online likes to laugh and mock,” Mr. Tu said.

According to Ms. Linh Nga, instead of hiding and being ashamed of being a victim of domestic violence, men should confide in close people such as parents, siblings-in-law, mutual friends of two people, in order to solve the problem. release stress and possibly through their influence.

After a long stalemate in his marriage, Mr. Tung thought of going to Hanoi to work. But busy shop work, small children, wife won’t let him go.

“She told me that I wanted to break up and have sex with someone else. I would file for divorce,” he said. I love my child, but I think it’s time to free myself.