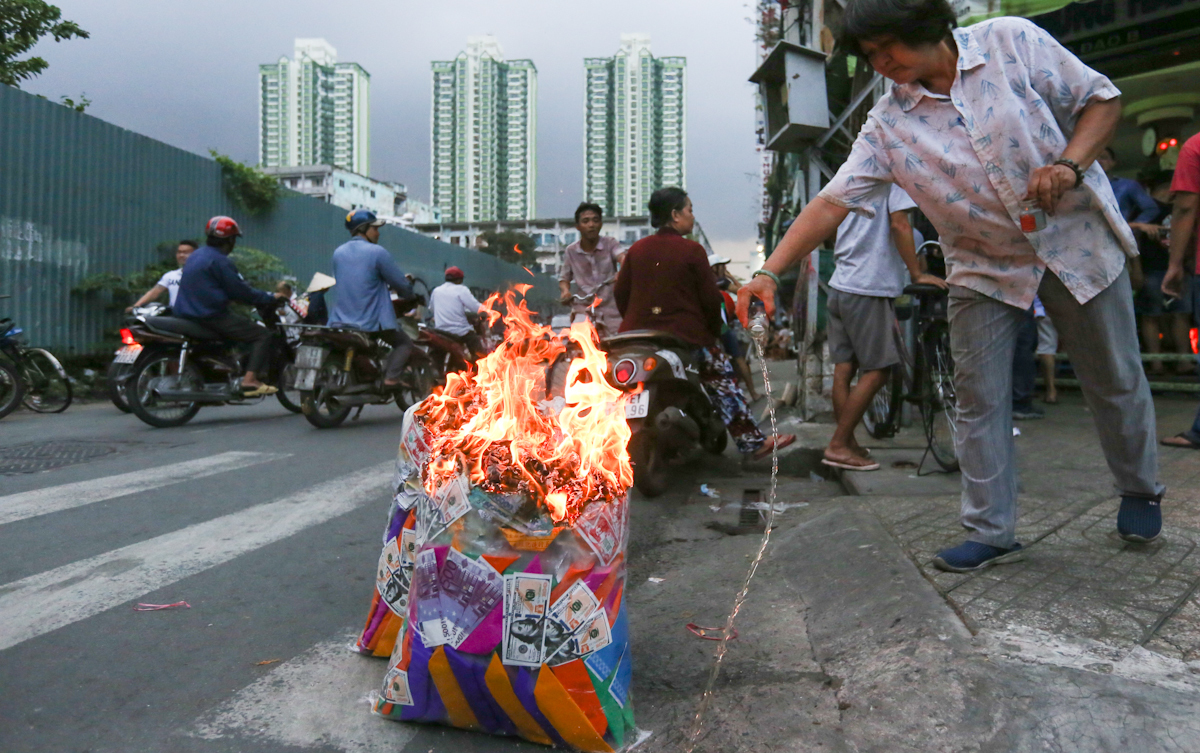 The bell rang for his wife’s phone, Trung immediately dialed refuse. Only 5 minutes, he ignored dozens of such calls because he knew what his wife called.

“From the beginning of the lunar month of July, she forced me to go home before 6 p.m. with the excuse that the ghost month was limited to going out at night. Going to receive guests, how could I follow my wife’s wishes,” said the 40-year-old man, head of the department. running a mechanical company in Hanoi, explaining his wife’s certain actions not to answer the phone.

From the beginning of the month, Hai Yen (Trung’s wife) gave her husband a list of things to abstain from in the 7th lunar month. She convinced him that this year he was promoted to head of the department, and abstinence worship was the right thing to do.

The list Yen gave includes a series of things not to do such as: Do not wear black clothes, do not go out late at night, do not fish, do not lean against the wall in the shade, do not sing at night, do not move house… The wife said she learned this from her business friend for many years in China. “Thanks to knowing the taboo, my friend is successful, you should also follow,” she told her husband.

After only a few days of implementation, Trung felt miserable because of the constraints. He has to go home before 6 pm, all arising things such as receptions, meetings… are done during the day or moved to next month. Yen explained, July is the month of ghosts, the evening is the time when the negative energy is at its peak, also when the devil likes to travel, going out only to bring disaster. Two days ago because of work to go abroad, Trung drove past the cemetery at dusk. Yen knew that she should prepare grapefruit peel and locusts to burn her husband’s ass right from the gate to prevent “the devil following her home”.

Previously, Trung had a habit of going fishing on weekends, but this hobby was also banned by his wife during the month. “The bottom of the water is a hiding place for living beings, fishing for fear of disturbing their peace,” Yen said and further explained that the ghost month should not kill. It makes sense, Trung stayed at home, but when his wife banned him from singing in the shower, he couldn’t stand it anymore. Yen explained, singing in the month of ghosts, especially in the evening, will draw attention to wandering spirits. Before the unreasonable prohibition of his wife, the two had an argument.

In fact, people who abstain from the month of solitude like Trung and his wife are not rare. The types of taboos are very different, depending on the concept of each region, but there are some similar taboos such as stopping buying high-value assets (cars, motorbikes, real estate), not getting married, not starting a business. new business…

The most obvious manifestation of the ghost month is that the auto and real estate markets are often sluggish. For example, in 2021, car consumption in Vietnam in August, July of the lunar calendar, decreased sharply. According to a report from the Vietnam Automobile Manufacturers Association (VAMA), car sales in the month decreased by 32% compared to the previous month. A representative of a real estate brokerage floor in Hanoi also said that usually in the seventh lunar month, the number of transactions decreases by 70-80%.

Ms. Tran Huyen Trang, director of an event-wedding company (Hoang Cau, Hanoi) said, for nearly 10 years, the company has not received any orders to organize a wedding in the 7th lunar month. “Like last June, we held about 20 wedding parties, in July there were only 1-2, all of which were intimate introduction parties of foreigners”, Ms. Trang shared.

According to cultural researcher Pham Dinh Hai, the Vietnam Union of Friendship Organizations, the lunar July is not a lonely month as many people think. “In the calendar, theology, mysticism and folk traditions, no one calls July the month of ghosts,” the expert affirmed.

In the 7th lunar month, there are three popular festivals according to the concept of Taoism (forgiveness of the dead), Buddhism (Vu Lan Ben) and Than Sac (Tet Trung Nguyen). These festivals are held on the full moon day of July.

According to Taoism, the full moon of the 7th month is the day of Hell’s great amnesty (pardoning the dead), allowing all spirits, including those imprisoned in hell, to return home with their descendants for one day. So on this occasion, families make offerings, burn votive papers for their ancestors, and limit going out on this day to “make way for the spirits”.

Vu Lan festival of Buddhism originates from the legend of Bodhisattva Muc Kien Lien saving his mother from the life of hungry ghosts (no refuge), so it is also called the “Vu Lan repaying filial piety” ceremony. During the Vu Lan festival, there is a ritual of “giving food”, the pagodas use white porridge to give alms to the unjust souls, ghosts, hungry ghosts, etc. The pagoda cooks porridge, scoops out the banyan leaves, adds rice, salt…; Light candles, chant sutras, recite mantras so that the ghosts and ghosts can eat and drink enough to escape.

“Therefore, the taboos in the 7th lunar month are unfounded,” said Mr. Hai.

According to Mr. Vy, in Eastern folk experience, people often refer to “spring birth – summer growth – autumn fall – winter storage” (spring is the breeding season, summer is growing, autumn is retracting, the season is short. hidden, contained). That is the general operating law of life in nature. For thousands of years, people have recognized this law and soon knew how to apply it to get the best effect in production as well as in life.

“Collecting” – entering autumn – is the beginning of the process of shrinking, collecting and capturing life energy after the development of the “lower” to enter the “winter”. Because July begins autumn, which is also the rainy season, the ancients had the mentality of keeping the excess into taboo customs. For example, the custom of not drying clothes at night was recorded in some ancient documents in the V-VI centuries, stemming from the humid climate of July in the South, cold at night, and clothes are prone to mold and diseases. . That custom is still kept as a preventive measure. Avoid building a new house or getting married… also partly affected by the rainy weather.

“Folks often live by experience in order to satisfy the psychology towards the safety of individuals and the community. But anything excessive is also inadequate,” Mr. Vy said.

Because she wants to live a safe life for herself and her family, Van Ly (Phuc Tho, Hanoi) also sets a series of taboos in July such as husband and wife not to call each other’s names, not to cut their hair… with the psychological avoid bad luck, “there is worship, there is good, there is abstinence”.

Taboo is one thing, looking forward to God’s blessing on business, the owner of the furniture shop also spends a whole month worshiping and praying. Ly said, although the work is still difficult, but still have to try to make the full moon festival in July. “Hopefully the people of the underworld understand the sincerity and bless the good work,” she said.

To take care of a decent ceremony, more complete than people, Ly spent tens of millions of dong to buy a lot of votive paper with the mind of “the ceiling is so negative”. She buys in large quantities from houses, supercars, phones, even service stations…, she has to hire two trucks to bring it back. The 42-year-old woman calculated that before the full moon, she had to invite the teacher to worship a big ceremony.

According to Mr. Pham Dinh Hai, if the rich people make big sacrifices and get great fortune, the rich “win all” of the poor. Worshiping must be sincere, that is, really remember, mourn, pray for the souls to be at peace and escape. Expert Nguyen Hung Vy affirmed that votive paper is only a symbol of the dead, for the soul. As a symbol, the mind is more important than the property.

The researcher shared, buying a lot of votive paper, that is “inferring my belly into a human belly”, the desire itself should think that the soul also desires, that is greed. Seeing people buy a lot, I want to buy more to be proud of others, that is anger. Not understanding the symbolic meaning of the problem, but acting in a race is entangled in delusion.

“Greed – Anger – Si is the cause of all suffering in the world. So how can you save the soul and even save yourself,” he affirmed.

Mr. Vy advises, it is best to understand the situation yourself and actively behave in accordance with your own circumstances. After all, no matter where the ceremony is performed, the most important thing is sincerity. People often do good deeds, help others, no matter what the circumstances, they themselves feel at peace.