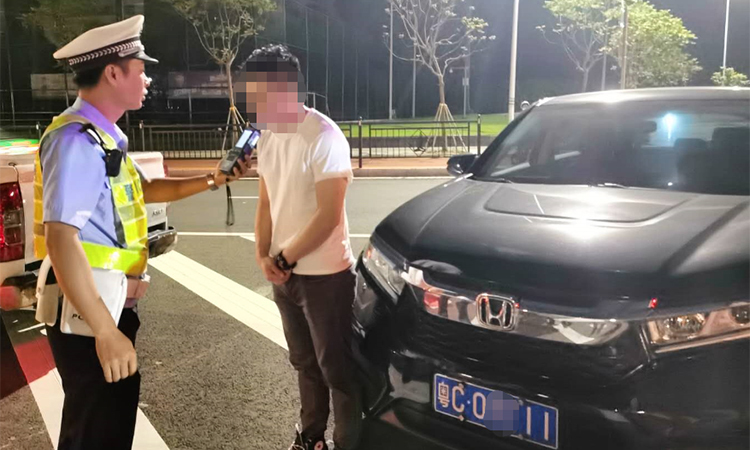 ChinaWhen the police stopped the car, checked the alcohol concentration, the man surnamed Mac pretended to go to the toilet and ran away, leaving his girlfriend idle.

At 3 am on October 7, the police of Zhuhai city, Guangdong province discovered a car moving abnormally, sometimes stopping suddenly, sometimes turning around without a direction. When checking, on the car are both men and women with signs of drunkenness.

This couple is a lover. When he took them out to the car to check the alcohol content, the 31-year-old Mac man walking in the back whispered to the police: “She has been drinking. The girlfriend walking in the back did not know what Mac said, constantly affirming: “My boyfriend does not drink, he is very alert”.

When the results showed that both of them had excess blood alcohol levels in the driving range, Mac still blamed his girlfriend. After a while, the man said that he had to go to the toilet and then ran away when everyone wasn’t looking.

After running for a while, Mac got caught in his shoes, so he removed his barefoot running shoes and turned into a dark alley. Seeing the police chasing, panicking, he stumbled into a flowerpot on the side of the road and fell on the ground. “I got punctured by debris,” the man shouted and lay motionless. When taken to the hospital, doctors diagnosed Mac only injured skin, no internal damage.

While her boyfriend was hospitalized, Mac’s girlfriend was still waiting at the scene. When she heard the police say that her boyfriend blamed her lover for being the driver, the girl felt pain. “I did not expect my boyfriend to be like that.” At the end of this year, it is expected that the two will hold a wedding ceremony after 2 years of love.

Many people who heard the story advised the girl to give up her marriage with Mac. “Leaving a girlfriend in difficult times, it is not acceptable,” said one person. While others shared their opinion: “Men really show their nature when they are drunk”.