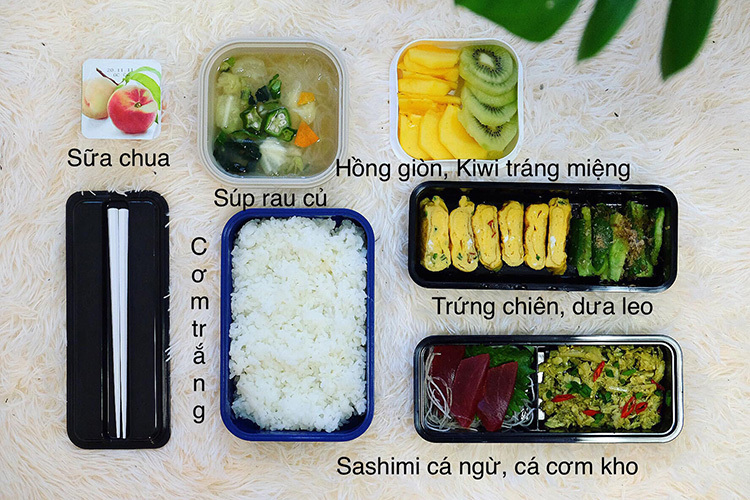 JapanOver the past two years, Nhan spent at least an hour a day cooking bentos and taking them to work at night.

Le Duc Nhan is from Binh Dinh, currently working at a hotel in Gunma province, Japan. When he came to Japan in 2015, despite studying and working part-time, he slept for 3-4 hours a day, but Nhan still went to the market, cooked rice, and rarely ate food.

In the last two years, when he became the deputy manager of the hotel’s restaurant department, he often brought home-cooked bento to work. “It is also a way to save costs compared to buying rice at the supermarket”, the 28-year-old boy shared.

Due to the shift work, Nhan’s noon usually has a long break. Every day, he spends 60-90 minutes preparing his bento box. During the week, menus are available, each time Nhan’s market goes to make notes in a notebook to avoid the same dish on the next day. This helps him not buy excess food, avoid incurring market money and save time.

The Vietnamese boy’s menu is mostly familiar dishes such as: Beef roll with betel leaves, fried eggs, snakehead fish with pepper …, sometimes changed to Japanese dishes like salmon or tuna. Adding these two types of fish, the cost of a meal is usually 150,000-200,000 VND, if only eggs and meat ranges from 50-100,000 VND. Compared to buying at a supermarket, the price is cheaper and the amount of food is also higher.

The salty dish is done first by Nhan, while waiting for the food to be cooked, he will pick up, wash the vegetables and then cook the second dish. Green vegetables, salad are always priority on the menu because Nhan does not like dishes with a lot of grease. After finishing the dish, it is allowed to cool and then put into the box to avoid steaming and losing flavor. Time to eat, just put in the microwave for a few minutes to enjoy.

Being a fan of fruit, Nhan’s bento always has fresh seasonal fruit. He usually spends 5-10 minutes peeling fruit available at home with his favorites like kiwi, pineapple, and oranges.

In the early days of bringing bento to the company, Japanese colleagues exclaimed “Sugoi” (delicious) and asked to taste it. When he was “enamored” of Vietnamese food, Nhan was willing to prepare separate bento boxes for them if requested. The Vietnamese boy’s bento box is also more numerous than others to “deduct” the fact that colleagues try to eat and still have enough stomach.

“I cook these bento, in addition to ensuring health, I also hope that one day a family will become a man to help wife in the main kitchen,” the single man shared his cooking purpose.

The beautiful bento boxes made for themselves when being shared in a culinary group, Nhan was called happily by many as “the national husband”. However, this guy said, he lost his parents at the age of 11 after a traffic accident but still aches about his mother’s cooking. “It is just boiled vegetables, fish stock … but it is a beautiful memory that cannot be faded, even after eating many delicious dishes at a high-class hotel”, Nhan said.

Therefore, the boy’s cooking for himself with 3 meals a day is to encourage himself to live well and live well so that his parents will not worry anymore.

Years later, when he was adopted by his aunt and then living in a child protection center in Binh Duong province, Nhan also regularly stood in the kitchen to cook for many people. “The meal was always filled with laughter and joy”, the young man understood that cooking not only ensures health, but also shares love.

Nhan also said that he likes to create joy for himself through cooking and always wants to share positive things with everyone. In the future, he will learn more about other cooking styles within his ability.