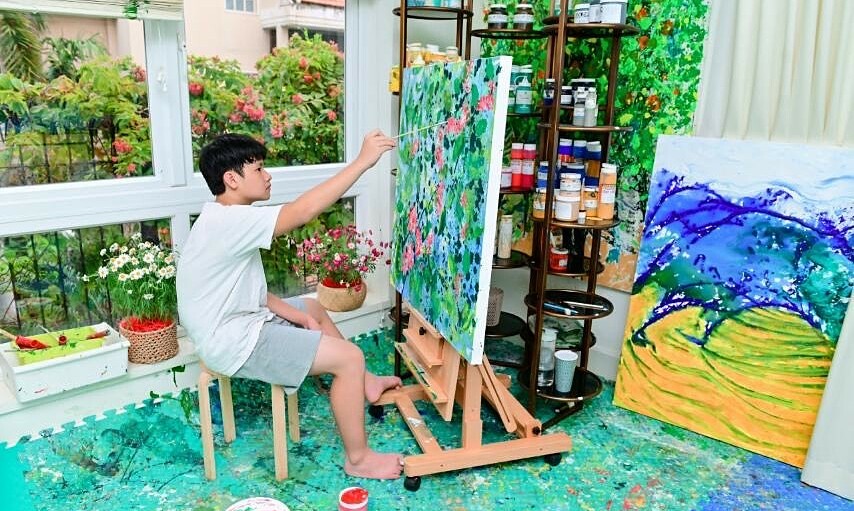 HCMCFour years old, Xeo Chu’s artistic talent revealed. By the age of 12, the boy was likened to the artist Jackson Pollock, with paintings that cost hundreds of thousands of dollars.

One morning in December 2020, Xeo Chu and his family were having breakfast in front of a hotel in SoHo, New York, when everyone around noticed them and pointed the screen behind. On it, Fox News channel is introducing a Vietnamese child artist and his personal exhibition “The Big World, Small Eyes” is performing at George Berges Gallery. At the same time, the American press also continuously put the name Xeo Chu on the homepage.

The exhibition displays eight paintings painted by Chu, including five of Ha Long Bay. A special feature is the picture “Cave of Ha Long Bay” with a size of 2.4 mx 6 m – 20 times more than a boy’s body, valued at 150,000 USD. This is a record price for a child painter, even famous artists also aspire.

A Reuters correspondent interviewed Xeo Chu also revealed marginally that “Chu’s paintings invited him and his wife to Vietnam”. Since this exhibition, the name of Xeo Chu has become world famous and has been considered a “painting prodigy”.

Born in a family with a long-standing gallery in Saigon, Xeo Chu’s passion (real name Pho Van An) was revealed very early. When he was four years old, every time he had to get in the car to learn English, the boy “cried” while his brothers were allowed to learn to draw. The mother had to give the eraser, the paper, in her heart just wanted her child to “scrawl quickly” to go to class.

The boy with chubby cheeks can draw anywhere and anytime. Once off school, young Chu was allowed to go to his drawing class to “play with colors”. Everyone in the drawing room has a teacher beside him to guide him, while Chu can’t draw … his face. The teacher passed by, immediately impressed by the picture of a face that looked “very artistic” and added more drawing. This time I draw the shadow of the two of you.

Observing the boy for a while, the teacher silently pulled Xeo Chu’s mother to a corner, saying: “Over 10 years of painting, the first time I saw a 4-year-old child draw like that. Palm lines fly, firm like a true artist “.

Her mother, owner of two art galleries over 20 years old, was startled to look at the two paintings. She recognized what the teacher said. “All night I was sleepy, loving my children and happy,” said Nguyen Thi Thu Suong. Later that day, Xeo Chu was officially drawn.

In the early years, the world through the boy’s eyes was what he saw every day, such as a trellis of bitter melon in front of the house, a flap of sunshine slanting through the doorway, a frame of historical flowers by the window and especially a lot of flowers. Once an acquaintance gave her mother 30 peony flowers. Beautiful flowers are expensive, Ms. Suong regrets not going to work for 3 days to stay at home to watch. Chu saw that silently hugging the vase to the drawing room. Just been a few steps away. So scared, the boy immediately asked for help. After this incident, Zhou learned to draw from pictures. “I drew three three-color pictures to prevent my mother from wilting anymore,” the boy said.

Little Xeo Chu also participates in volunteer activities with his mother. I volunteered to draw pictures to have money to pay tuition for a friend “same age and fat as me”. At the age of 10, Chu had his first painting exhibition in Singapore. Many people asked to buy pictures. With the amount of 20,000 USD from the sale of paintings in the exhibition, Chu helped the heart surgery fund, the elderly living alone in District 8 and Saigon street children.

Also from this exhibition, Xeo Chu’s talent caught the attention of George Berges, the owner of an American gallery. This person offered to open an exhibition of my paintings. The 11-year-old boy chose to paint Ha Long Bay. “Then I asked him how he drew such a big picture. I didn’t say Ha Long was beautiful, but said ‘Ha Long is so big’. In my mind, I was completely overwhelmed by the grandeur when I came here. “, Ms. Suong said.

To draw a picture of 2.4 x 6 m, Xeo Chu spent three consecutive months in the evenings and on weekends. When I sit, lie down, crawl to draw. Many days I drew for 5 hours, my hands and feet were exhausted. Until the picture is completed, it is both big, beautiful, and ghostly and impressive. Because of the boy’s hard work, as well as thinking maybe this is a “unique” picture, the family decided not to sell.

Up to now, Chu has drawn more than 300 paintings, making his mark through three individual exhibitions. Her paintings are usually only sold in exhibitions and according to family commitments, all proceeds will be used for charity, until the age of 18 Xeo Chu will decide on his own.

Besides drawing, the 13-year-old boy loves all kinds of other things. Just last year, I liked football so much that before I went to bed I told the story of how to kick the ball, and dreamed at night, I shot her in the face. This year he likes table tennis. In addition to studying at school, Zhou also learned Chinese, piano, and sang … so he usually drew only on weekends.

Artist Nguyen Hai Anh, the painting teacher of Xeo Chu said, the pupil sees drawing as a diary to record what he sees, not being bound by any school or rule. “Exuding in each picture is a source of fresh energy, viewers are fascinated by the honesty of Chu”, said painter Hai Anh.

Also because of this freshness and innocence, many people “lined up” to buy boy pictures. An American overseas Vietnamese who owns one of four paintings sold in the Ha Long Bay set changed his villa’s name to “Ha Long – Xeo Chu”.

Ms. Karlene Davis – New Zealand Consul General in Ho Chi Minh City – a fan of Xeo Chu paintings shared: “I bought Chu’s paintings because I admire the boy’s devotion and passion in sharing his world view. I love the way Chu shows light and color. He sees more than the naked eye and shows the spirit of the picture. They are so delicate. “

At the end of this year, Xeo Chu was still drunk with a paintbrush. He is editing about a dozen pictures of Mu Cang Chai after his trip here in September. There is a Chu painting of endless ripe rice fields, a painting of a vast horizon or a fellow celebrating new rice After the epidemic ends, Xeo Chu will bring Mu Cang Chai to the world.

Donate money to help a Russian man in trouble in Vietnam