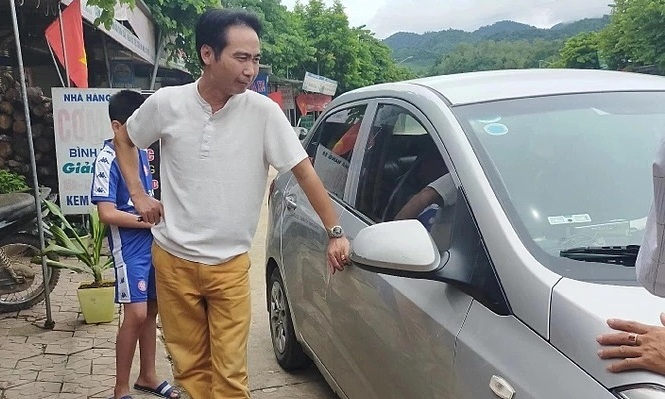 Dien BienAs soon as he learned that Mr. Hung had been stolen for a car ride of 6 million VND, many people offered to give money and introduce guests to Hanoi, on the afternoon of September 4.

Mr. Ha Duc Hung, 54 years old, a taxi driver in Son Tay town (Hanoi), said, around 9pm on September 3, he received a notice from the switchboard to pick up guests at the Temple of Literature in Son Tay. The guest is a man over 20 years old, holding a small bag in his hand, claiming to be a Mong ethnic who is not fluent in Kinh language, wants to rent a car to Muong Cha district, Dien Bien province because his family has urgent business.

“I initially refused, suggesting to take him to the bus station because I have never gone to Dien Bien for more than 500 km. But he said in a pleading voice, feeling sorry for him, so I risked agreeing,” Mr. Hung said. speak.

Calculating the cost of gas according to the listed price, Mr. Hung reported that the trip would cost 6 million VND, not including tolls. The guest agreed but said only 4 million VND left, promised to return home to ask the family to pay the rest. The two set off in the night.

Expected to arrive at 8 am the next morning, but the road is winding and hilly, many bends in the sleeve, the driver is not familiar, so at 12 noon 4/9 the new taxi arrived at Muong Cha market, Muong Cha district.

When the driver stopped answering the phone, the young man offered to let him go to the toilet. After waiting for more than 10 minutes, the customer did not return. Hung, feeling that something was wrong, ran into the small entrance between the two kiosks in the direction the customer had just entered, only to find that behind was a wild forest, without a shadow. People. At this time, he knew that he had been cheated and lost his 6 million dong car.

Knowing the story, many people around the area of ​​Muong Cha market volunteered to help the man in Hanoi, split up to search everywhere for an hour but could not find any trace of the customer who rented the car. “Because I trust people too much, I don’t ask for a deposit. In the middle of the vast mountains, I know where to find it,” he sighed.

Loving the driver who lost a large amount of money, the people around brought drinking water and food to donate. He thanked and drove back to Hanoi.

The story of a Hanoi taxi driver being cheated by customers was witnessed and shared on social networks by a Muong Cha resident.

Nguyen Van Hai, 28 years old, a member of the Dien Bien Taxi Association, happened to read the post online. With more than 10 years of driving experience, having been in similar situations many times, Mr. Hai felt the difficulties and frustrations of the Hanoi man, so he and his colleagues found a way to contact Mr. support.

In just a few minutes, the drivers had contributed nearly enough money of 6 million and sent Mr. Hai and another person to run into Muong Cha district. On the way in, seeing a four-seat car on the Hanoi beach running in the opposite direction, the Dien Bien taxi driver signaled for the car to pull over to the side of the road and asked about it.

After verifying it was true that the driver had just been stolen, Hai offered to donate the money people had just donated to make the toll road back to Hanoi, but Hung just said thank you and asked for no help.

“He said it happened because he was not alert. At that time, he still had enough money to return to Hanoi, so he refused the money,” said driver Nguyen Van Hai.

At the same time, many phone numbers of Dien Bien people also called Hung to ask for an account number to send money for gas, but he did not accept it.

“Thank you and your relatives for your care and affection. Your kindness I will never forget, I hope to have the opportunity to welcome you in Hanoi”, Mr. Hung said before getting into the car.

Before returning, Mr. Hai’s group sent the phone numbers of some guests in Son La and Moc Chau who wanted to go to Hanoi so that if possible, Mr. Hung could carry and partially compensate for the gas money spent. But not familiar with the way to pick up and drop off passengers, the 54-year-old male driver did not dare to contact. At 10 am on September 5, Mr. Hung returned to Hanoi.

“This is an expensive lesson for me because I trust people too much, let my family and friends worry. But the surprise that touched me the most was the love from strangers who were willing to help me in difficult times.” Hung confided.