(Sports news) The fact that 2 athletes cheated their achievements to help one person win the championship, newly discovered at the 2021 National Marathon Pioneering Tournament, created a strong wave of public opinion at major Marathon forums. of Vietnam.

After receiving many reflections from the athletes competing at a distance of 21km of the movement about the cheating behavior of female champion Ngo My Lien, carefully reviewing many documents, the organizers (BTC) of the Tien Phong Marathon country 2021 has come to the conclusion:

Athlete Ngo My Lien, bearing the number BIB 81896, played dishonestly, seriously violating the rules and regulations of the tournament when giving his BIB to a male athlete to compete for the first place at the age of 45 years or older. at a distance of 21km female movement.

Player Le Duc Ke, bearing the number BIB 80744, played dishonestly, seriously violated the rules and regulations of the tournament when he brought the BIB of athlete Ngo My Lien to play, abetting the cheating behavior in sports competition. by athlete Ngo My Lien.

The story of two athletes Ngo My Lien and Le Duc Ke receiving a permanent ban on competition after the above cheating act has “stirred up” the Marathon communities in Vietnam.

Sharing on the forum Running Community (R4S) with more than 37,000 members, famous runner Nguyen Tien Dat, also the administrator of this forum, wrote: “I have doubts, I do not understand why a top athlete like 81896 (bib number of athlete Ngo My Lien) has very few photos (only a few photos at the destination), even though the number of bibpix photographers on the street is like heaven and earth, and the ant is also difficult to pass ” .

“But don’t think the scenario is correct. Don’t want to have to see a movement run through gray prisms. This is probably a historic milestone, the first time a tournament organizers have run wildly to say no to cheating. Permanently forbid cheating athletes from attending the following tournaments ”.

Nguyen Tien Dat is the first Vietnamese to complete the marathon (42,195 km) with a time of 6 hours 22 minutes 11 seconds on the rooftop of an apartment building in Hanoi. In addition to being a record-keeping runnern, he is also a commentator and prestigious writer in the country’s athletics village.

Meanwhile, Mr. Pham Thuc Truong Luong (admin of LDR’s Association who likes to run long-distance runs with more than 21,000 members) shared: “Sports regardless of the subject, honesty, fair play and noble spirit are highly valued. in competition. Cheating can bring good rankings, but it is not a good performance in the sense of being faster, higher, farther out of the sport “

“I believe the runner community all agree with the decision of the organizers of the Tien Phong Marathon for the cheating of the two above athletes. Cheating at this level should not be tolerated or ignored. I believe through this incident. The whole running community has its lessons in honest competition ”.

“There are no prizes or rankings that are worth the respect of the community and no victory is as sweet as winning yourself”, the rare Vietnamese runner has completed the full distance from 10 km to 100 km Vietnam Mountain Marathon, Vietnam’s largest trail running for 7 consecutive seasons, rated.

On the other hand, the representative of Quy Nhon Morning Run – QMR (known as the association that two cheating athletes are participating) posted and shared their apologies on the forums.

According to the QMR representative, the association does not support and advocate for unsportsmanlike behavior but is responsible when it is unable to control individual actions and decisions in the association, so apologize to the runner community. in all parts of the country, as well as the organizers of the Tien Phong Marathon.

In addition, the association expressed the hope that everyone has a tolerant view of individuals making mistakes as well as sharing problems in a positive way. QMR’s apology then received positive and sympathetic feedback from the runner community across the country. 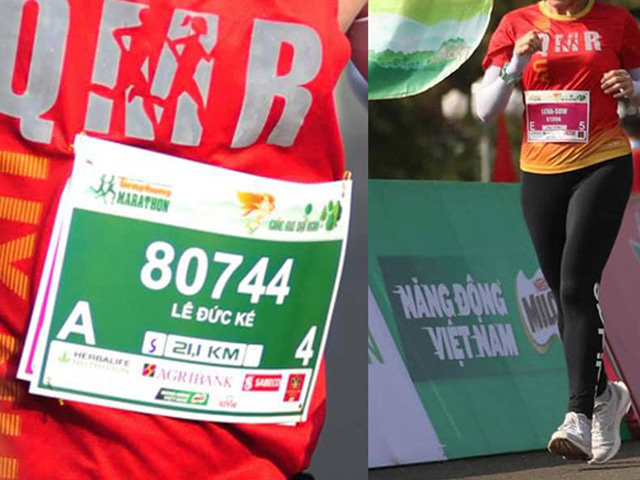 (Sports news) Two athletes Ngo My Lien and Le Duc Ke have been permanently banned, stripped of the title after having misconduct …