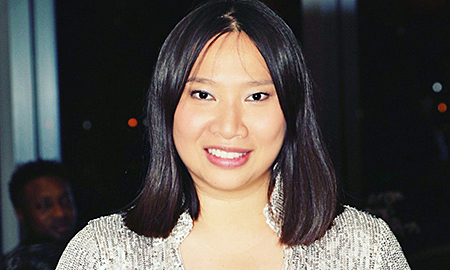 Older brotherAt the age of 19, Iola moved from France to England alone, dreaming of becoming an artist with a diary written on the front page: ‘Don’t give up, because I’m Vietnamese’.

When she arrived in the UK, Iola applied to babysit, but within three months she was fired from her job. With only 100 pounds left in her pocket, the French-Vietnamese girl had to rent a dormitory room with 8 people living together. In that cheap room, the window was broken. In the winter, sitting indoors still had to wear a coat wrapped in a blanket to prevent frostbite. After a week, thieves broke in and stole everything, Iola officially empty-handed in a foreign land.

“At that time, I was shocked. But I was tired of crying and then sat up again, reminding myself of the main purpose of coming to England to do,” Iola recalls what happened to her in 2010. Friends know what happened, blame her for being alive. affluent in France, why go to the land of the mortuary. “I have to be successful and I believe it because I have resilient Vietnamese blood in me,” the girl replied to you.

Iola Dilaw’s Vietnamese name is Nguyen Kim Nga, born in 1991, in District 9, Ho Chi Minh City. She has a twin sister but was separated when she was just one year old. Because her biological parents were too poor, Kim Nga was sent to an orphanage. Half a year later, she was adopted by a couple of French teachers in the district of Perpignan, in the province of Pyrénées-Orientales.

From an early age, Iola knew that she was not a biological child because her adoptive parents did not hide anything from her about the person who gave birth to her. They kept all the paperwork related to the adoption, the photos from Iola’s time at the orphanage in a box. “Thanks to that, I always remember where I was born,” she said.

Overcoming skepticism and grief over the reason for being abandoned, Iola relieved herself with self-explanatory words “because I’m too poor, I don’t want to do that either”. From a young age, she wished to return to Vietnam, to meet her mother to say thank you for giving her life. “I never blamed my mother for abandoning me, because life has circumstances that cannot be helped,” she said.

Iola sympathizes with her birth parents, but the children in town do not sympathize with the color of her skin and face. The girl was bullied, was blocked several times in the middle of the road and threatened to beat her, so she lived a secluded life with little communication, taking piano lessons, singing and dancing into joy. Iola is also very interested in learning English with the dream of going abroad, becoming a multi-talented artist.

Graduating from high school, Iola attended a language university for a year but dropped out at the end of the school year. She wanted to go to England to pursue her artistic dream, but was strongly opposed by her adoptive mother. “You won’t get a dime if you decide to follow that path,” her adoptive mother told her son when she went to England alone.

No money, no relationship, after the first days of babysitting and sharing a room with 8 people, whose belongings were stolen, Iola was accepted into an Indian film crew. The role of a dancer had no lines but was enough to make her happy to forget eating and sleeping. Every day, she worked in the group, had free meals, and slept on the floor of an actress in the group at night.

Also from this time, she took the stage name Iola Nguyen, according to her original surname. “I aspire to succeed to honor my roots. It’s great to see my name, people already know I’m Vietnamese,” Iola shared.

Staying with a colleague for two months, because she didn’t want to be bothered for long, Iola asked to move out to live with another actress. Due to a problem, she left again, living hard in the park. Many times the young girl was solicited by men, so she always had pepper spray in her pocket. Later, Iola was allowed to stay by a vicar. The income from her career as an actress and freelance model gradually improved, she left the parish priest’s house, renting a small room. But the second time, the thief stole everything, just moved in a few days.

This theft is like a drop of water. The warmth and shame suddenly overflowed. Iola decided to return to France to earn enough money before returning to London. That was 2013.

After two years working in France, she decided to return to the UK with 3,000 euros in savings. She does all kinds of jobs from actress, photographer, to personal assistant…Every day Iola wakes up at 4am and comes home at 10pm. At night, she spends time composing music and editing movies, editing photos and videos for clients.

“Despite living hard in London, I have never seen Iola complain. Every time the sisters talk, the energetic girl talks about her art projects,” said Hien Do Benoit, Iola’s sister-in-law. , who watched the growth of the Vietnamese-born girl shared.

After 6 years of frantic work, in 2017, Iola had enough money to make a comedy sitcom, which she directed, produced, and starred in. From this film, she caught the eye of an actor who specializes in casting actors in the UK. Currently, the Vietnamese-born girl has appeared in 11 films. Recently, the short film “The Dormant Truth” directed by her was sent to attend the 2022 Cannes Film Festival.

Not only passionate about movies, aiming to be a multi-talented artist, in 2019, Iola also self-produced music videos. Some works are used in American television series, as well as receive many other awards. Iola is currently one of 6 shortlisted candidates for the final selection of the AWA (Asian Achievement Women) Awards in the “Arts and Culture” category in the UK in 2022.

In the past, Iola was often embarrassed by her skin color and body shape. But now, she understood, difference was sometimes an advantage. “I’m always proud of myself, my Vietnamese hair, eyes and smile,” the girl affirmed.

When she was a child, every time her birthday came, Iola thought about her biological mother. She longs to see the person who gave birth to her again. In 2015, Iola first returned to Vietnam to visit her mother’s family. When she met her, she wanted to ask her how she was doing, if she was happy to see her, but she could only utter two words “Mom” – all Vietnamese at that time – and then sat down and cried.

Mrs. Nguyen Thi Bay, 63 years old, Iola’s biological mother, does not know a broken French word. Iola, who has lived in France for decades, cannot understand a single sentence of Vietnamese. They talked through the interpreter, told each other about the torment, about the pain experienced after 24 years of separation.

“She is very simple, I lie on the ground and she hugs me. My mother and I do not speak languages, but when I look into each other’s eyes, I understand what she wants to say”, Ms. Bay shared. As for Iola, meeting her biological mother again, she finds herself very similar to her, from her face, body, to her sense of humor and strength. In 2018, for the second time, she returned to Vietnam to visit her mother for a month with her adoptive father.

At the end of next year, Iola plans to return to her hometown to visit her family again. The young girl has planned to develop a business in Vietnam, being close to her family and creating jobs for her siblings.

But that is for the future. Currently, the 31-year-old girl is taking a Vietnamese language course in the hope that the next time she visits her mother, she will be able to understand what she is saying.