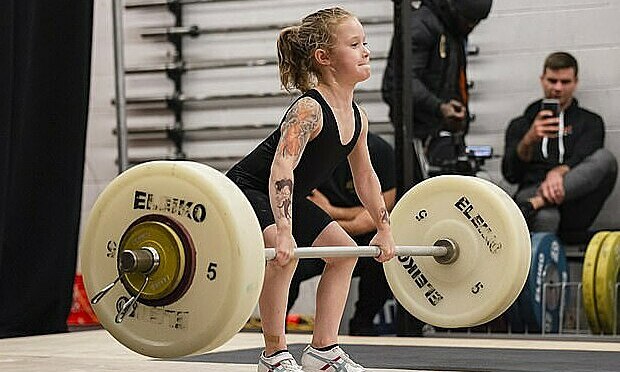 Starting at the age of five, Rory van Ulft of Ottowa can lift weights weighing up to 80 kg. Recently, she won the US Young Weightlifting Championship for ages under 11 and under 13 in the 30 kg weight category, becoming the youngest champion in the history of this tournament.

“That means you are the strongest girl in the world,” said Cavan, Rory’s father.

To that end, Rory spends 9 hours of gymnastics and 4 hours weightlifting each week. “I want to become healthy because it will do many things,” she said.

Cavan asserted that his daughter’s training process was carefully monitored, methodically and safe. Rory also has two doctors who are regularly monitoring.

Despite her good record in weightlifting, both Rory and Cavan insist that the seven-year-old girl prefers gymnastics. Previously, Rory also won a bronze medal in balance in a contest in Canada.

Rory likes to put fake tattoos on her hands during practice because “they’re cool”. Currently the girl does not intend to attend the Olympics, but just wants to encourage girls of her age to participate in weight training.

Thu Nguyet (According to the Euro Weekly News)