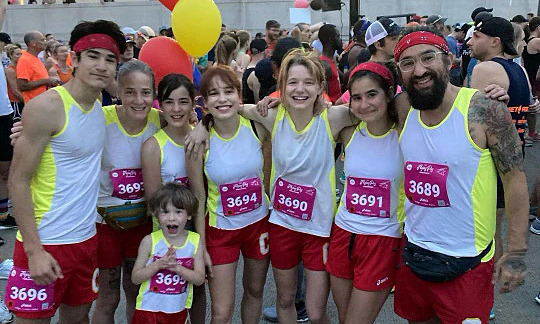 The Crawford family in the US has come under fire for allowing their six-year-old son to run a marathon.

Last Sunday, in the city of Cincinnati, Ohio (USA) took place the Flying Pig Marathon. A family of eight from Bellevue, together completed the 42.2 km in 8 hours and 35 minutes. Including 2 children under 12 years old and a child only 6 years old.

Immediately after, the social network erupted into controversy because these children had to run 42km. Many experienced marathoners and coaches think that 6 years old is too young to participate in a marathon.

Most people think that heavy exercise should not be given to children while their bones are still growing. Even at the age of 11, the growth process is not complete; Children who run marathons before puberty may be at risk for musculoskeletal problems in the future.

In addition, extreme exercise can also reduce serum HGH (human growth hormone) and testosterone levels in children who have not passed puberty. Many people question whether even if there are no long-term physical effects, practicing so much at such a young age will help children stick to the sport long-term. It is for the above reasons that the marathon requires participants to be 18 years of age or older.

“The organizers should not let a child who is only 6 years old participate in the tournament. When he ran 32 km, the child cried continuously because he was tired. The strange thing was that his parents even cheered him to try. run to the finish line. I don’t think so,” Olympic athlete Lee Troop commented on the incident.

In their defense, parents Ben and Kami Crawford say they never force their child to run and Rainier is excited about the race. “We let him make his own decisions about finishing the race and are ready to stop anytime if he wants to,” Crawford said. “Yes, there were tears, and yes, he fell but every member of our family cried during the race.”

This isn’t the first time the Crawfords have run together. In 2019, he published a book called 2,000 Miles Together: The Story of the Biggest Family Hiking the Appalachian Trail. (Rainier was only three years old at the time.)

sea ​​oats (According to Runningmagazine)