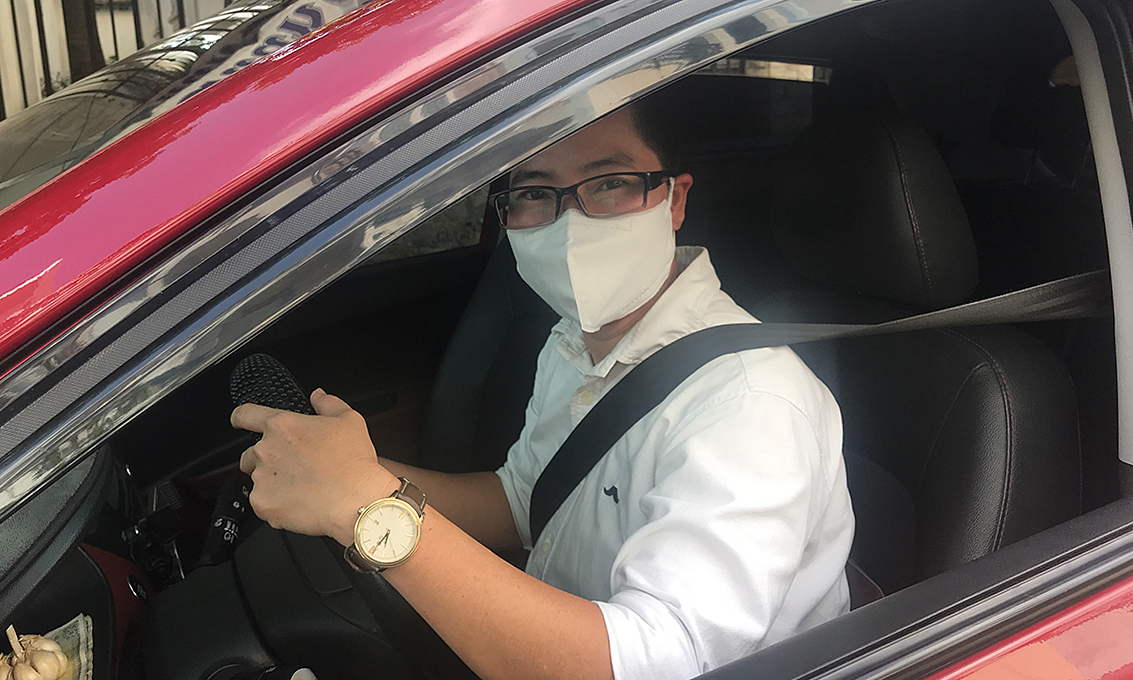 HCMCLove freedom, love to travel, Ms. Huyen is like a fish to meet water when she becomes a driver of a technology vehicle, after 18 years as a postal worker.

Taking a one-way passenger from Ho Chi Minh City to Da Lat, the female taxi driver Nguyen Thi Kim Huyen can easily stay for three days to explore the flower city. This is an experience that she would never have had if she were still the delivery officer at the post office. Driving a technology car gives her the freedom, to move continuously and meet many people.

Capital loves experience, she feels that the daily work just around the office is limited by four rather boring walls. In order to get to the streets and explore the city, since 2015, she started to sign up for GrabBike after each work shift. However, running GrabBike only goes short distances in the city, the furthest way to adjacent provinces such as Long An, Dong Nai, does not satisfy the desire to go here and there. By the end of 2017, she officially quit her job at the post office to become a professional GrabCar driver, when she was nearly 40 years old.

“Running GrabCar is very good, lots of experience, meeting many people. Each person is like a novel, when meeting a new person, we have more knowledge”, Ms. Huyen shared about the reasons for choosing a technology driver career.

Unforgettable memories of the female driver

Every day, making dozens of rides and meeting dozens of people, Ms. Huyen boasts that she has read the entire archive of “novels”. Out of countless memories, she remembers the most times when she is loved and respected by guests. Once she drove a guest to a party in Long An, invited her to a party with her, but she was shy and refused. Family members inevitably ran out and pleaded: “If you bring her here, then come and eat for fun”. The guest then introduced her as her grandchild, making her very happy. “Can not express emotions when many people consider themselves like family”, Ms. Huyen shared.

Sometimes she also has reluctant ride. Carrying customers from Binh Duong to Nguyen Van Qua alley (District 12), she was waved back by a few people and rushed to bring her family members who had just fallen in the toilet to go to the emergency room. Because she needed to save people, she turned on the emergency lights and ran a little bit fast. The police chased, she lowered her glasses: “Brother, I’m taking someone to the emergency room”. The brothers stopped being fined but encouraged her to continue running.

The ride is like in an action movie. “I ran while honking,” Ms. Huyen recalls. When she got to the hospital to stop the car, she helped her family members and the doctor carry a stretcher and then went back to the usual bus ride. Up to now, she does not know who she was carrying. The bus is free, customers cannot ask for a phone number to thank but she is not upset, because helping anyone in her ability is always ready.

Experience only the driving profession is available

“Every level of emotions in life, I have met through the ride. Someone is angry because of a job, they still express their attitude when stepping into the car. Someone gets on the car gently. Canceling when I had to go around 5 km to pick them up made me cry, but many people were ready to wait, making me really thankful, “Ms. Huyen said.

Not only meeting many people, thanks to running GrabCar, she was able to travel to many new lands, such as Da Lat, Vung Tau … Thanks to this job, she knew the beautiful cafes in the city, where she knew where to sell. Good food, good treatment place because many people booked cars there.

Technology driving also helped her change herself more. In the early days of running, she was quite fastidious, so she often got upset when customers demanded to lower the window of the car: “If you get drunk, why do you ride the car?” but also at ease. Long drive, she also learned more patience.

“The experience that technology car driving gives me is incomparable,” Ms. Huyen said. That is also the reason why she is more and more attached to this job.

For her, working should not be too serious about money, but the joy brought by work is something worth mentioning, so life becomes meaningful. Recently, she is one of the drivers that Grab has been grateful for for a long time. Customers value, partners appreciate to make her happier when driving, in addition to the experiences and knowledge gathered through each road.