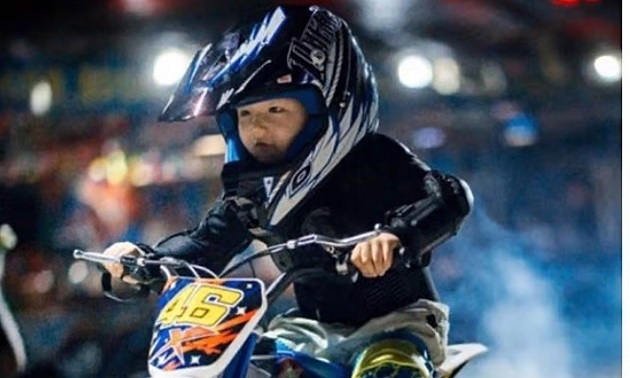 ChinaWhen the children are playing with toys and toy cars, Xia Boen spends most of her free time at the motorsports racetrack, dreaming of becoming a professional racer.

On a race track in eastern China, a small motorcycle is racing from one turn to another at high speed. This scene becomes especially special when the driver is a four-year-old boy. The wheel of the bike was smaller than his helmet.

Kindergarten boy Xia Boen from Nanjing, Jiangsu, spends most of his free time practicing at a motorsports track. He always closely follows domestic and international races and has a burning desire to become a professional motorcycle racer and compete in the world Grand Prix motorcycle race. The person Boen admires the most is the Spaniard Marc Márquez Alentà, because he is a winner and handsome.

At the age of two, Boen first showed his love for motorcycles, riding in the back of his father’s Harley-Davidson motorcycle, riding around the Chinese countryside.

A seasoned motocross racer, Boen attends racing training sessions at a professional racetrack four times per week. The boy’s father, Xia Fei, is an avid fan of motorsport and said his son can complete a 1.3 km lap in 76 seconds.

“Motorcycle racing has been my dream since childhood. I’m sad that it was never done. So when my son was crazy about this sport, I thought I should give him a chance,” said Xia Fei. .

The opportunity that Mr. Xia created for me costs quite a lot of money. A special children’s motorcycle imported from Italy costs 3,000 USD.

Some people think motorsport is too dangerous for young children, but Mr. Xia rejects this view. The father said he had taken every measure to ensure the safety of his son, although he admitted that motorsport is quite risky.

The father pays little attention to the misunderstandings and worries of people online when baby Boen races sports cars. “I’m knowledgeable enough about the sport to assess the risk. I believe professional training can reduce the danger. By far the most serious injury I’ve seen is a sprain. This incident is acceptable. “, he said and said everyone in the family supported Boen to pursue a motorcycle career.