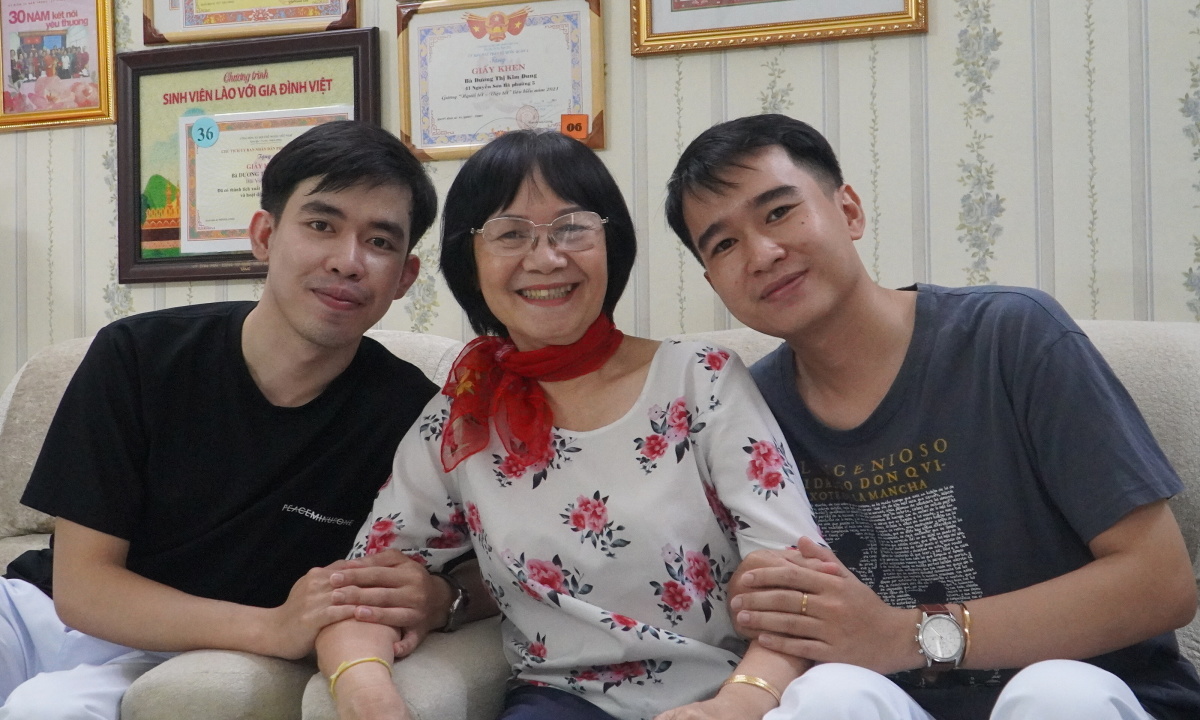 Ho Chi Minh CityOver the past 30 years, Mrs. Dung, 68 years old, the owner of a restaurant in Ward 5, District 3 has taken care of many people in need, provided food and accommodation for students for free during her university years.

More than 30 years ago, Ms. Duong Thi Kim Dung was a teacher. After standing on the podium for a while, she took a break to open a restaurant selling rice in order to have more time and conditions to do charity work. Her restaurant is a place to create jobs for dozens of people in difficult circumstances. Profits from the shop are converted into charity trips, donations to support the construction of bridges and houses of love.

In 2014, during a scholarship distribution in Cu Chi, Mrs. Dung was introduced by the president of the commune Pham Van Coi to a student named Nguyen Thi Tuyet Anh who had just passed the entrance exam to Pham Ngoc Thach Medical University, Ho Chi Minh City, but her family was poor. difficult, do not dare to enter school.

“That year, when I went to see her, she was 18 years old, but she was as small as a sixth grader,” Mrs. Dung said.

Tuyet Anh said that her mother had heart disease and could hardly work. My father returned home from the army, supporting the whole family with a salary as a security guard. Hearing the news that their daughter had graduated from university, the whole family burst with joy, but soon after was the worry of “where will the money go to send my children to school”.

After carefully researching the family situation, Mrs. Dung offered to adopt Tuyet Anh to live and live during her university years. At first, her parents were hesitant. They don’t believe that there are people who are so kind, afraid that their children will be sold. Understanding the family’s heartbreak, Ms. Dung turned to the local authorities for support. With the introduction of the chairman of the commune Pham Van Coi, Tuyet Anh’s parents felt secure to hand over their child. Before leaving Cu Chi, Mrs. Dung also tried to encourage: “The family can rest assured, I can take care of him, don’t let him miss school.”

In order for Tuyet Anh to quickly get used to the new environment, Mrs. Dung accepted another female student from the same school to share a room with Tuyet Anh to make friends. In the room on the third floor, the owner of the restaurant prepared the rice well, without missing anything.

There was a period when Tuyet Anh’s mother had to examine and treat heart disease, but the family did not have any money. The student girl did not tell, but Mrs. Dung still knew and borrowed the money herself.

“After I went to work, I had money, I sent all the money borrowed from my mother. The money was paid off, but the love is still there, I can’t pay it off,” said Tuyet Anh, now 26 years old, a doctor at Cu Chi hospital. .

Some people say why don’t you rent it out, you get ten million a month. Mrs. Dung explained, now that her husband has died, the children are all grown up and have their own houses, she is the only one left, she takes that money to do whatever, eats it all. “Instead, I let students stay for free, later on, their talented children will also help the society,” she said.

After Tuyet Anh, Quang Dai is one of the other poor students who were taken in by Mrs. Dung. Three years ago, every morning when exercising, Mrs. Dung’s friend caught a young man reading a book on a stone bench. That person asked: “Why don’t you go home to study?”. The young man replied, “I don’t have money to pay the motel”, then reached out and took out a packet of noodles from his pocket to eat. Seeing that scene, his friend was moved, so he called Mrs. Dung. Receiving the call, she woke up and rushed out to receive Dai to adopt. The young Dai at that time was studying Hospitality – Restaurant, because his family was too difficult, Dai had to live in the park for nearly a month.

Now Dai has graduated and is working for a bank. He remained attached to his adoptive mother. In his free time, he works in the kitchen to help sell rice. “If it weren’t for Dung’s mother, that day I might have dropped out of school because of poverty. My mother gave me a new life. I stayed here to help her and support students with similar circumstances,” Quang Dai said. .

Ms. Dung is raising two more Lao students, Khounphinit Sodalay (commonly known as Jack), 23 years old and Phrathepsouvanh Thipphakone (Axe), 24 years old. The two brothers went to Vietnam under the program “Laotian students with Vietnamese families” in 2019. After three months of participating in the experience, Jack and Ax asked to stay at Mrs. Dung’s house during their years of studying in Vietnam.

Both are studying general medicine, Pham Ngoc Thach Medical University. The two students consider this as a second family. During the epidemic season, Jack and Ax and Mrs. Dung participated in giving gifts to support poor people in the ward.

“Living a long time with Ms. Dung, we can feel her love for us. She not only nurtures but also teaches how to be human. Seeing the poor must help, what is bad must avoid and what is good, we should do” , Jack said.

In this house there is no boundary between occupants and owners, only love between an elderly mother and her children. It’s a happy house. In their free time, the two sons of the friend country show off their talents in cooking Lao dishes for the whole family to enjoy. People come together to exchange cultures for each other. “Laughter is always present here. This place is like my second family,” Ax said.

The restaurant has been open for 35 years, which is the same number of years that Mrs. Nguyen Ngoc Diep (also known as Mrs. Bay), 72 years old, lives with Mrs. Dung. In the past, Mrs. Diep from Vinh Long went to Saigon to find a job, knowing the difficult situation, Mrs. Dung accepted to help the restaurant until today. “At first, I accepted Mrs. Bay to work, then because I missed her so much, she asked me to move her up to live with me. I also agreed to accept all of them. Later on, all three of us took care of food, vocational training, and weddings. and stabilize life,” said Ms. Dung.

Neighbors around are now familiar with the scene of Mrs. Dung’s “crowded house”. Ms. Le Kim Mai, 62 years old, a few houses away, said: “Mrs. Dung here is no stranger. Not only feeding poor students and living for free, Ms. Dung also shares difficulties with neighbors in the neighborhood. , especially during the recent epidemic.”

Mrs. Dung confided that now that she is older, there is a worry that she thinks about every night. She worries if one day she is gone, what will happen to the children, and who is patient enough to take care of the poor students.

“Seeing that my children are obedient, obedient, and study hard makes me feel secure. I just pray that I have good health to help more difficult situations. Create joy for others to make myself happy. “, Mrs. Dung said.