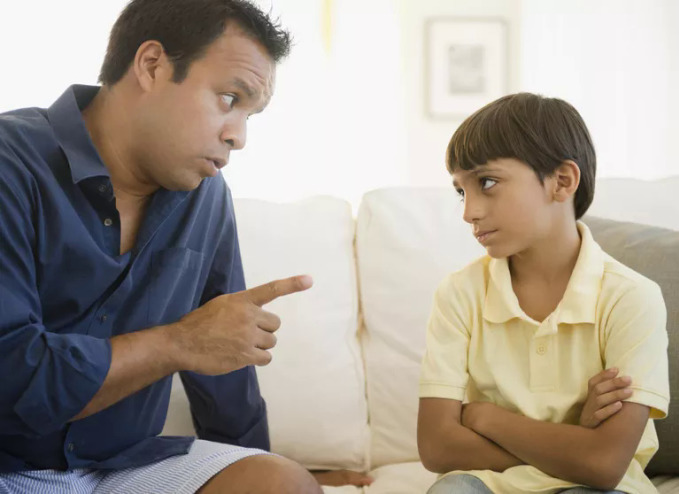 Wrong discipline not only doesn’t work, but it also causes anxiety and confusion in children.

Chad Brandt, an anxiety therapist, PhD in clinical psychology, University of Houston, (USA) said that when disciplining children, parents must ask themselves the question “what do you want the outcome to be”.

“The purpose of disciplining your child is to help them understand why what they did was wrong, so that they can learn and take action to correct that mistake,” says Brandt. He noticed some common parenting mistakes.

Many studies have proven spanking and other forms of violence are not good for children. There is evidence that physical discipline can change the structure of a child’s brain and spanking is not an effective way to help children act more positively.

Physical discipline also contributes to a cycle of misbehavior, making it difficult for children to imitate. “Parents don’t want their children to hit their friends if they’re at fault, but we do it to them,” says Dr. Brandt.

Fear of spanking exacerbates behavioral problems, making children more secretive from their parents. For example, they beat you but don’t tell your parents the truth or lie because they don’t want to be spanked. Brant believes that using physical discipline does not teach children to change behavior, but only teaches them to avoid.

Discipline is teaching children to understand why their actions were wrong and what to do in a similar situation in the future. The child who is punished develops a sense of self and emotions. So, according to Brandt, to punish children, parents must make decisions that show empathy. For example, if your child hits a friend because you stole a toy, ask him how he would feel if someone else hit him. Then, tell your child to politely ask you to return the toy or ask someone around for help. Finally, work with your child to practice the solution you just discussed.

Discipline is too harsh

Even if you don’t have to spank, you can still be too harsh with your child. For example, many parents choose time-out punishment (separating the child from an annoying situation, helping him calm down, thinking about what he has done, and drawing lessons by himself, such as facing the wall, standing in the room. corner of the house…), but stretching it too long, will be counterproductive.

“There’s a limit to how long a child can process information. For young children, that limit is very short,” said Dr. Brandt. Therefore, time out should be combined with another appropriate form of discipline to help children understand their behavior is wrong. Being too extreme will give rise to feelings of panic and fear in children.

For example, if your child eats sweets without permission, they won’t be able to eat dessert that day, but don’t make them fast for a week.

“The most important part of discipline is conforming to rules and consequences. In fact, consistency is more important than specific consequences, especially when children are young,” says Brandt.

One of the most common types of inconsistent parenting is to say “no” to your child. For example, if the child asks for an ice cream, the parents refuse. But the child still demanded and exerted some pressure, the parents gave in. This contradiction teaches your child that trying to cry is definitely not going to work.

“For children, it’s also difficult to understand when parents let them do whatever they want. Then suddenly one day, the children are still the same and they are scolded,” added Brandt.

The lack of consistency in parental discipline can also cause anxiety in children. They have a hard time identifying themselves as they should or should engage in defiant and defiant behavior to disguise their insecurities.

You may not always have the financial means to raise your child in a stable home, but parenting in a stable and consistent way is always within reach. Clarity, consistency, and positivity create an environment for children to admit their mistakes and become more mature.